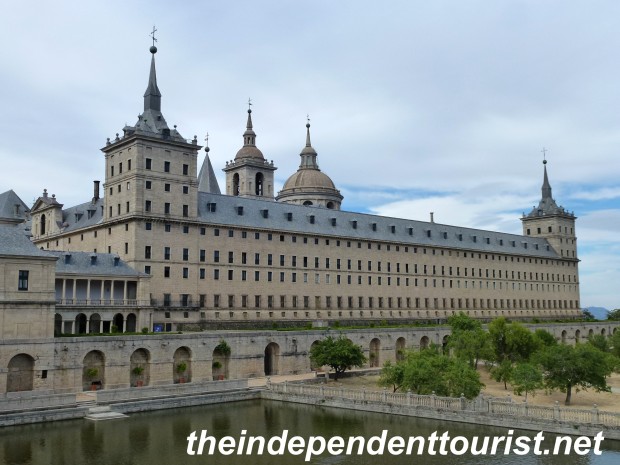 El Escorial is huge–a view from the western side.

El Escorial (the official name is The Monastery of San Lorenzo de El Escorial) is in a beautiful setting, on a hill looking towards Madrid, Spain with green tree-covered mountains as a backdrop. It is massive. Getting a good picture of the exterior is a challenge given the size of the building. It is very stern looking—some describe it as looking more like a prison than a monastery and palace. I would agree. 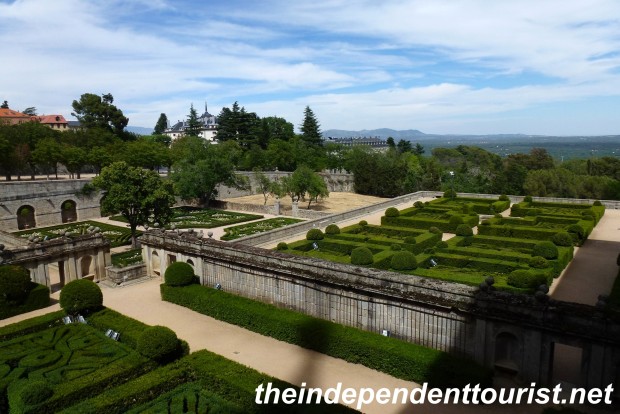 Looking out from the royal apartments onto the well-mainicured gardens.

While on business recently in Madrid, I had an afternoon free up and decided to visit this sight which is located about 48 km northwest of Madrid. I had missed the monastery during a previous holiday in Spain, so it was really a pleasure to have the opportunity to visit during this trip. 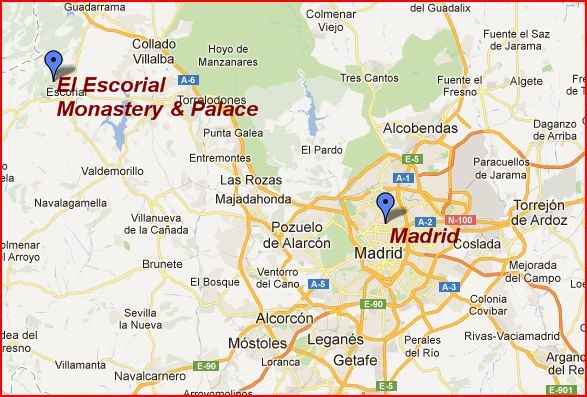 The monastery was built between 1563 and 1584 at the suggestion of King Philip II of Spain, who also closely supervised its construction.  Its uses were very clearly specified in a charter in 1565:  A convent for monks of the Order of St. Jerome, a church, a public and private palace, the royal and princes pantheons, a seminary, a school, a library, a hospital and rooms for scientific research. Many rooms are still in use today. The building is constructed from huge blocks of granite, and I cannot imagine all the blood, sweat and tears that went into cutting, hauling and placing these massive blocks, most of which are larger and taller than a person.

The northern (main) entrance to El Escorial (although used as an exit for tourists, the tourist entrance is on the eastern side).

Photographs are not allowed in most parts of the monastery, and it is heavily secured—there are security guards posted in just about every room along with cameras; however I was able to capture a few images, with permission. Tours are self-guided, either with an audio guide or just with the signage posted in Spanish and English.

The ceiling paintings in a main stairway.

Although I’m sure I saw just a small portion of the entire complex, I was able to see exhibits of the construction techniques, rooms where the royal family lived, the pantheon where the kings and queens are buried, a long hall with rooms of tombs of royal children who did not live into adulthood, and another long hall with amazing wall paintings of successful battles by the Spanish Kings, an incredible library—due to both the ceiling artwork and the priceless volumes it contains, and the basilica which is so huge it reminded me of St. Peter’s basilica in Rome, and various other rooms.

The artwork on the ceiling of the magnificent library.

The entrance to the huge basilica from the inner courtyard at El Escorial.

El Escorial’s pantheon–resting place of many kings and queens of Spain. 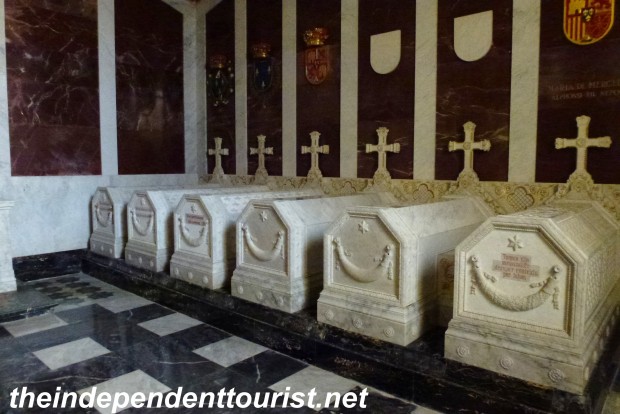 The tombs of royal children–many did not make it to adulthood.

There is a €10 entry fee and I would suggest allowing two hours for your visit. The town of San Lorenzo also is pleasant with many restaurants near the monastery.

Trains depart from Madrid hourly (I caught the Renfe train at the Nuevos Ministerios station, which is a metro and train station) and the trip takes just about one hour to reach the town of El Escorial. A round trip ticket was €7.60. 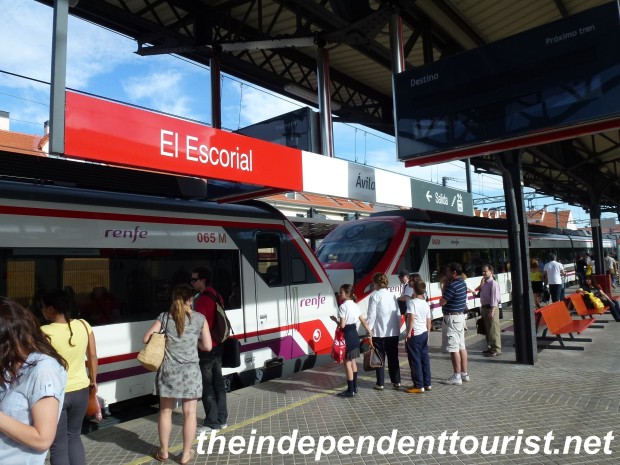 The train statiion at El Escorial. The trains are very clean and efficient.

The monastery is open until 8 pm during the summer, allowing a late visit if desired. Since this is a popular tourist attraction, I was surprised to see ample available auto parking available directly on the north side of the monastery, even in mid-June; however most people probably arrive by tour bus or train as I did.