Getting to Kuala Lumpur
The Kuala Lumpur international airport (KLIA) is very modern, clean and efficient. A taxi into Kuala Lumpur (KL to most locals) from the airport will take about 45 minutes and cost $25-30 US at current exchange rates (about 3 Malaysian Ringgit = $1). Another great way to either get to or from the airport is the KLIA Express train which costs about $10 and is quiet, smooth and fast. I took the Express back to the airport, about a 30 minute ride with no stops.

Kuala Lumpur is a huge city, very spread out, and really does not have a central “downtown” section.  There are several business districts. I stayed in Mid Valley City, which is a good location with several hotels, a huge megamall with restaurants, shops and theaters, and it is only about 20 minutes by taxi from the Petronas Towers (also known as KLCC). Taxis rates can be bargained in KL, and are quite cheap (it was about $4 between KLCC and Mid Valley City).

Since Malaysia was a British colony, English is very widely spoken, in addition to Bahasa Malaysia. 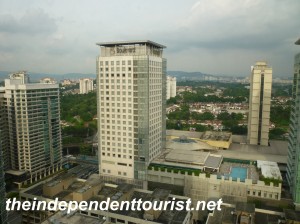 The megamall provides a good place to walk (if it’s raining!) and people watch. I think going to the mall is the main weekend activity for many Malay, especially the under 20 crowd. I stayed at The Gardens Hotel and Residences, which is connected to the megamall. I had a large room on a corner of the building with floor to ceiling windows and a panoramic view (see pictures below) for about $110 USD per night. 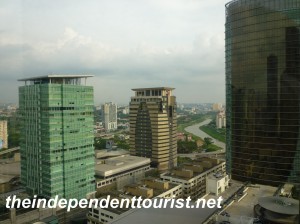 The Petronas Towers are the tallest twin buildings in the world (1,486 feet), and the fourth highest structures after the Burj Khalifa (Dubai), the Willis (Sears) Tower (Chicago) and the Taipei 101 tower in Taiwan. They are the premier sight in KL. 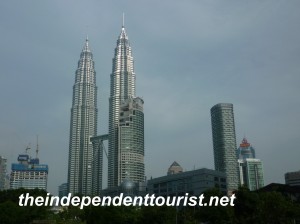 On Saturday morning around 10 am, after breakfast at a local outdoor food stall, my business colleague took me to the KLCC, where I learned that the tickets for that day were all gone. The ticket office suggested that I arrive before 8 am the next morning if I wanted to be sure I got a ticket.

The tickets for the KLCC are free, and distributed on a first come, first serve basis. Since I could not get tickets on Saturday, I went to Petaling Street instead (discussed below).

Not wanting to miss out on the Towers visit, I set my alarm for 6 am on Sunday morning, and arrived at the KLCC at about 6:40 am. To my surprise, there were already 60 or so people in line! Little did I know the line was just starting—people kept pouring in, and there were 300+ people in line by the time the ticket office opened about 8:30 am. I was glad I had brought a snack, water and my iPod for passing the time while waiting in line. I also enjoyed chatting to others in line next to me, and talked to people who were visiting from all over the world. My guess is that the lines were longer at that time due to summer holidays (August). 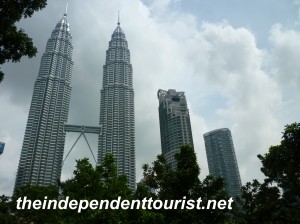 As the line moved forward, a large screen kept us informed how many tickets were left for the designated tours (every 20 minutes) throughout the day. Once I had my ticket, I visited the small visitor’s display and then at the appointed time (with our escort guide), our group of 15 or so watched a short film and then went up to the Petronas Towers skybridge on the 41st floor for our view. The skybridge is a unique engineering feat, not directly tied into either tower to allow movement and flexibility. It is the highest skybridge in the world at 558 feet above ground. We were given about 15-20 minutes to look around and then escorted back down. 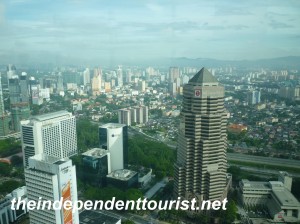 Since the only way to get tickets for the KLCC is get there early and stand in a long line (no online tickets or advanced purchases), I was surprised at how many people come to visit the KLCC. In addition, the observation skybridge is only on the 41st floor (out of towers’ 88 floors). I guess it’s just the attraction of visiting the tallest twin towers in the world, even though they are no longer the tallest buildings in the world. Unless you just want to say that you’ve been up the towers, frankly I would not bother, unless you are a student of architecture. It’s much more interesting to visit the Empire State building in New York City, or the Willis (Sears) Tower in Chicago, for example—and you can stay as long as you want on the observation floor! The KLCC also has a large underground shopping mall, directly below the towers, known as Suria KLCC. 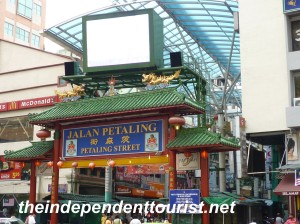 I did take the time to visit Petaling Street (about 10 minutes by taxi from the KLCC). This is a famous shopping street in KL, filled with numerous small shops, with people hawking all kinds of goods, including many pirated CD’s and DVD’s. I also walked through the food stalls and meat markets. The strong odor of all kinds of freshly butchered meats and displayed fish and sea creatures in the warm, humid air was a bit more than I could take, and I was happy to get out into the fresh air. 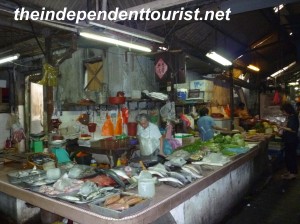 There is a monorail (luckily air-conditioned) service that covers parts of KL (the closest station, KLCC, is about a 5 minute walk from the KLCC itself). I rode the monorail to the Jalan Bukit Bintang station and visited the “Bintang Walk,” an area where there are foot massage parlors on every corner, Asian restaurants, and upscale shopping close by. 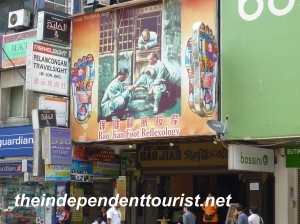 One of many foot massage parlors, Bintang Walk

Looking back, I wish I would have tried one of the foot massage parlors, it would have been a relaxing and fun experience, I’m sure.  However it was hot, I was tired, and I was ready to head back to my cool air conditioned hotel room.

Other Tips About Visiting Malaysia

I recommend that you always carry an umbrella. It rains often, with little warning, and the water comes down in buckets. Since KL is close to the equator, be prepared for high humidity all year long. The food in Malaysia is a mix of many different cultures, if you like spicy food, interesting seafood and unusual fruits and are little adventurous, you’ll enjoy it.  There are also many U.S. fast food and chain restaurant options.

Malaysia has many beautiful locations, is relatively inexpensive, and is not highly spoiled by tourism yet. In another post, I will share a day trip to the old Portuguese port of Malacca (or Melaka) from Singapore.