We visited Malta as part of our trip to Sicily in April. It was a good time of year to visit weather-wise.  The temperatures were warm and sunny but not hot. Malta is only about 90 kilometers from Sicily, and we spent two nights and one day in Malta. We took a ferry (Virtuferries.com) from Pozzallo, Sicily to Valletta, Malta.

The trip was about 90 minutes each way.   At the time, it cost about $110 per person roundtrip. It is also possible to fly from Catania on Air Malta, but it costs more and would likely take more time. Since the ferry is Maltese, the schedule is less convenient if one is traveling from Sicily to Malta than vice-versa. A lot of Maltese take day trips to Sicily to visit the mountains and escape the heat of Malta in the summer. So, we left Sicily late in the evening and returned early in the morning two days later.

Malta is very dry, rocky and the most densely populated country in Europe. The main island of Malta is small with a lot of traffic in a tightly congested area around Valletta, although outside the city the roads are a lot less busy. 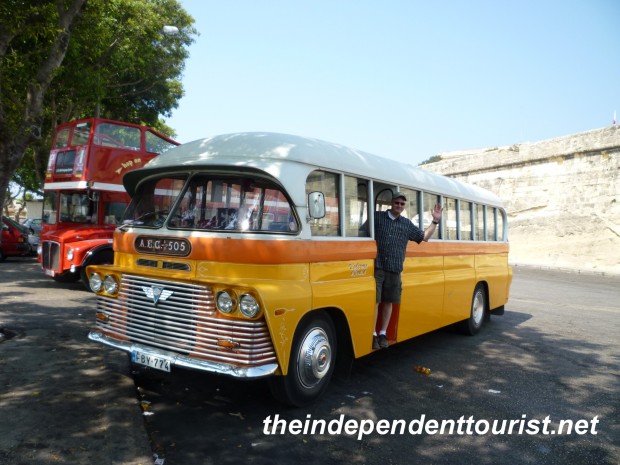 Maltese Bus (all are the same retro style)

We rented a car (driving is on the left side), so we could have the freedom to see what we wanted—however we would suggest a good map-via a PDA/phone or GPS system, given the somewhat confusing road system and signage outside of Valletta. The local bus system would be a good alternative to driving. Visitmalta.com is a great website for learning about this country, and they have podcasts on a variety of topics, including information all about the movies filmed in Malta.

Given the recent history as a colony of the UK, English and Maltese are the official languages, and Italian is widely spoken. Malta’s long history means that there is a lot to see and do. It is full of prehistoric sights and more recent historic events—in particular the influence is evident of the Knights of Malta in the 1500’s, giving Valletta and the surrounding harbor its massive fortifications.

We used our Hilton Honors points and stayed in the Hilton in St. Julians, a very good location, about 15 minutes from Valletta. Many of the hotels on the island are located in this area. In one day we were able to visit the Hal-Saflieni Hypogeum, the old capital or “silent city” of Mdina, the ancient temples of Hagar Qim and Mnajdra, and the city of Valletta, all without feeling rushed.  We had considered hiring a tour guide for the day, given the shortness of our visit, however the guides we checked out wanted €150-200 for the day, plus a car rental, and we decided we could do our own tour easily enough. 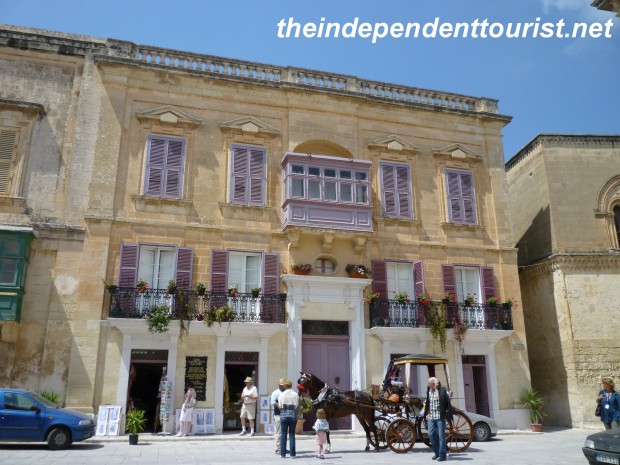 The Hypogeum, an underground prehistoric temple, was discovered by accident in 1902.  It is underneath a building on a modern street. Without the sign on the building, there would be no way of knowing what lies underneath. A guided tour is the only way to see it and the number of visitors allowed each day is limited to 80. In our opinion it was worth it, even if a bit overpriced (about $28 per person).   We could not take pictures inside the temple. We bought our tickets ahead of time (online) to avoid the chance of tickets being sold out due to tour groups and cruise ships. Ticket Information can be found on visitmalta.com. 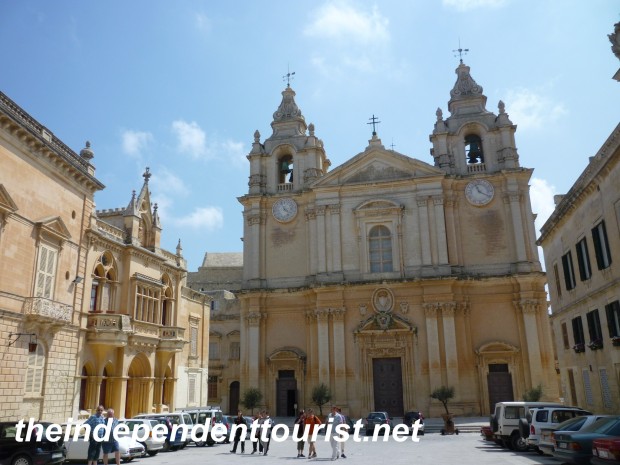 The city of Mdina, the old capital of Malta, is quite beautiful. It is called the silent city due to a lack of traffic in the old part of the city. The city sits on a slight hill, giving it a good defensive position and providing a good view of this part of the island.

There is plenty to do here in wandering the streets, visiting the co-Catherdral of St. Paul, taking a carriage ride, visiting the dungeons, and other exhibitions.

We then drove out to the temples of Hagar Qim and Mnajdra (they are within walking distance of each other).

These temples are on the other side of the island from Valletta, and the rural roads on that side of the island can be potholed and bumpy! These are some of the oldest man-made structures in the world (perhaps 3,500 BC). The temples are near the coast, above ground, and covered with a tent-like material (similar to the Denver airport main terminal roof) to protect them from the weather. It is possible to wander around and through the structures.

Our final stop for the day was Valletta. We found a parking garage close to the town and walked up to the main entrance to the old town. Our biggest mistake was getting something to eat before visiting the co-Cathedral of St. John. To our dismay, we found out that it closes at 4:30 pm, and we missed seeing Caravaggio’s “The Beheading of Saint John the Baptist” (completed in 1608). This was a huge disappointment, in addition to missing the Cathedral itself.  Be sure to get there before 4:30 pm! We loved the architecture of Valletta. Our favorite spot was the Upper Barraka Gardens, where we had a beautiful view of the harbor—pictures cannot do it justice, it is a beautiful setting. While we were there, we saw a cruise ship leaving and the Maltese cannon salute!

We would love to go back to Malta. We did not get to the beaches given our short stay. It would be a great vacation spot for at least a week with all the historical sites and beaches (including Gozo and Comino islands).