The castle grounds are beautiful.

If you want to visit a castle and not leave the U.S., Hearst Castle is your place. Although not old compared to the castles of Europe, Hearst Castle reminded me of those magnificent structures and for good reason.

Another view of the castle exterior.

Hearst Castle is now a California state park. The setting is superb, in the hills overlooking the California coastline, near the small town of San Simeon, about half way between San Francisco and Los Angeles.

One of the entrances to the castle.

Much of the interior décor was imported from Europe and the mansion is essentially a museum with priceless works of art from all over the world. 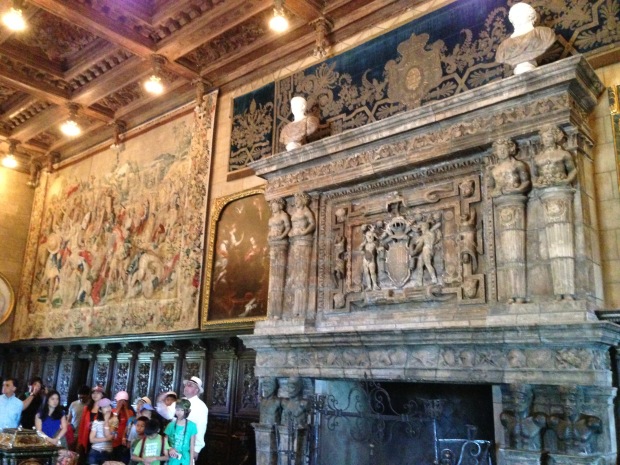 The grand reception room. Where arriving guests would have gathered.

A parlor for after dinner drinks and smoking.

William Randolph Hearst (1863 – 1951) was a publishing magnate (newspapers, magazines) and spent a good part of his vast fortune building Hearst Castle on property where he had spent his youth camping with his family. His desire to build the castle began early. At about 10 years of age, he accompanied his mother on a year-long trip to Europe and gained a love for and fascination with European architecture, art and culture.

Unusual for the time, he hired a woman, Julia Morgan as his architect to design and oversee construction of the castle. Construction started in 1919 and continued for almost 30 years—to this day it is not complete. Hearst kept changing his mind and expanding his vision of what the castle and grounds should be. The engineering and logistics required to build the mansion in these hilltops and in this relatively remote location boggle the mind.

The indoor Roman pool, located underneath the tennis courts. There are more than a million Murano glass tiles here, some with a layer of gold leaf inside. The pool is 81 ft. long.

The famous Neptune Pool, with statues and Roman columns from Europe. The pool is undergoing some repair work currently. 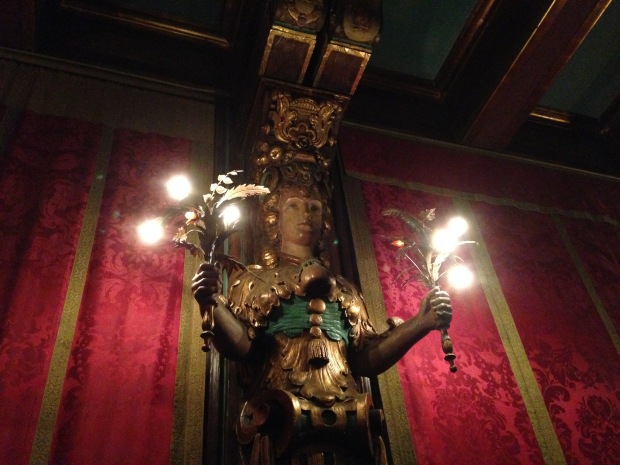 Inside the theater room for showing the latest Hollywood productions. Charlie Chaplin was a frequent guest at the castle.

He even built an airstrip to make it easier to bring in supplies and guests. Hearst hosted the elite of Hollywood, political leaders and many others here. It was an incredible honor to be invited to Hearst Castle during its heyday. 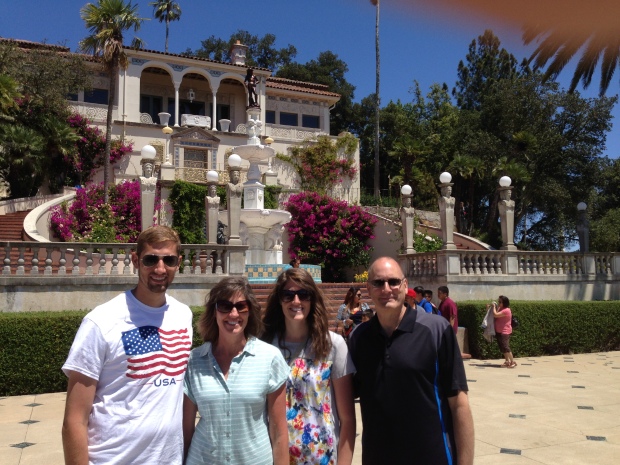 One of the guest “cottages” as Hearst Castle.

Information on the castle can be found here. There are 3 main tours offered. Although the location is somewhat remote, Hearst Castle receives (and is prepared for) hoards of visitors. They have a large visitor’s center, museum and huge IMAX theater with a film about the building of the castle. Your ticket provides a specific time for your tour and buses take you from the visitors center up the road (about 15 minutes) to the castle. Plan on 2-3 hours for your visit. Also, about 3 miles north of San Simeon is a elephant seal beach area, where we saw probably 30 or more seals enjoying the sun and sand. It’s well worth the 10-minute drive to see these huge creatures laying on the beach enjoying the comfortable surroundings.

Elephant seals on the beach just north of Hearst Castle.

The entrance to Rhyolite.

When I think of “ghost towns” what normally comes to mind for me is a mining camp or old railway stop from the 1800’s with a few wooden structures. By comparison, Rhyolite is a relatively modern ghost town from the early 1900’s. It is located near the small town of Beatty, Nevada on Highway 374, one of the main entrances to Death Valley National Park. The town is now a national historic site. Mining was a major industry in this area in the 1800’s and early 1900’s. In Death Valley National Park, there were an estimated 6,000-10,000 mines.

Rhyolite is about 120 miles northwest of Las Vegas, NV. 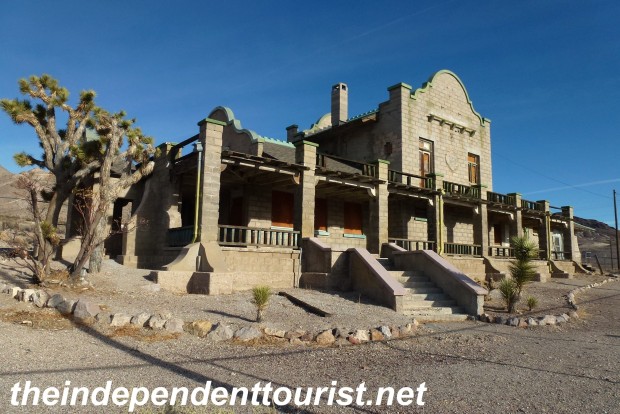 The Las Vegas & Tonopah Train Depot, erected in 1909. One of the three railroads serving Rhyolite.

I think this caboose is here for the duration…

Rhyolite was a boomtown whose economic heyday lasted 4 years, although the town survived for about 15 years. It all began when prospectors Shorty Harris and Ed Cross found gold in the area in 1904. The townsite was established in 1905.

Funding for the mining decreased due to the San Francisco earthquake in 1906, which destroyed the California Financial District, and then the New York Financial Panic of 1907. Even still, by 1908 the population of Rhyolite was 8,000, a pretty good-sized town for the area and time, but shortly thereafter the mines began to fail.  By 1910, the population was declining, and in 1919 the Post Office finally closed. By 1920, there were just 14 people left in Rhyolite.

The Cook Bank Building ruins – it cost $90,000 to build in 1908, a small fortune. The building included a Post Office in the basement, bank on the first floor, and business offices on the second and third floors. It also had electric lights, steam heating and marble floors all of which must have made it a showpiece in its day.

Tom Kelly’s three-room bottle house (visible wall is built out of bottles) – built by Tom Kelly in 1906. He wanted to raffle it off – not sure if he was successful. Use of sustainable materials would make the house popular today! 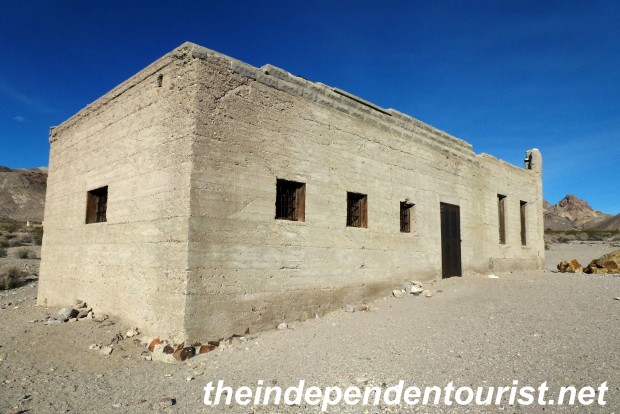 The Rhyolite town jail. Erected in 1907. It’s near the Red Light District – hmm…wonder why?

Ruins include a few homes, bank, school, mercantile, jail and train depot. Beatty is about 2 hours from Las Vegas, NV, and Rhyolite is about 5 miles west of Beatty. Keep in mind summers here are HOT. We visited in December and the weather was cool and pleasant.