The entrance to Rhyolite.

When I think of “ghost towns” what normally comes to mind for me is a mining camp or old railway stop from the 1800’s with a few wooden structures. By comparison, Rhyolite is a relatively modern ghost town from the early 1900’s. It is located near the small town of Beatty, Nevada on Highway 374, one of the main entrances to Death Valley National Park. The town is now a national historic site. Mining was a major industry in this area in the 1800’s and early 1900’s. In Death Valley National Park, there were an estimated 6,000-10,000 mines.

Rhyolite is about 120 miles northwest of Las Vegas, NV.

The Las Vegas & Tonopah Train Depot, erected in 1909. One of the three railroads serving Rhyolite.

I think this caboose is here for the duration…

Rhyolite was a boomtown whose economic heyday lasted 4 years, although the town survived for about 15 years. It all began when prospectors Shorty Harris and Ed Cross found gold in the area in 1904. The townsite was established in 1905. 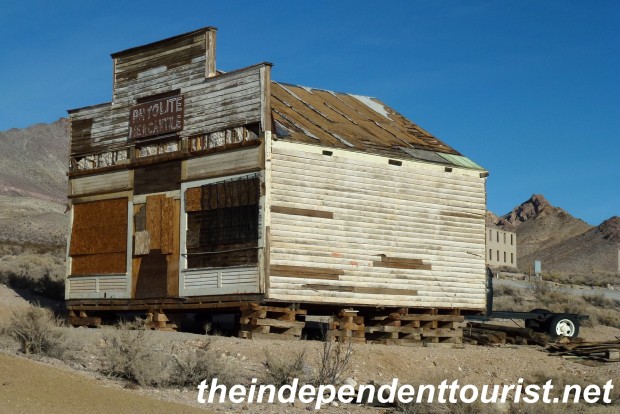 Funding for the mining decreased due to the San Francisco earthquake in 1906, which destroyed the California Financial District, and then the New York Financial Panic of 1907. Even still, by 1908 the population of Rhyolite was 8,000, a pretty good-sized town for the area and time, but shortly thereafter the mines began to fail.  By 1910, the population was declining, and in 1919 the Post Office finally closed. By 1920, there were just 14 people left in Rhyolite.

The Cook Bank Building ruins – it cost $90,000 to build in 1908, a small fortune. The building included a Post Office in the basement, bank on the first floor, and business offices on the second and third floors. It also had electric lights, steam heating and marble floors all of which must have made it a showpiece in its day. 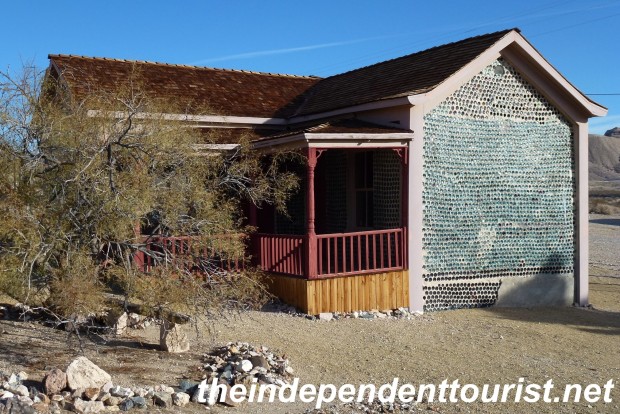 Tom Kelly’s three-room bottle house (visible wall is built out of bottles) – built by Tom Kelly in 1906. He wanted to raffle it off – not sure if he was successful. Use of sustainable materials would make the house popular today!

The Rhyolite town jail. Erected in 1907. It’s near the Red Light District – hmm…wonder why?

Ruins include a few homes, bank, school, mercantile, jail and train depot. Beatty is about 2 hours from Las Vegas, NV, and Rhyolite is about 5 miles west of Beatty. Keep in mind summers here are HOT. We visited in December and the weather was cool and pleasant.