In his book, Images of America: The Black Canyon of the Gunnison, Duane Vandenbusche put it best by saying, “Several canyons of the American West are longer and some are deeper, but none combines the depth, sheerness, narrowness, darkness, and dread of the Black Canyon.” With depths ranging anywhere from 1,800 to 2,722 feet (at Warner Point) and a width of only 40 feet at its narrowest point along the river, Black Canyon of the Gunnison owes its name to the fact that some places along the canyon only receive 30 minutes of sunshine each day. Black Canyon of the Gunnison was made an official National Park in 1999 so that visitors could enjoy the spectacular views, the daring climbs, the breathtaking (literally) hikes, and the Class V rapids that the canyon offers. The National Park encompasses 14 miles of the 48 mile canyon. 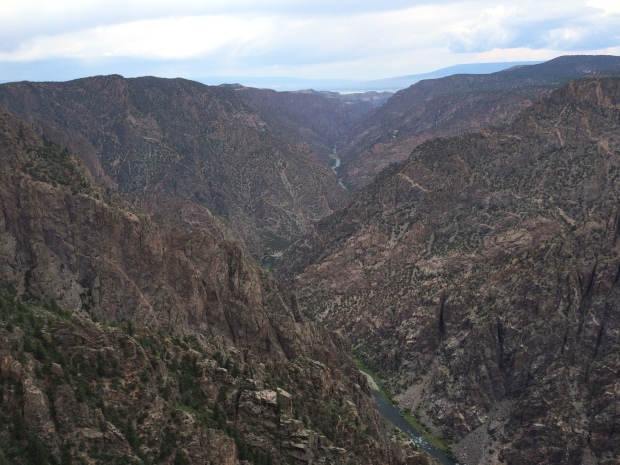 A view of the Black Canyon, looking North West, taken from Sunset View

In our recent adventure to the Black Canyon of the Gunnison National Park, my father and I somewhat tiptoed the line between bold adventurer and casual sightseer. We decided to descend into the canyon following the Gunnison Route, which is the most popular, and supposedly the “easiest” route to the bottom. 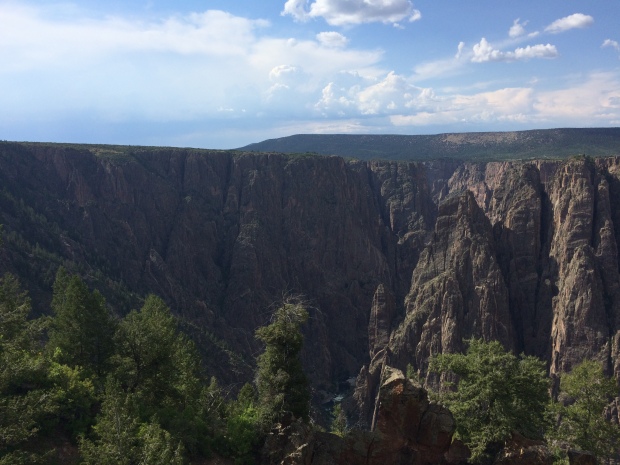 Permits for the descent to the river are required and are issued (free), on a first-come first-serve basis from the visitor center. To that end, we arrived at the South Rim Visitor Center when it opened (8 am), applied for our permits, and got an early start to, what we figured to be a physically exhausting day. 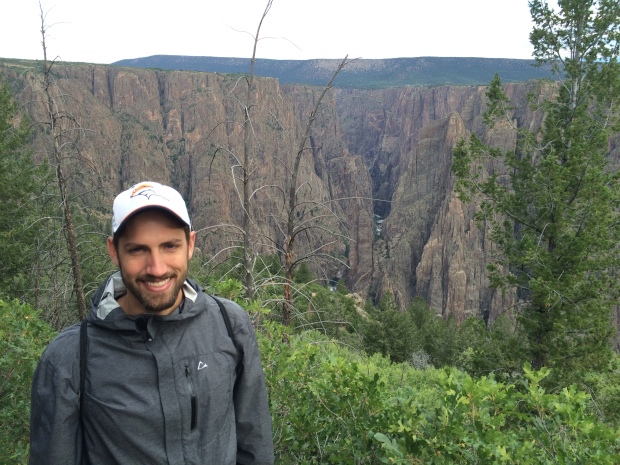 Taken along the descent into the Black Canyon

The Gunnison Route begins at the South Rim Visitor Center and initially follows the Oak Flat Trail for 1/3 miles until you reach a sign, “River Access. Permit Required.” 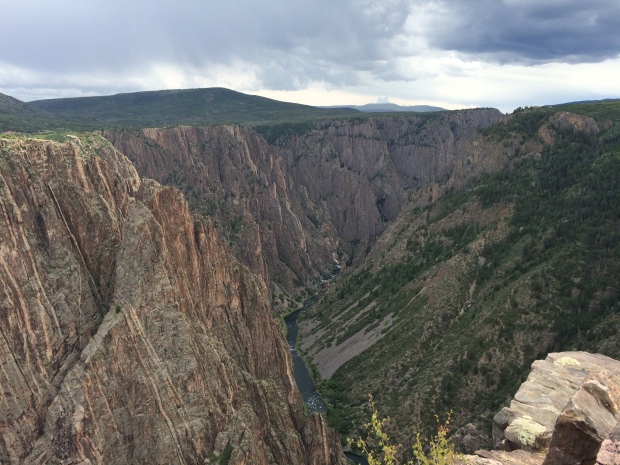 At that point the true descent begins. The descent is steep, but very doable, we just made sure to take it slowly, and followed a drainage nearly the entire way to the river. 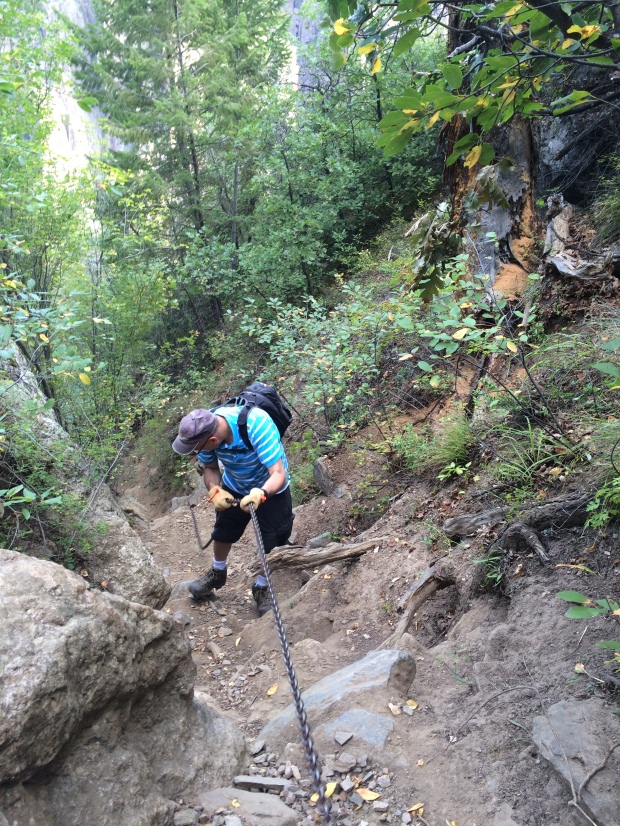 My father, Paul, using the chain to help with the descent

About 1/3 of the way down, there is an 80 foot length of chain to hold onto. Although the chain isn’t necessary to use, we found it helpful for extra balance. 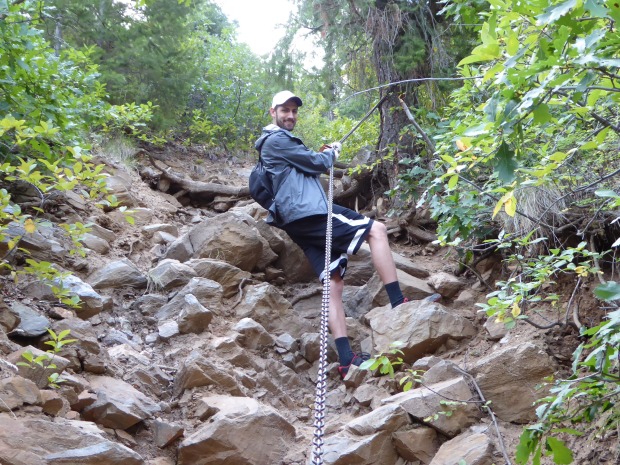 I too, found the chain to be helpful

As we descended closer to the river, the temperature began warming up and it seemed as though we were entering a lush paradise, complete with thick foliage and stunning views of the rushing river and towering cliffs. 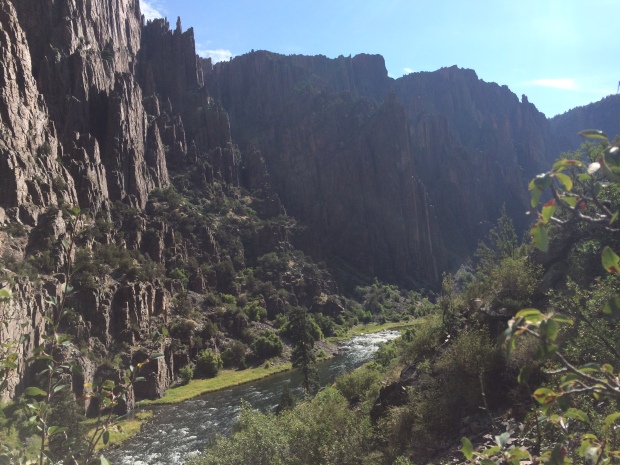 Our view as we neared the bottom of the canyon

Along the river there are several backcountry campsites available. Although we had originally thought about camping in the canyon we decided to camp at the South Rim Campground and descend into the Black Canyon as a day hike. 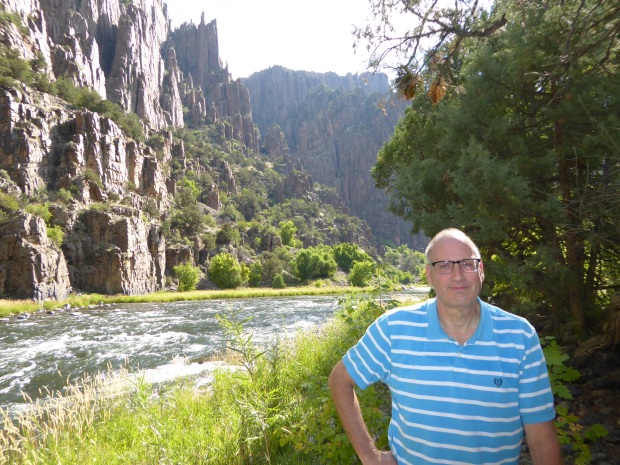 Taken near the campsites along the river

Total, the hike took us about an hour and a half each way. Remember that the descent into, and the ascent out of the canyon is about 1800 foot change in altitude, so be prepared with good hiking shoes, water, snacks, knee braces, ankle supports, etc. We also found it extremely helpful to use gloves while descending/ascending the portion of the trail that has chain. 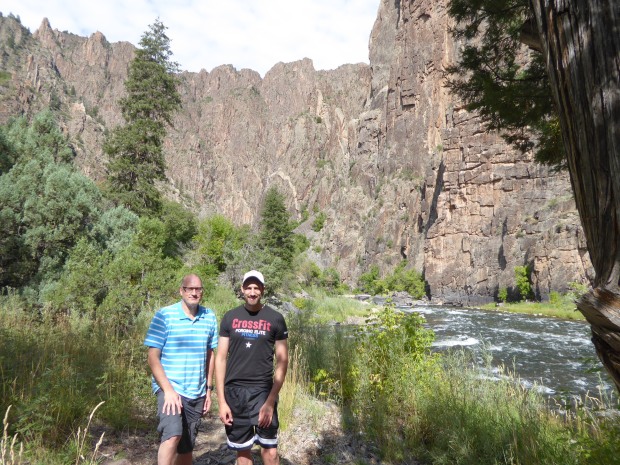 My dad and I near the campsites. Happy to have successfully descended into the Black Canyon, but nervously awaiting the ascent.)

The South Rim of the Black Canyon of the Gunnison National Park is roughly 15 miles from Montrose and 64 miles from Gunnison. To get there from Montrose take Colorado State Highway 50 (Main St. in Montrose) heading East. After about 7 miles you’ll exit onto Highway 347 heading North East. Follow the highway for about 7 miles into the National Park. 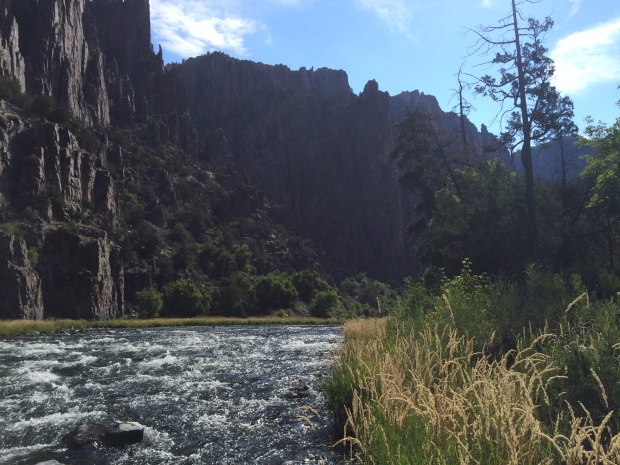 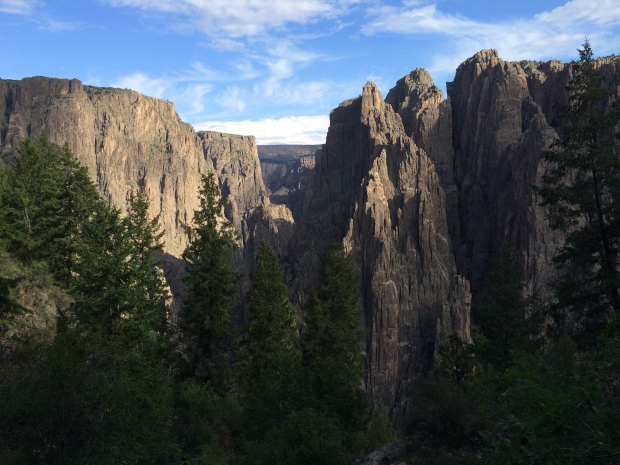 A view the Black Canyon, not far from the South Rim Visitor Center