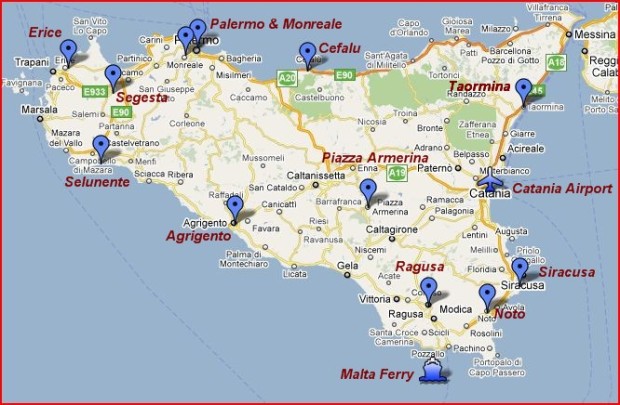 These three locations are the main Greek Temple sites in Sicily. From Piazza Armerina we drove through Barrafranca and Pietraperzia on our way to Agrigento. The springtime clear air and verdant green hills made this 2.5 hour drive very enjoyable.

Temple of Castor and Pollux (city of Agrigento in background).

We had heard that the scenic aspects of the Valley of the Temples in Agrigento was somewhat spoiled by the city being so close to the site. We were pleasantly surprised that the view is still quite beautiful, and the Temples sit on a wooded ridge between Agrigento and the sea. The site is large, so plan on a good walk to see the various temples. We visited in the afternoon and the light was perfect since the sun was setting over the Mediterranean. 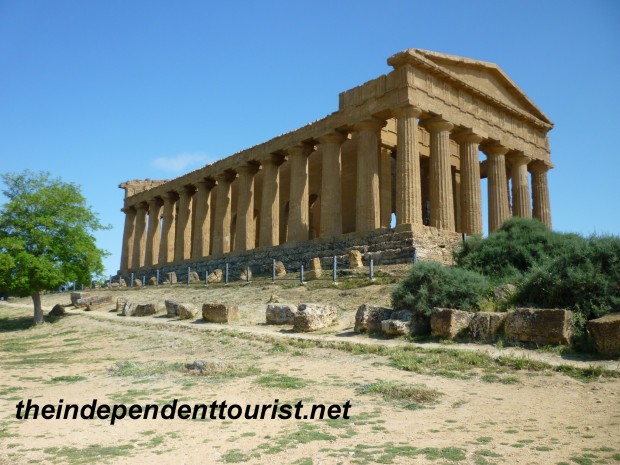 Our B&B was in the center of the old part of Agrigento high up on the hill, and had a fantastic view of the Valley of the Temples.  Several of the streets were just wide enough for a small car to pass with about 1-2 inches to spare on each side. Most tour buses go directly to the temples and do not go into Agrigento. We would recommend a visit to the old part of the city. We found a good restaurant and enjoyed climbing stairs between the levels of the old streets. We stopped at the Convento di Santo Spirito and just peeked in since it was getting ready to close. The nuns saw us and invited us in for a look and in Italian did their best to explain to us the various features of the historic abbey-very friendly people. 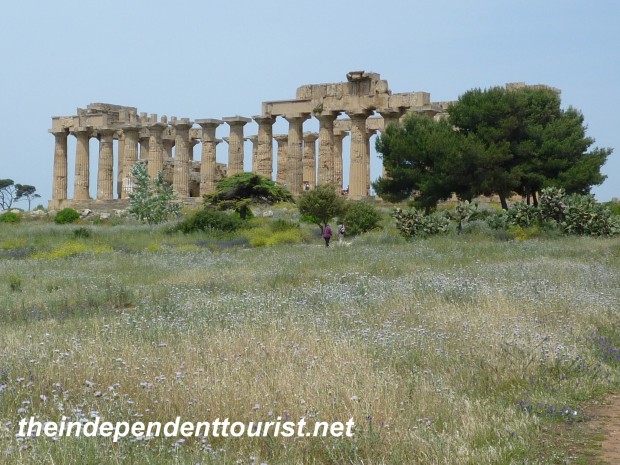 The next morning we drove to Selinunte (northwest along the southern coast), with a short detour through the hill top town of Caltabellotta. Of the three temple sites, Selinunte was probably the least interesting, although it has a great setting on the coastline. The site is very spread out—it is about a 15-20 minute walk between the two main temple areas (the Acropolis and the Eastern hill). If one is rushed for time, be sure to visit Temple E (490 BC) on the Eastern hill, which is closest to the main parking. The main thing I enjoyed was hiking around the ruins of Temple G (Eastern hill) with the tumbled columns and being struck by the size of the blocks for the columns.  How did they erect and assemble such huge stones for these temples? Amazing.

Segesta. Don’t miss Segesta. It is about 40 miles north of Selinunte, not too far off the road on the way to Palermo. This temple is in the countryside, and in a very peaceful setting. The temple was never finished. The car park is close to the temple. On the hill just to the east of the temple there is a 3rd century BC Greek Theater and the ruins of the ancient town of Segesta.

The view of the valley and temple of Segesta is incredible from the Theater. There are buses every 30 minutes that take visitors up to the Theater, or it can be walked.  I wish we had walked down to the car park rather than taken the bus given the picturesque views of the temple.