On a business trip to China in August 2010 I was in Beijing and took the opportunity to visit the Temple of Heaven complex. I had seen pictures of the round Temple, but I had no idea it was part of such a large complex covering about 675 acres on the south side of Beijing (to see more of Beijing click here).

Beijing is laid out in a series of concentric “ring roads” with the main historical area (Forbidden City and Tiananmen Square) in the center ring. I stayed at the Ascott Hotel on the west side of Beijing, about 15 minutes by taxi from the Forbidden City and about 15-20 minutes from the Temple of Heaven. The Ascott is a great business hotel, and my room (with a corporate discount) was less than $150/night. The rooms are large-actually small apartments with a clothes washer, small kitchen and living room. It is also within walking distance of the “Beijing Friendship Store” on Jian Guo Road which has about 5 floors of packed shopping stalls with everything you can imagine for sale-be prepared to be hounded by the shopkeepers!

I arrived at the North Gate of the Temple of Heaven after a $4 taxi ride from the Ascott, and paid about $10 for the entry fee, which included not only the Temple of Heaven itself, but some of the other important buildings on the site as well. (Be sure to verify what your ticket provides access to, since there are a few options). There is a nice souvenir map available at the ticket office. 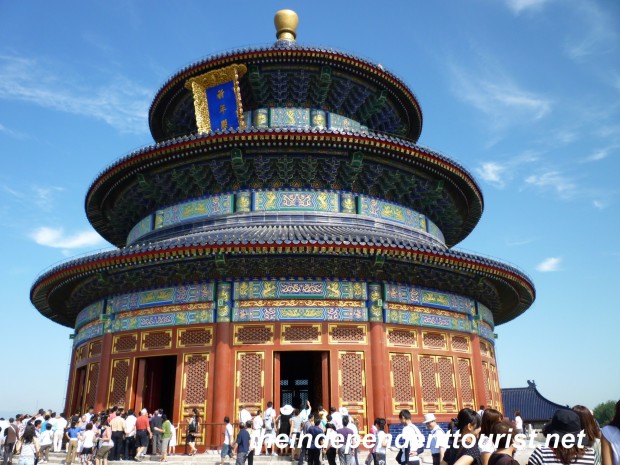 The Temple of Heaven (or “Hall of Prayer for Good Harvests”) was built in 1420.  The other buildings date from the 1400’s and 1500’s. The Emperors’ annual procession (must have been quite impressive-over a mile long and included elephants, musicians, imperial guards and other officials) began in the Forbidden City and marched south to this complex. The extensive, tranquil gardens provide a good buffer to the exterior world. The Temple of Heaven is where Emperors would offer sacrifices and pray for a good harvest. The Emperors also lived here and fasted during the ceremonies, keeping themselves focused in a state of worship. 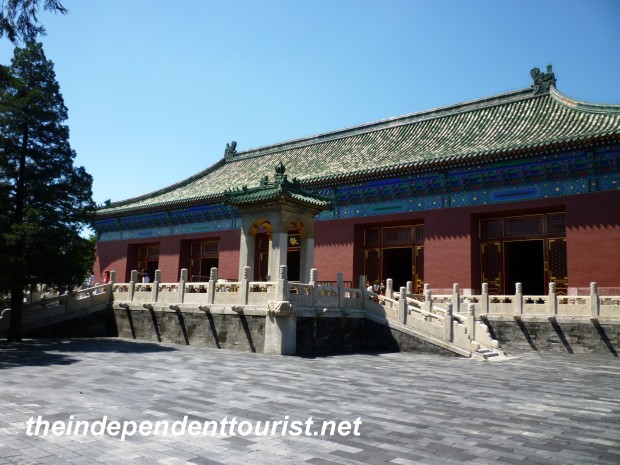 In addition to the Temple of Heaven, visit the Hall of Fasting, the Imperial Vault of Heaven, the Echo Wall, the Circular Mound Altar and the Divine Music Office, which has a display of interesting instruments and huge drums.

A long covered walkway protected the sacrifices as they made their way from the Divine Kitchen to the altar in the Temple of Heaven. The walkway is open, but the kitchens and butcher house were not open during my visit.