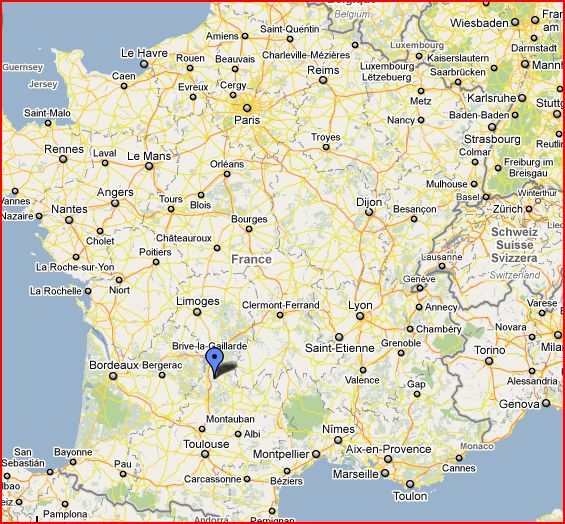 Rocamadour is in south-central France

The Dordogne region and in particular the village of Rocamadour should be on everyone’s must-visit list in France. We have been to Rocamadour twice, and both times I was impressed how stunning the setting is—an almost vertical village nestled into a rock face on the side of the gorge of Alzou. The Dordogne region is full of many river gorges and rock cliffs with homes and villages built into the rock. In many cases, the cliffs provide a natural rear wall for the buildings.

Rocamadour (the Château is at top of cliff, the Basilica is the large building below the Château)

The village gets its name from St. Amadour, his body was said to have been found in an ancient niche (located in the Church square described below) in an undecayed state, and many miracles, mainly healings (at least 126) followed. Rocamadour became a very popular pilgrimage site in the 1100’s based on these miracles. During the Middle Ages, pilgrimage sites existed throughout Europe. These sites were typically associated with Christian relics and miracles. The rich and the poor would travel long distances to these sites to worship, be healed and forgiven. Kings and Lords of both England and France have travelled to Rocamadour. The village was occupied by the English in 1369 during the Hundred Years war.

The only convenient way to visit the Rocamadour is with a car.  There is a tourist information office at the top of the cliff, on the main road just across from the Château and also in the town itself.

Rocamadour is a one (pedestrian) street town, with gates at either end, and parking is found either outside the Port du Figuier (east gate-very small parking lot), or below the village at the bottom of the gorge. Be prepared for lots of steps up to the town, and then up many more to visit the many chapels and Basilica of St. Sauveur (11th-13th centuries). 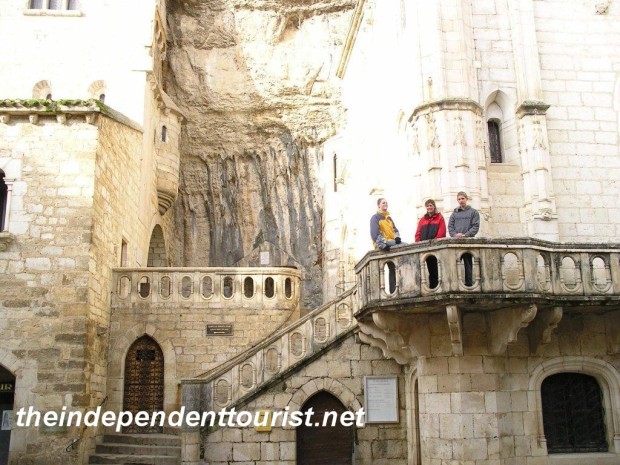 The seven chapels are built around the church square (which used to be a burial site), nestled underneath the rock cliff, at the top of the Grand Stairway. The Grand Stairway (Grand Escalier-216 steps), leads from the pedestrian street up to the center of the various chapels, including the Basilica.  Pilgrims for hundreds of years, and even today, climb the Grand Stairway on their knees in penance, sometimes carrying chains symbolizing their sins. Several of the chapels have been rebuilt.  It is worth spending a little time just enjoying the church square at the top of the Stairway. The medieval chapels on different levels in this compact area and the rock overhang give this place a very unique feeling, one is transported back in time, thinking about this area being filled with pilgrims.

The three chapels which are mostly original and the most interesting to visit are:  The Basilica (including the crypt), The Notre Dame chapel, and St. Michel’s chapel. All three of these buildings are built right into the cliff, with the sides of the chapels being cemented into the cliff, and the rock face forming the back wall and part of the ceiling in each chapel.  The niche where St. Amadour’s body was found is between the Notre Dame and St. Michel’s chapels.  Also, look carefully for the faded fresco near the door of the Notre Dame chapel.

St. Michel’s Chapel, has remained almost completely intact since the 12th century.  It contains some excellent 12th century frescoes on the outside above the door (near the rock cliff) and inside the chapel as well. When we visited in November of 2003, this chapel was closed. When we visited in March of 2009, the chapel was open.   Rather than walking back down the Grand Stairway, take the narrow passage way through the Basilica and walk down the trail past the carved out rooms with the Stations of the Cross, which is interesting also.

Above the village at the top of the cliff, is Château de Rocamadour.  The interior is off limits to tourists, but we did buy tickets that allowed us to walk on its ramparts right above the village overlooking the gorge.

On our first visit to Rocamadour, we stayed in the village of Gramat, just a few kilometers from away, since in November there were no accommodations open in the town.