St. Michael the Archangel in Christianity is the patron saint of high places. There are at least three major places in Europe that are holy sites associated with St. Michael: Mont St. Michel in Normandy, France; Skellig Michael off the southwest coast of Ireland; and St. Michael’s Mount near Penzance (Cornwall) England. Interestingly, all are islands, even though Mont St. Michel and St. Michael’s Mount were at one time part of the mainland. They are all monasteries and have an isolated feel about them, even with the visitors.

I have visited Mont St. Michel in France, and viewed Skellig Michael from a distance, longingly wishing I could visit (it was too early in the year and the sea was too rough). 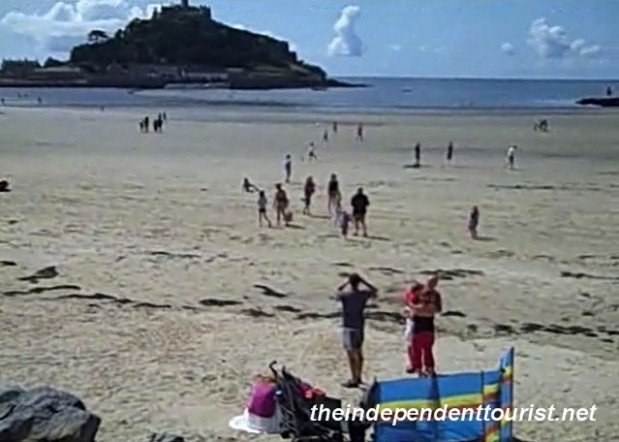 The beach at Marizion – St. Michael’s Mount in distance.

St. Michael’s Mount in England is impressive too and is located in a beautiful bay near the town of Penzance, which has a nice sandy beach—one of the warmest spots on the English coast—and the first place spring arrives in England.

We visited in August, the weather was in the 70’s F and the beach was pretty busy with English folks on holiday. Penzance is steeped in history- including raids of Barbary pirates and so is St. Michael’s Mount. It was a Benedictine monastery and founded in the 11th century. It had a close connection in medieval times with Mont St. Michel in France, as a subordinate sister monastery. The mount has been privately owned by the St. Aubyn family since the 1600’s but visitors have access through the UK National Trust, which manages many historical sites throughout the country (buy an annual pass if you are visiting several historical sites). 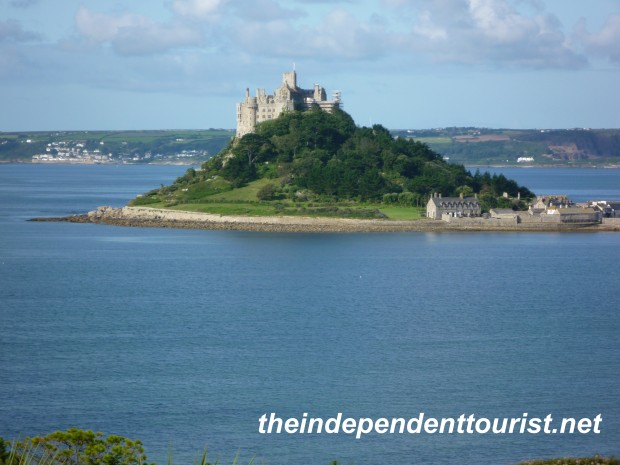 With the tide in, a boat is needed to reach St. Michael’s Mount.

The Church at St. Michael’s Mount.

Depending on the time of visit, one can either walk out to the Mount, or take a boat (which does not operate in winter). We did both. The tide was in when we left in the morning (see picture above) and so we took a boat ride out to the harbor on the island. By the time we were ready to leave, the tide had gone out and we were able to walk back on the cobblestone path along the seabed (picture below). There is plenty of parking in Marazion, the small town opposite the Mount.

The pathway to St. Micahel’s Mount with the tide out. 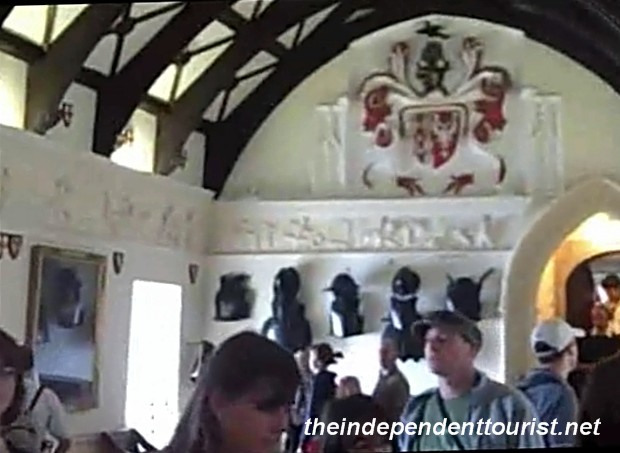 Another castle room – with the look of Wedgewood.

Once on the island, the ticket office is next to the harbor. There are several different tickets available: Castle only, Garden only and Castle and Garden. We chose the Castle only, but had a nice view of the Garden from the south side of the Castle walls. After purchasing our tickets we made the hike up the hill to the site. St. Michael’s Mount is about 250 feet in elevation and it’s a steep stone path to the top. Pictures of the interior are tightly controlled, but I was able to get a few. The main sights are the Castle and Chapel, in addition to the Gardens. Morning is a great time to visit for pictures of the island and the surrounding countryside. There is a gift shop and restaurant on the Mount near the harbor.