In the hills above and north of the city of Cuzco are several great Inca ruins. Saqsayhuamán, Tambomachay, Puka Pukara and Q’enqo are all quite near each other, and just off the road on the way to Pisac. Allow a half-day to visit these sites. A tourist ticket to visit these ruins and a museum in Cuzco, plus a number of sites in the Sacred Valley costs 130 NS (about $46, for non-locals). The ticket can be purchased in Cuzco or at your first stop. Unfortunately it’s “all or nothing,” you cannot purchase individual site tickets. 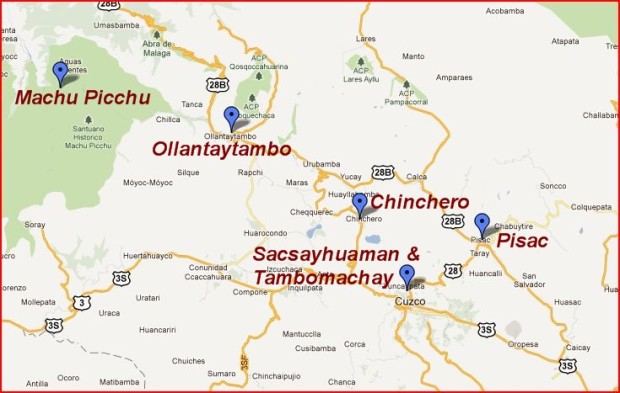 The tour agencies around the main plaza (Plaza de Armas) in Cuzco charge 25 NS for a “city” tour which includes the four sites above, and one site in Cuzco [the Temple of the Sun (called Qorikancha) in the Santo Domingo Church]. Please note that Qorikancha costs an extra 10 NS. For some reason, all the tours seem to be in the afternoon, and by the time we got to the last site it was getting dark (and raining). If I had it to do over again, I would recommend just hiring a taxi for the day to go to the local sites near Cuzco, which would allow you to proceed at your own pace, and visit during the less crowded time of day.

This church (Santo Domingo) is built on the Inca Temple of the Sun, and parts of the original structure remain inside

The most impressive site is Sacsayhuamán, which must have been incredible before much of it was destroyed by the Spaniards. Even still, huge, perfectly cut stone walls remain. There are also excellent views of Cuzco from Sacsayhuamán. The construction on this site began in the 1440’s, and it’s believed 20,000 workers were required to cut and assemble the massive stone work.

A view of the walls of Sacsayhuaman (Cuzco in the distance)

The massive cut stones of Sacsayhuaman

We also visited Tambomachay, which is further along on the same road north of Cuzco. According to our guide, there are 320 Inca sites around Cuzco, 90 of which are water-related, and Tambomachay is the most important. It contains precise stone work over a natural spring, and may have been used for rituals involving water. 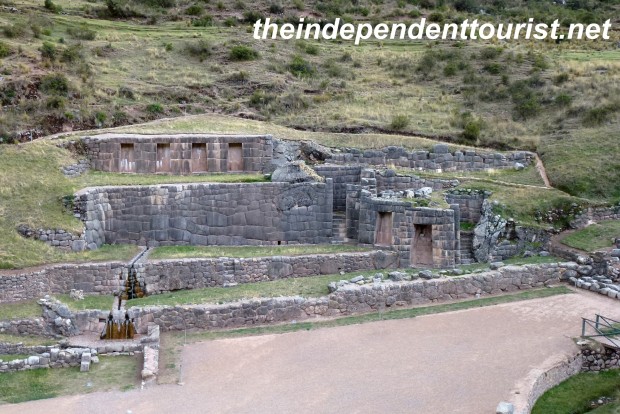 The Inca site of Tambomachay 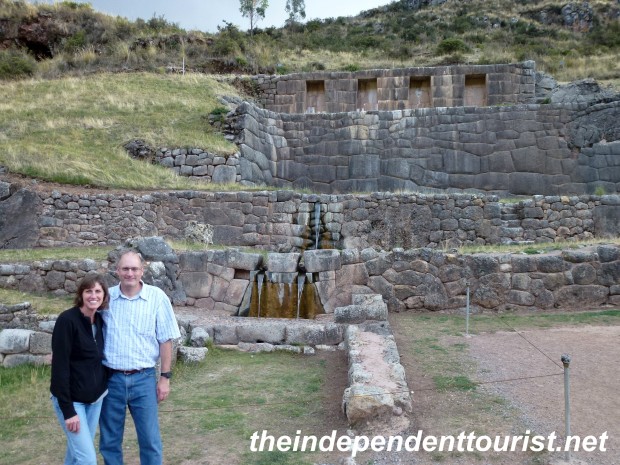 A view of the fountains at Tambomachay

There are two other sites along this same road, Puka Pukara and Q’enqo, which are part of the tourist ticket. Right before it started raining hard, I got a picture of Puka Pukara in the last few seconds of sun.  Very little is known about this ruin, it is likely that it was a fort protecting the entrance to the Sacred Valley sites. We drove past Q’enqo since it was getting dark and pouring rain (after a beautiful day), but this is a site with zig-zag channels, which were believed to be for llama blood and depending on the flow of the blood, a prediction on the quality of the harvest would be made.

The fort of Puka Pukara

On the way back to the main plaza in Cuzco, our tour bus took us to some tourist shops, with a large variety of goods (near Q’enqo).  We found lots of alpaca sweaters, hats, gloves, and many other clothing items, as well as various trinkets. These shops were some of the better ones we saw on our trip. If you want high quality items, visit the store Arte Peru Joyerias, just to the west of the Plaza de Armas. This is where we bought our authentic baby alpaca sweaters.