After arriving in Dublin the prior evening and staying in a B&B close to the airport, we drove north to  Newgrange (about 55 km, near the town of Drogheda) and then southwest to the town of Trim, home of Trim Castle (another 45 km).  Finally, we drove all the way down to Limerick (about 233 km), visiting nearby Bunratty Castle in the late afternoon, and then spent the night in the Limerick area. 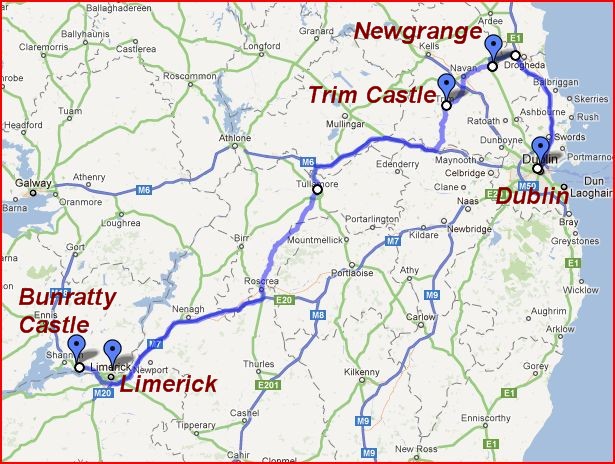 Newgrange. This unique burial ground dates from 3200 BC and much of it is intact, having escaped invaders over the centuries until it was discovered in 1699. Excavations took place in the 1960’s. This burial site is 500 years older than the pyramids of Giza, Egypt. It’s hard to get good pictures here, since access is tightly controlled and no pictures are allowed inside. The site consists of an entrance into the mound and a 62 foot long passageway to a small circular burial chamber, with a corbelled stone roof that has kept the chamber dry for 5,000 years. There is a small opening over the entrance door that is aligned such that on Dec. 21st (winter solstice) natural sunlight illuminates the long passageway and all the way into the chamber for 17 minutes—the world’s oldest solar observatory.  Many of the interior stones lining the passageway are decorated with geometric and circular patterns. Since we visited in March, we had no problem gaining access to the tomb (the only way to visit is with a tour guide from the Visitor’s Center), but I understand during the summer the lines can be long, so plan accordingly. There is a shuttle bus from the Visitor’s Center up to the site.  Newgrange is part of the Heritage Ireland system.

The Newgrange burial mound, entrance is on the right side. 3200 BC.

The entrance to Newgrange burial tomb. Note the small opening above the doorway where the sunlight of the winter solstice lights the passageway and tomb. Also, the horizontal stone in front is decorated with ancient geometric designs

Trim Castle.  One of my favorite historical movies is Braveheart, about William Wallace (played by Mel Gibson), the Scottish patriot who fought for Scottish independence against King Edward I in the 1200’s. The castle was used in the movie as a setting for York, England. It was built in the 12thcentury and is the largest Norman castle in Ireland, meant to keep the Irish at bay after the Norman conquest of the British Isles. The tower keep is 70 feet high and has 20 sides, which provided defensive views in every direction.  The castle is set next to the River Boyne, and across the river part of the original town wall also remains. The only way to visit the inside of the Keep is by guided tour, which is twice per hour.  Having been in many castle keeps, we did not take this tour, and just wandered around the castle grounds. Trim Castle is also part of the Heritage Ireland system.

A view of Trim Castle from across the River Boyne 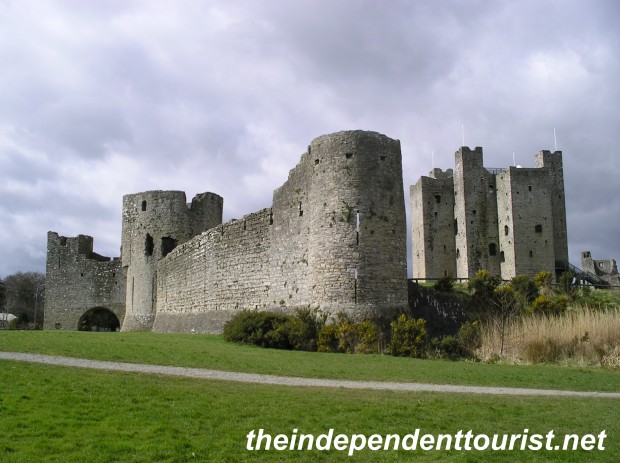 Bunratty Castle.  Rick Steves (travel book author) says to bypass this castle and adjacent Folk Park. Although this site is a bit touristy, I think it’s worth the visit. The castle was built in the 1400’s and the interior has been restored to the era of the early 1600’s. It’s privately owned (not part of Heritage Ireland). We did tour the interior, which has some unusual chandeliers. Medieval dinners and show are held in the castle, which we debated attending that evening.  However, the cost at the time was about $100/person, and $300 for the 3 of us seemed a bit steep, so we passed up the opportunity. There is also a Folk Park next door to the castle, showing rural life in Ireland at the end of the 19thcentury. You can wander into the shops and houses to get a feel for life during that era.