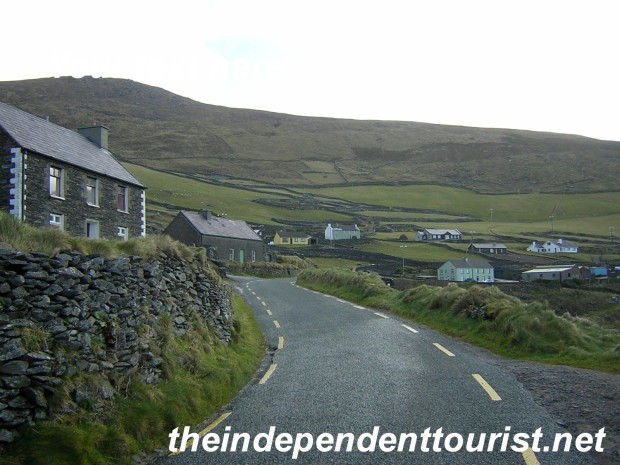 The narrow road that winds around Dingle Peninsula. 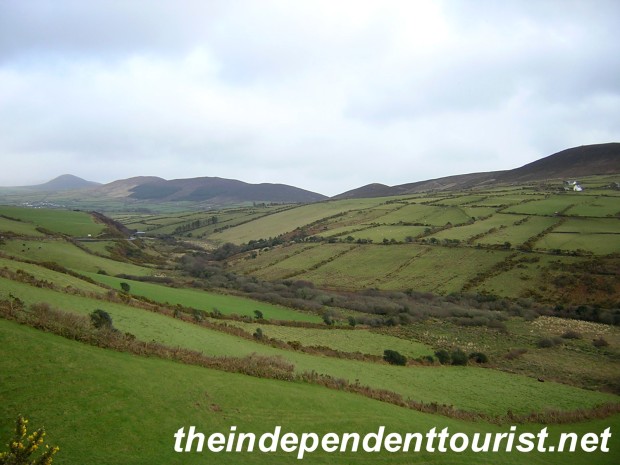 The farming country of Dingle Peninsula. There are more sheep than people in this remote part of Ireland!

From the town of Dingle, we drove around the peninsula counter-clockwise.  We had most of the road and stopping points to ourselves (we were there in late March), and enjoyed the great views of the rugged coast and the now uninhabited Blasket Islands (the village on the main island is now a ghost town). The government thought it best to move the last of the residents from the Blaskets to the ‘mainland’ in 1953. There are also some interesting historical sites in this remote and windswept part of the Emerald Isle, which provides a feel for the Ireland of yesteryear.  A drive around the end of the peninsula with stops will take about 3 hours, although it is only about 30 miles. This part of Ireland is Gaelic-speaking (yes, English is spoken too). 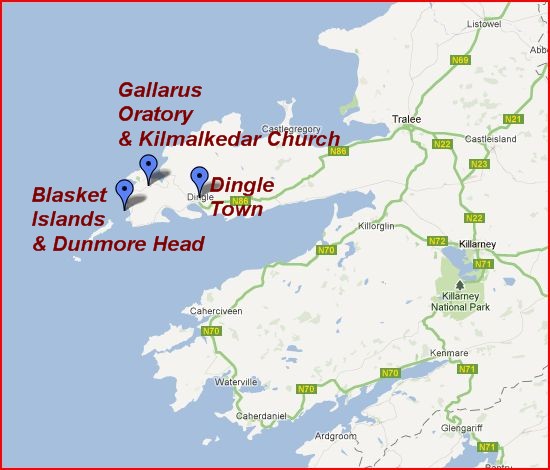 The Ring of Kerry to the south is more famous and well-traveled, but the scenery on the Dingle Peninsula is beautiful and a bit less touristy.

Here is a pictorial tour, driving west from the town of Dingle… 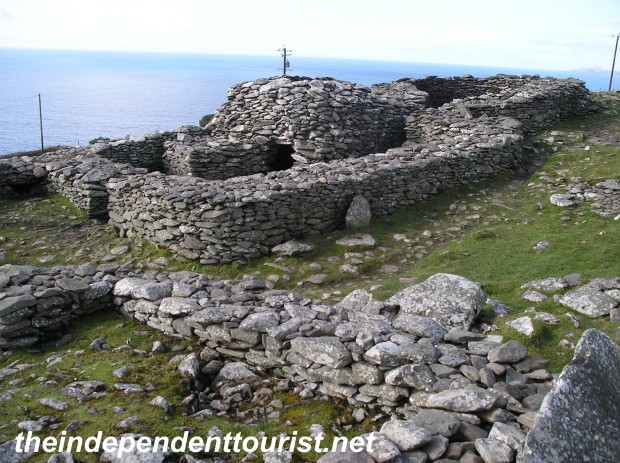 The "Beehive Huts" on Dingle Peninsula - thought to be early Christian huts built for pilgrims visiting the area.

The beautiful coastline, with the green manicured hills and very blue waters of the Atlantic: 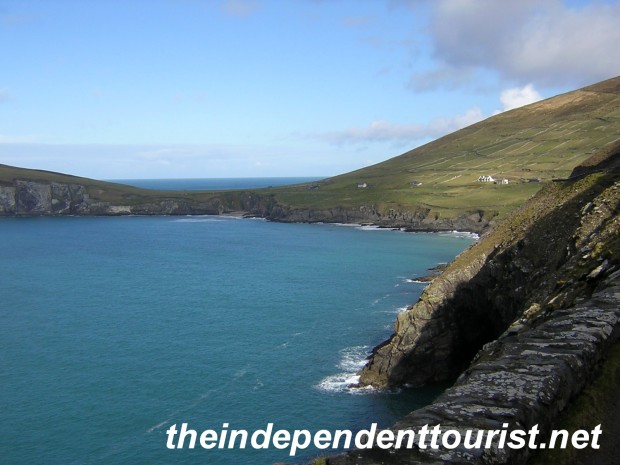 Coming up to Dunmore Head, the westernmost point in Europe. 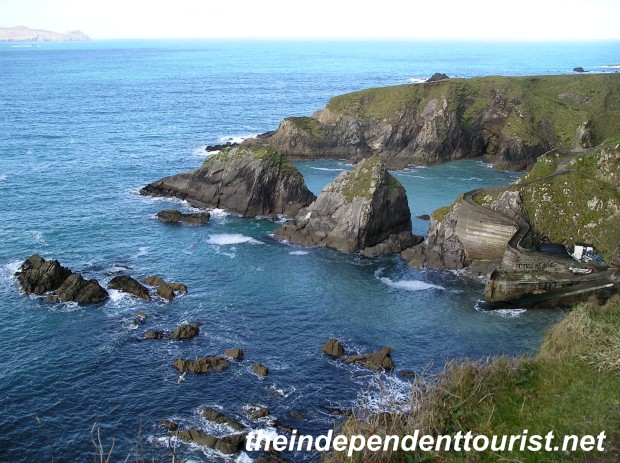 Dunquin Harbor, on the Dingle Peninsula coastline. In the right side of the picture there is a ramp for a ferry that goes out to the Blasket Islands. Farmers from the Blasket Islands would dock here (until residents were moved off the islands in 1953), and hike 12 miles to the town of Dingle to sell their produce. This area (but not the Blasket Islands) was affected by the potato famine of 1845.

Some interesting historical sites include the ancient churches: 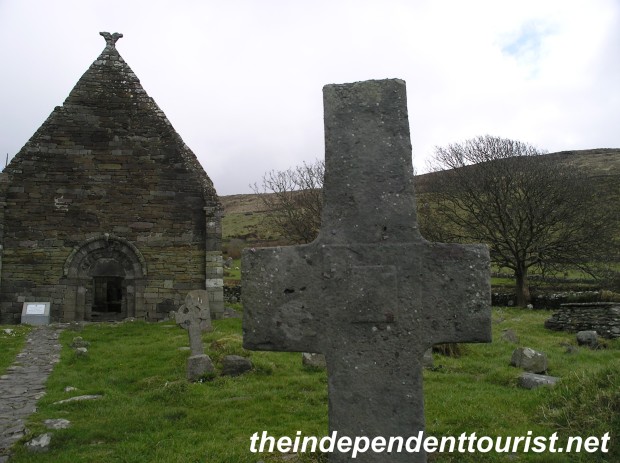 The Church of Kilmalkedar, a 12th century Irish Romanesque church, with a very old cemetery that pre-dates this church.

The vertical stone (below) that Robyn and I are touching is called an ogham stone (900 years older than the Church of Kilmalkedar), and has a script carved onto it that was used in the 3rd to 7th centuries. The stone marked a pre-Christian grave, and a hole in the top of the stone (where Robyn and I are touching thumbs) was a place where people would come to covenant with one another, standing on the graves of their ancestors. 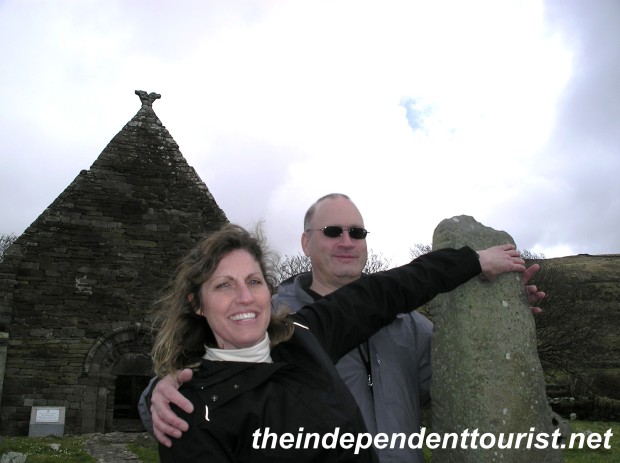 The Gallarus Oratory, which is 1,300 years old, is a marvel of watertight stone construction. The stonework is dry-stacked (no mortar). 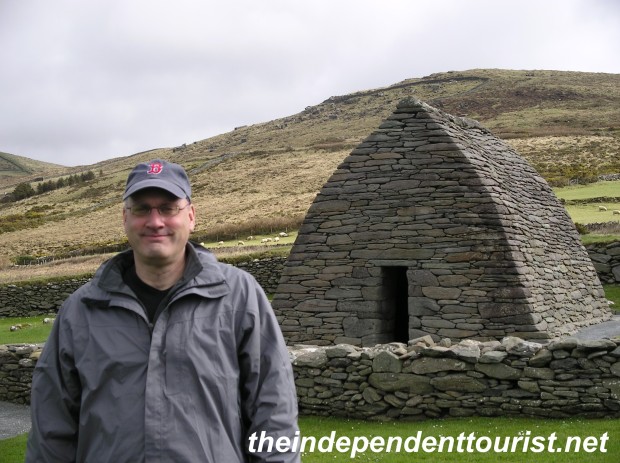 The Gallarus Oratory, built about 700 AD.