From Kinsale we drove to Waterford. Waterford is the oldest town in Ireland, located on the River Suir, near the southern coast. Our main reason for visiting Waterford was to go to the world famous crystal factory located on the edge of the town. The factory provides a one-hour tour of the crystal-making process and has a large store. Of course we had to buy something; Robyn bought a crystal nativity set. We also visited Reginald’s Tower, the oldest surviving civic urban building in Ireland.  Reginald’s Tower was part of the old town’s defenses, built in the late 1100’s. It was used as a mint, prison and military store, and now houses an exhibition on the history of the area. For map of sites visited in Ireland, click here.

Reginald's Tower in Waterford. Dates from the 1100's.

From Waterford, we drove northwest 80 kilometers to the medieval site of the Rock of Cashel, standing over the town of Cashel. It was extremely windy and rainy that day (in mid-March), with the rain coming at us horizontally on the Rock, but we enjoyed our visit nonetheless.  The Rock contains a collection of buildings from the 12th, 13th and 15th centuries.  It was the seat of the Kings of Munster who ruled much of southern Ireland from the 5th century to the 12thcentury. St. Patrick baptized King Aengus here in 450 AD.

Cormac's Chapel from the south side. The first Romanesque church in Ireland, consecrated in 1134. There are a few faint frescoes inside.

The site was turned over to the Catholic Church in the 1100’s as a strategic move to favor the Church and keep the site out of the hands of rival clans. The buildings and ruins include a Romanesque chapel (Cormac’s Chapel), a Gothic cathedral, archbishop’s house (or castle), round tower (the oldest stone structure on the site, 92 ft high), graveyard and other stone monuments. The dormitory building (Hall of the Vicar’s Choral) contains a restored medieval wood roof, visitor’s center and museum.  If you like medieval history and buildings, this is one of the greatest sites in Europe. 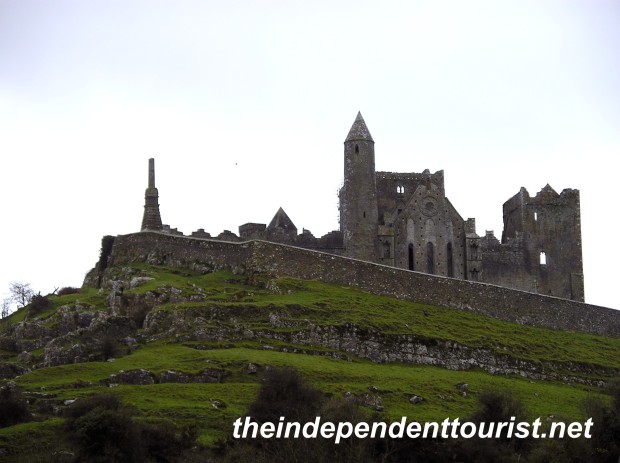 The imposing Rock of Cashel as viewed from the north.

A view of the graveyard and round tower on Rock of Cashel. 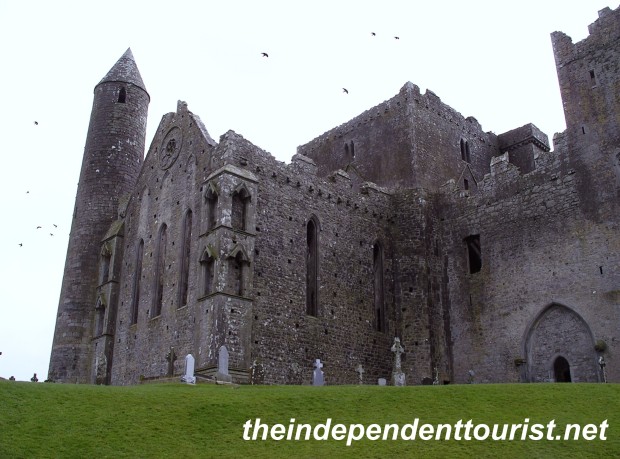 A view of the round tower and north transept of the cathedral on Rock of Cashel.

From Cashel, we drove to Cahir, to visit Cahir Castle, located 17 kilometers south of Cashel. Cahir is one of Ireland’s largest and best preserved castles, and yet seems to be somewhat unknown to tourists. It is located on a rock island in the River Suir, in the heart of the town of Cahir.  It was built in the 13th century, and expanded in the 15th and 16thcenturies. It was granted to the Butler family by the English crown in 1375, and stayed in the ownership of the family until 1964. There are lots of rooms to explore in this castle.

Cahir Castle on the River Suir. 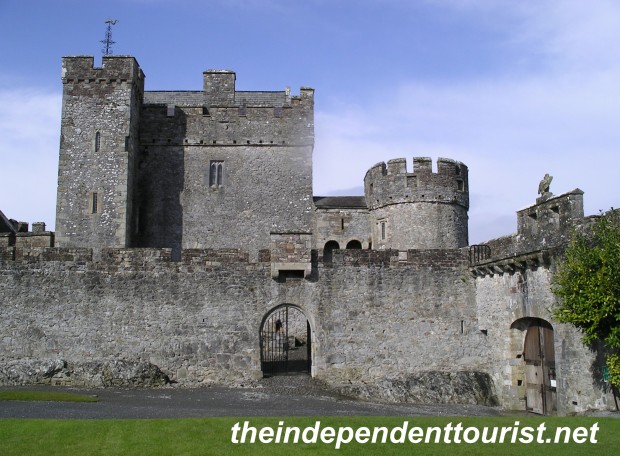 Reginald’s Tower, the Rock of Cashel and Cahir Castle are all part of the Heritage Ireland system.