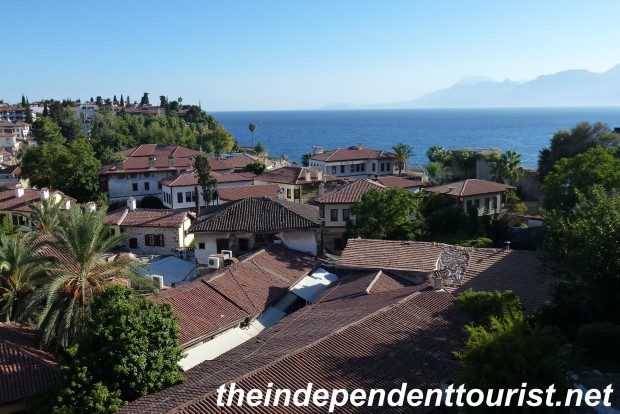 A view of the old town of Antalya with the blue Mediterranean and mountains in the distance.

From Cappadocia we flew to Antalya (via Istanbul). Antalya is on the southwestern coast of Turkey, and has a beautiful setting, centered on a small scenic harbor with pebbly beaches and mountains nearby. It would be easy to spend a week here, by making Antalya your base for exploring this part of Turkey. We spent two nights at the Atelya Hotel in the heart of the old city (parking is tight in the old town, but the hotel had a smal enclosed parking area). For a map of our locations visited in Turkey please click here. 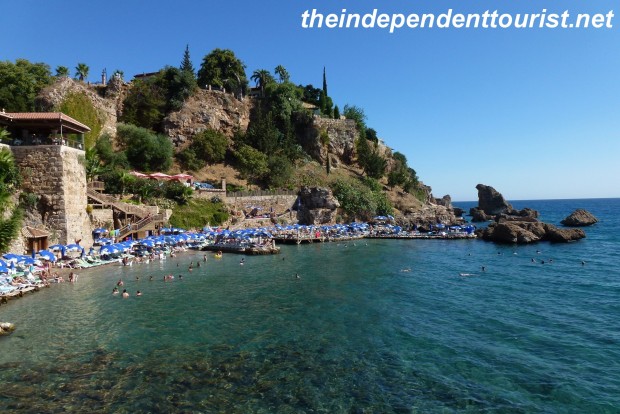 The beautiful coastline of Antalya. We ate at an excellent restaurant overlooking this beach.

Anciently, there were six major cities that made up the Lycian League. The Lycian Way is a pathway that more or less follows the coast from Antalya west to Fethiye, connecting these ancient cities and wandering through the forests and along the coast. We were lazy and made this trip by car.

The interior courtyard of the Atelya Hotel, in the old part of Antalya.

Antalya was founded in 159 BC and prospered in the Roman, Byzantine and Ottoman periods. There are remnants from these historical eras scattered around the town including walls, towers, mosques, minarets and gates still standing.

The 13th century Fluted Minaret – a major landmark of Antalya.This minaret was once covered in turquoise tiles. 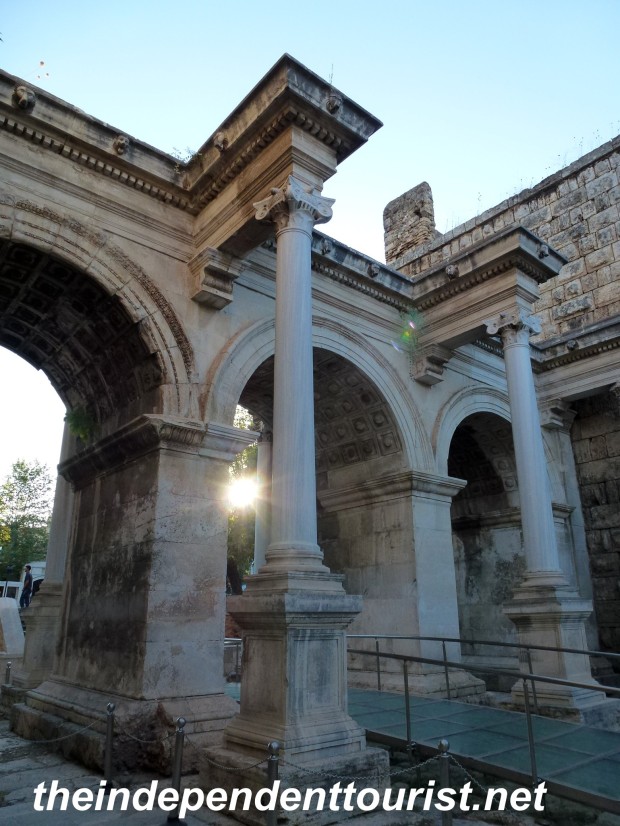 Hadrian’s Gate – built to honor the visit of the Roman Emperor Hadrian in 130 AD. Located at the eastern edge of the old city. 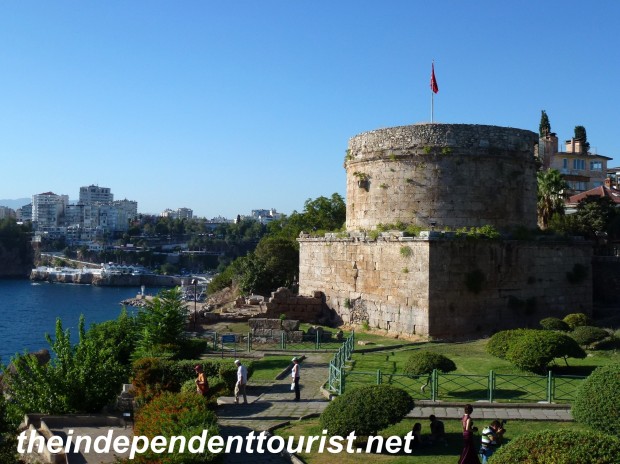 The Hidirlik Tower in Karaalioglu Park, a Roman lighthouse.

Take time to explore Karaalioglu Park, set on a cliff overlooking the Mediterranean just to the east of the old town.  This side of town is quieter than the western side and has some good restaurants and interesting streets to wander. Antalya is a pretty big city (with a very nice modern airport), but once you’re in the historic area it feels more like a quaint town.

Near Karaalioglu Park. In September, it felt like Spring in Antalya.

A house in Antalya’s old town – in need of some siding repair!

Nearby are beaches, waterfalls, and many historical sights. Inland (about 35 km) up in the mountains is the massive ancient Pisidian city of Termessos (which we’ll cover in another post). From Antalya you can work your way westward along the coast (the Lycian Way mentioned above)—with numerous ancient ruins and stunning natural scenery, and of course eastward to the grand restored Roman theater of Aspendos and the city of Side. I would seriously consider returning to Antalya and exploring more of this beautiful part of Turkey.