The town center of Oradour-sur-Glane.

A news article this past week caught my attention about the little town of Oradour sur Glane in south central France, near the city of Limoges. For most of us, the name of this town would not hold any meaning and yet it’s the sight of one of the greatest tragedies in WW II, the brutal murder of 642 men, women and children. 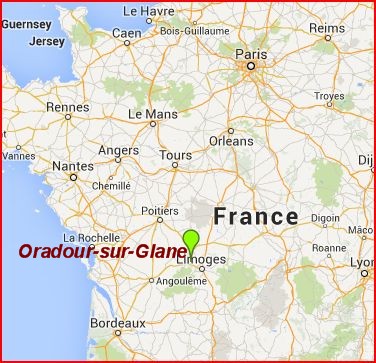 My wife and I, my brother and parents-in-law had the privilege of visiting this village memorial a few years ago.

My brother on a main street of Oradour-sur-Glane.

Here’s a short version of what happened:

On 10 June 1944, four days after the Allied invasion of Normandy, approximately 150 Waffen-SS soldiers entered the tranquil village of Oradour-sur-Glane. Under the pretense of an identity check and then a search for weapons, the soldiers divided the inhabitants, the women and children were marched over to the church and the men were divided into six groups and led to different barns in the town. 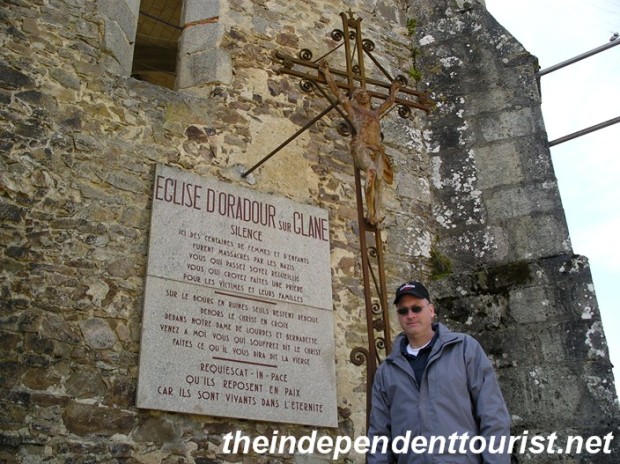 A plaque on the church in memory of the women and children who died here.

A view of the church where the women and children were shot and burned.

The men’s fate in the barns was similar, they were shot in the barns and badly wounded, but while some were yet alive the soldiers piled wood and straw on the bodies and set the barns on fire.  One woman and 5 men somehow escaped.

A plaque on one of the buildings where men were shot and burned.

After killing all the townspeople that they could find, the soldiers set the whole town on fire and early the next day, taking stolen goods from the houses, they left. Many of the soldiers then worked their way up to Normandy where a number of them were killed fighting the Allies in the early days of the Normandy invasion.

On the orders of General Charles de Gaulle, the town was not rebuilt and the whole village now stands as a memorial to this terrible tragedy. 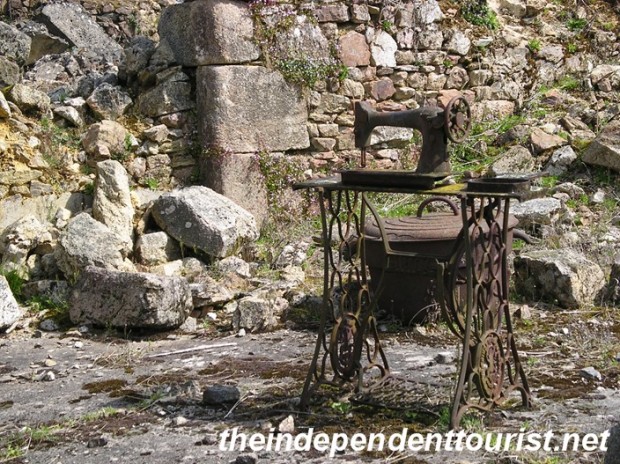 Remains of autos in a garage.

Remnants of another home with what looks like an oven and bed (lower right corner). 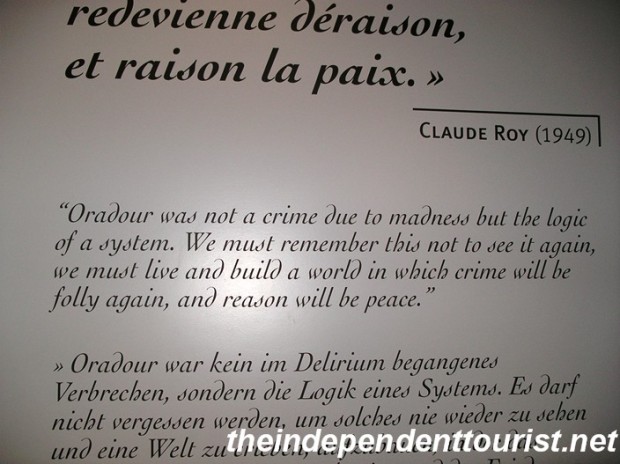 A powerful quote by Claude Roy (1949) in the Visitor’s Center.

You park at a visitors center and a walking tunnel takes you under the road and over to the village where plaques mark the spots and in most cases denote the numbers of those who died that terrible day.  This ghost town, left untouched for almost 70 years, greets every visitor who enters with only one English word:  Remember.