Outside Meknes, Morocco are two historical sites that make for a good day trip adventure. They are about 25 km (15 miles) from Meknes.

Volubilis was one of the Roman Empire’s most remote outposts. The city exported wheat and olives to Rome along with wild animals from the Atlas Mountains that were then slaughtered in the Coliseum games and gladiatorial contests. Within 200 years, the local lions, bears and elephants became extinct.

The Tangier Gate – the east entrance into Volubilis.

Roman influence in Volubilis began a long slow decline starting in 285 AD with the withdrawal of the Roman garrison. They wanted to conquer the local Berber population but never succeeded.

The Forum and Basilica at Volubilis.

The city was still thriving in the 17th century, when much of the city’s marble was carted away by Moulay Ismail for the building of his gigantic palaces in Meknes.

The Triumphal Arch, erected to honor the emperor Caracalla. It once had a bronze chariot at the top.

The House of Columns. 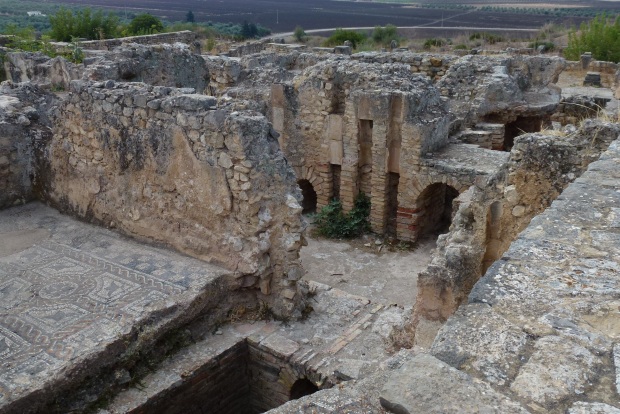 Another view of the ruins and mosaic floors at Volubilis.

One of the main highlights of Volubilis are the outstanding mosaics floors, of which there are about 30 and many of which are largely intact 1,700 years later (although the colors are fading due to exposure to the elements).

A mosaic floor of “Dionysos and the Four Seasons”.

Another mosaic floor – “The Labors of Hercules.”

Allow a couple hours to wander the ruins, which run along the main promenade. Bring your own guidebook for information about the mosaics and other ruins.

Tucked up in the hills just 4 km from Volubilis, Moulay Idriss is a very holy and important pilgrimage site to the Islamic faith, which was named after its founder. The focus of the pilgrimage is Moulay Idriss’ mausoleum. He was Morocco’s most acclaimed saint (a great-grandson of the Prophet Mohammed) and the creator of Morocco’s first Arab dynasty.

The main square of Moulay Idriss.

The only round minaret in Morocco is in Moulay Idriss, it is part of the Merdersa Idriss, a Koranic school. Built in 1939 from materials taken at Volubilis.

While there are no specific sights for non-Muslims to visit, it was fun to wander around. A friendly local man gave us a tour of the town, taking us up through the steep narrow lanes (the locals musts be in good shape since they have to haul their supplies either using mules or their own backs).

Mules are the means of transportation in this hill top town. 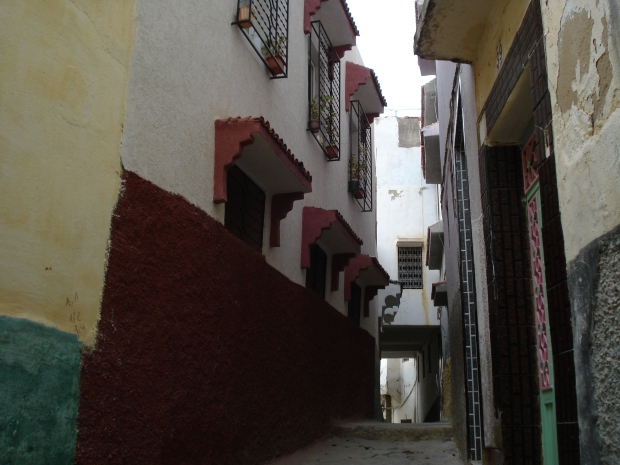 One of the many narrow lanes in the town.

Our impromptu guide showed us a number of viewpoints (the town’s location and surrounding area are quite scenic). Moulay Idriss reminded us a bit of the medieval villages you might find in Italy or other European towns.

Reference: The Rough Guide to Morocco