There aren’t a lot of words that can really describe the feeling of being at the world renown Angkor temple complex near Siem Reap. For me, being at Angkor Wat (featured image above) and the surrounding temples was the equivalent of seeing the pyramids of Egypt for the first time—I guess “awestruck” would be the best word I can come up with.

The entrance to Ta Som temple, one of the most picturesque in Angkor.

These temples and the surrounding landscape are stunning in every sense of the word, the jungle growth surrounding (and covering) them just adds to their allure. In addition to the temples, there are reservoirs, canals and other interesting features of what was an incredible capital city. Angkor was the capital of the Khmer Empire (which covered parts of modern Cambodia, Thailand, Laos and Vietnam) for about 500 years, from the 9th century to the 12th century. Considering how magnificent the ruins are today, one can only imagine how palatial the city must have been almost a thousand years ago.

We arrived in Siem Reap in late afternoon after a 7-hour bus ride from Phnom Penh. The bus dropped us off at a central point and then the bus company provided taxis to take us to our various hotels. Siem Reap was larger than I expected, for some reason I was thinking it might be a fairly small town on the outskirts of the Angkor temple complex for which it is known. There is a fairly small central core old town where most of the tourists and related services are located.

One of our meals in Siem Reap – with crocodile and other meats and fish (crocodile tasted like a fishy pork). 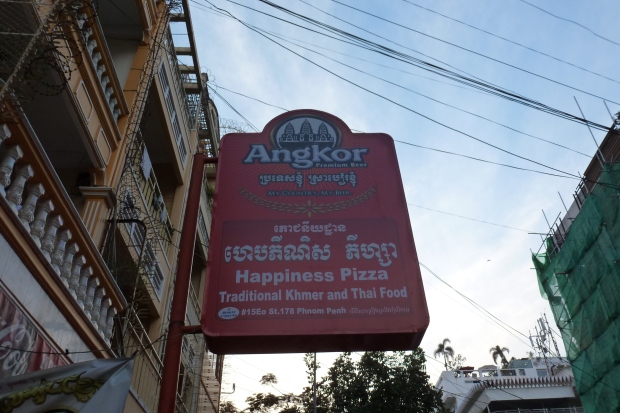 You can get yourself a “happiness pizza” in some towns in Cambodia – a pizza that has a little marijuana in it!

Speaking of tourists, Siem Reap is definitely a major tourist hub with a modern small airport, and the town seemed overrun (at night) with tourists compared with Phnom Penh. We visited during the height of tourist season, since the weather is at its best in January.

One of the main streets (Pub Street) at night in Siem Reap.

Even with all the tourists, we were able to see everything we had planned on during our 2 ½ days. It would be easy to spend a week here, since there are numerous temple ruins all over the region, not just in Siem Reap. My son and I visited one distant temple ruin (Beng Melea) which was about 60 km from Siem Reap on our 3rd day (we hired a taxi), while my wife and daughter visited a local museum and did some shopping.

The ruins of Beng Melea temple – fewer visitors here and we were able to wander around uninhibited.

Admittedly, some people might get “temple fatigue” after a day or two, but that wasn’t a problem for us!

The ticket entrance to the Angkor temple complex is about 4 km (2.5 miles) north of the city, and the temples are located another couple kilometers beyond the entrance. 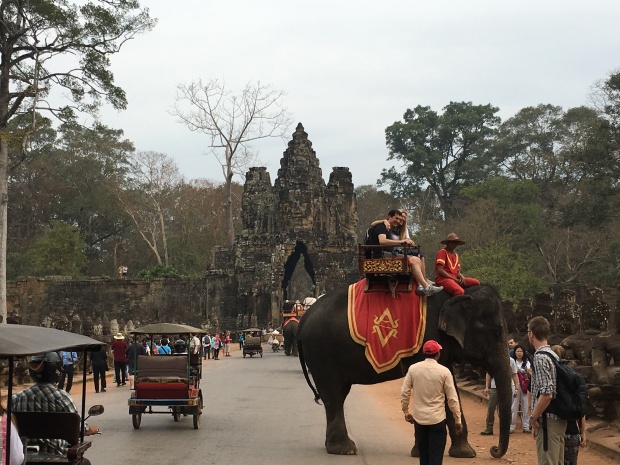 The busy South Gate entrance into the Angkor Thom Temple complex, which is 1.5km north of Angkor Wat (the signature temple of Angkor Archeological Park, and the featured image of this post).

There are numerous transportation options, including joining a tour, getting a taxi, renting bicycles, mopeds, or doing as we did and hiring a tuk tuk that had room for 4 people. Since the terrain in this part of Cambodia is very flat, getting around on a bicycle or moped would not be difficult; however, the distances from the town to the temples and from temple to temple are significant enough that I would rather enjoy time at the sites.

Our tuk tuk (in our case a motorcycle pulling a cart) was $20 for the whole day.

Our tuk tuk. The driver put up a hammock to rest while we toured.

We just pointed out on the map the temples we wanted to visit that day and our driver took us on a route to cover those temples. This was a great way to go, we could visit the temples on our own terms rather than having to be with a larger tour.

Our hotel was within walking distance of the old part of the city where many restaurants, shopping bazaars and nightlife keep tourists occupied in the evenings. There is even a Hard Rock Café in town. Lots of variety of food is available, and many small tourist agencies which can arrange transportation or day trips to nearby locations also. Hotel accommodations vary from grand, large hotels to small boutiques.

The Angkor temple complex is huge, and we spent two days exploring it. We typically started at 8 am. The temples are open very early, but we found late afternoon also worked well for avoiding the peak crowds that come in around 10 am and leave around 2 pm. If you have just one day you can realistically visit 6 or 7 temples, and get a pretty good feel, but you probably won’t get to experience the quieter temples that are further off the beaten path (we visited 17 temples in 2 ½ days!). A pass for the Angkor temple complex is $40 USD for 3 days in a 7-day period, and most temples will require you to show your pass, so don’t lose it! There are lots of small vendors around the main temples to buy water and snacks.

In my next couple of posts, I will share more about the temples we visited each day.