If Guatemala is known for one tourist site, it would have to be the stunning Mesoamerican archeological site of Tikal. Tikal was “discovered” in 1848 and opened to tourism in 1955. Located in the northern part of Guatemala, near the Belize border, Tikal is just one of a number of archeological sites in the region, and if you can, I highly recommend allowing enough time to see at least one other site in addition to Tikal. In our case, that was Yaxha, which is gaining popularity with the tourist.

I hope to clarify a few things about a visit to Tikal below, which is a Guatemalan National Park. Prior to our visit, I found detailed information online lacking.  I will share more images of the entire site of Tikal in my next post.

There are many ways to visit Tikal: 1) as a day trip from Guatemala City by air, 2) a day trip driving over from the country of Belize, or 3) using one of the towns near Tikal as a home base (such as Flores) after arriving by air, bus, or auto; or 4) staying near the Park itself. The problem with the first two options is that your time at Tikal is limited significantly by all the same-day travel, and you’ll be there at the peak time of the day with the tourist crowds. The problem with the fourth option is that you are severely limited in terms of restaurants, transportation, etc., since the Park is remote. The most popular option is #3, staying in Flores, and this is what I recommend. You’ll get a full day at the Tikal and you can visit other sites if desired before or after Tikal.

How Long Should We Plan for a Visit to Tikal?

This depends a bit on how much you want to see. We arrived at 7 am (about one hour after the official opening time), and kept moving all day long. Walking at a pretty good pace, we saw all the major temples, plazas and other complexes, had time for numerous photo opportunities, climbed multiple pyramids, stopped a couple times for cold drinks and snacks, waited out a short rainstorm, and made it back by around 2:30 pm to the designated pick up spot, so that was about 7.5 hours total. The overall site is huge, and it’s about a 20 minute walk from the pedestrian ticket entrance to Tikal’s Gran Plaza (“ground zero” for photo ops and tour groups). The Park is open 6 am to 6 pm, 365 days per year. For an additional separate fee, and with a guide, you can get into the Park as early as 4 am and leave as late as 7:30 pm for sunrises and sunsets, but in my opinion, these times and fees would not be worth it, most days it’s hazy or misty early in the morning in the jungle (see below).

Tikal’s Gran Plaza in the early morning mist. There were just a handful of tourists at this time – about 7:30 am. (We came back later to take more pictures with bright blue skies).

For me, the 7.5 hour visit was about perfect. There were still a few structures we did not explore, but we saw the vast majority and far more than those on a day trip from Guatemala City or Belize would see.

Other points about the Park: a) It is well sign-posted with large maps and several covered break areas and restrooms. 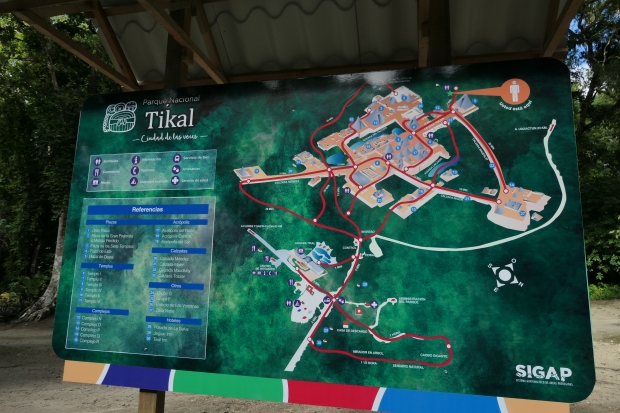 Example of the maps in the Park, found at the rest areas. The maps show approximate time from point A to point B for each trail. The map also shows “usted está aquí” (“you are here”)!

One of the break/restroom areas at Tikal.

There are signposts everywhere, so it would be hard to get lost, the main issue is determining your route based on how much time you have, and planning to get back to the main entrance in time for your return transportation. b) The distances on most maps look deceptive, it takes a bit longer to walk from temple group to temple group than you might think. The trails are a bit slippery due to the constant moisture/humidity.

This is one of the better trails in the the park, others are a bit rougher and narrower.

It helps to be in moderate physical condition, since you will be on your feet all day walking the trails, climbing up the pyramid staircases and dealing with the weather – even in winter (when we were there), it is still somewhat humid and warm, and we had a rain shower. The site is not wheelchair friendly, the only way to get around is on foot.

You can take a small backpack into the Park with water, snacks, umbrella, etc. There are a few places to buy drinks and light snacks inside the Park also. Official Park regulations can be found here.

We arranged transportation at our hotel in Flores, about 24 hours in advance. It appeared that our bus (which was a regular-sized tourist bus) was collecting groups from multiple small hotels all over Flores and it also stopped once or twice along the way to pick up tourists or guides from other small towns. We had to be ready to go at 4 am and the bus departed Flores around 4:30 am.

On the drive to Tikal, the bus stopped at the main National Park vehicle entrance at 6 am where you buy your Park entrance ticket. You must have cash (US dollars or local “Q” -short for Quetzal) in exact amounts, and have your passport with you (at the time of our visit it was 150 Q per person, or about $22). You can check on the latest entrance fee amounts at the site listed above (see official Park regulations). This whole process took about 30 minutes for all of the passengers on the bus. We got back on the bus and then drove another 20 minutes or so into the Park (it’s big!), and then we were dropped off at a central location where the various tour groups connected with their guides and got organized. We then made our way to the pedestrian entrance, which is another 5-10 minute walk from where the bus drops you off. Speaking of tour guides, I rarely use them, unless absolutely required. The map we bought at the pedestrian entrance gave us the basics about each temple group, plus there are signs at most major sights too. 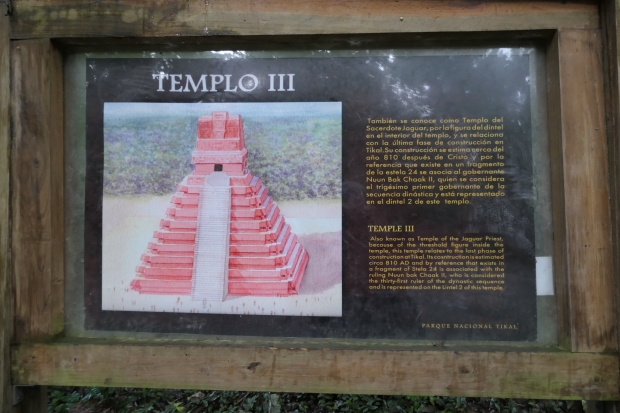 These signs (in Spanish and English) are at most major temples or complexes, making it easy to learn what you want right there.

Let’s be honest, not all that much is known about Mesoamerican archeology or history, so the tour guide’s information is going to be limited anyway and will just slow down your visit.

You must hang on to your bus ticket (do not lose it!), and then catch one of several buses going back to Flores in the afternoon. It’s better to be ready for the return trip to Flores a bit early (like around 2:30 pm for a 3 pm departure). I noticed tourists were getting a little antsy that the buses were filling up at the end of the day (3 pm was the designated time when the last bus would take off for the normal day), and it appeared there were more people than seats, but the transportation company commandeered a couple other vans to transport tourists back to Flores. The ride back took about 1.5 + hours, including a stop at the airport to drop those off who had flown in that morning and a drop or two for other guests staying somewhere other than Flores. We got back to the hotel in time to have dinner before heading to the airport for the flight back to Guatemala City that evening.

Finally, please don’t be the “ugly American” tourist (regardless where you are from). Obey signs (i.e. don’t climb where you’re not supposed to), don’t litter, don’t be rude to the Park staff or other tourists. I hate when I read about tourists causing problems at popular tourist sites–e.g. going to jail because they have to climb to the top of the Pyramids of Giza, Egypt for the best Instagram image. These sights are sacred to the local population and need to be treated accordingly. We are guests in their country. The last thing we want as global explorers is to have sights become more restrictive because of a few dumb acts by thoughtless people. Enough said!