From Quepos & Manuel Antonio National Park (see Costa Rica – Pura Vida I), we drove (via a hired driver and car) to the town of La Fortuna, near Arenal Volcano, in north central Costa Rica. This ride took about 5 hours, although it’s only 135 miles (218 km). The roads are narrow, slow, and twisting through the mountainous countryside.

We arrived at our hotel in La Fortuna in the early afternoon, and the hotel very kindly helped us arrange the activities for our short stay. My wife, son and daughter were able to take a tour of a cocoa (chocolate) plantation that same afternoon, while I hit the hotel’s pool. 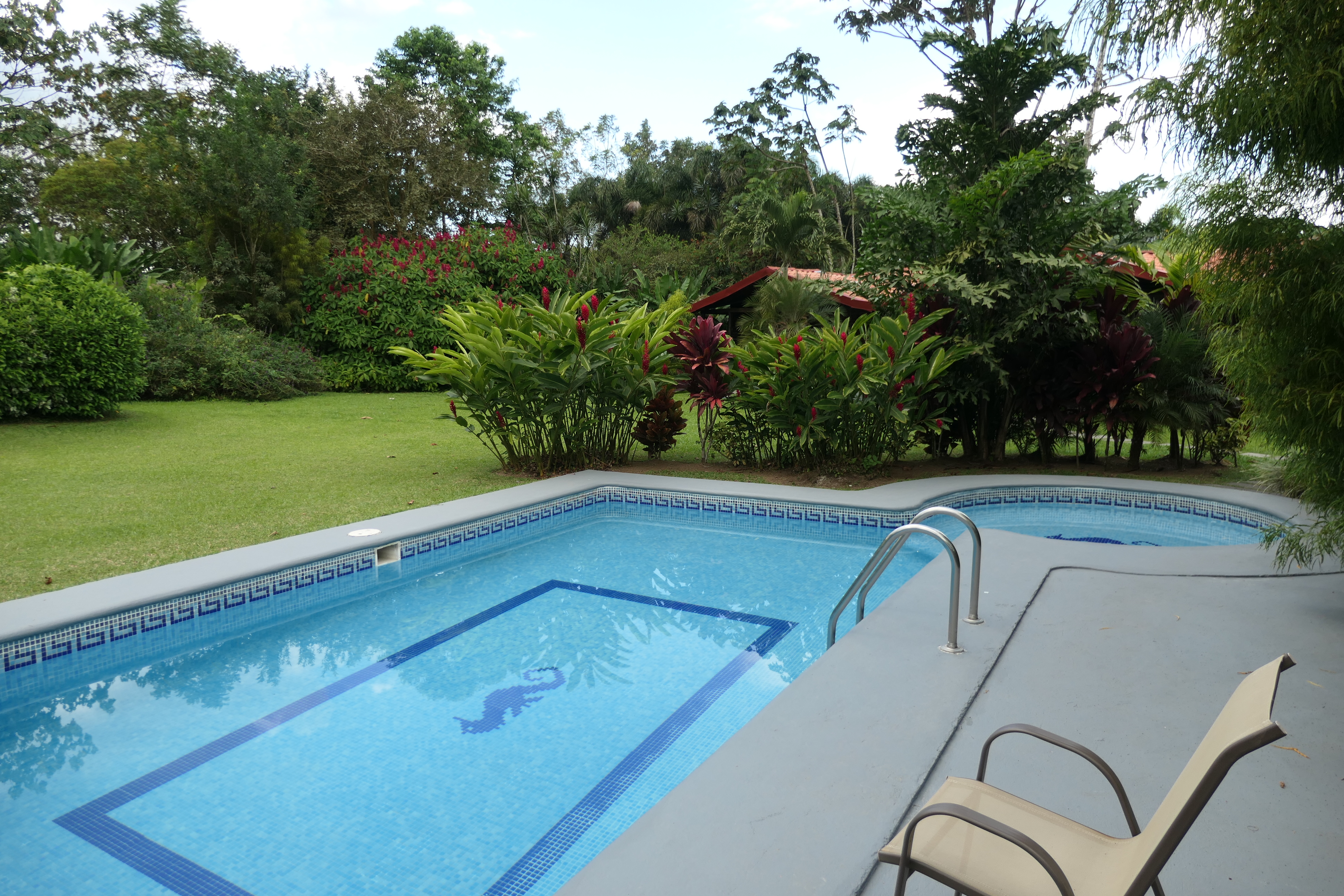 The pool at our small hotel on the outskirts of La Fortuna. It felt good after a 5 hour drive!

My family couldn’t stop talking about the cocoa tour when they returned–they learned a lot and really enjoyed it. We all enjoyed the ground cocoa bean mix we brought back to the U.S, it made the best hot chocolate I’ve ever tasted.

The hotel helped us arrange an all-day tour for the following day, our only full day in La Fortuna. It was a good tour and covered a lot of ground. We did the following in our one day:

The first activity was a guided hike on lava flows near the base of Arenal volcano.

This sign points out that the lava flow we hiked over happened in 1968.

Our hike through the lava fields with Arenal Volcano in the background.

We climbed through the lava fields and jungle-like vegetation, with some good views of the volcano and surrounding countryside, including Lake Arenal.

Lake Arenal, from our hiking trail.

We then traveled to La Fortuna Falls, where we hiked down a steep hill (via a long wooden stairway) for about 1/3 of a mile to the base of the beautiful falls. 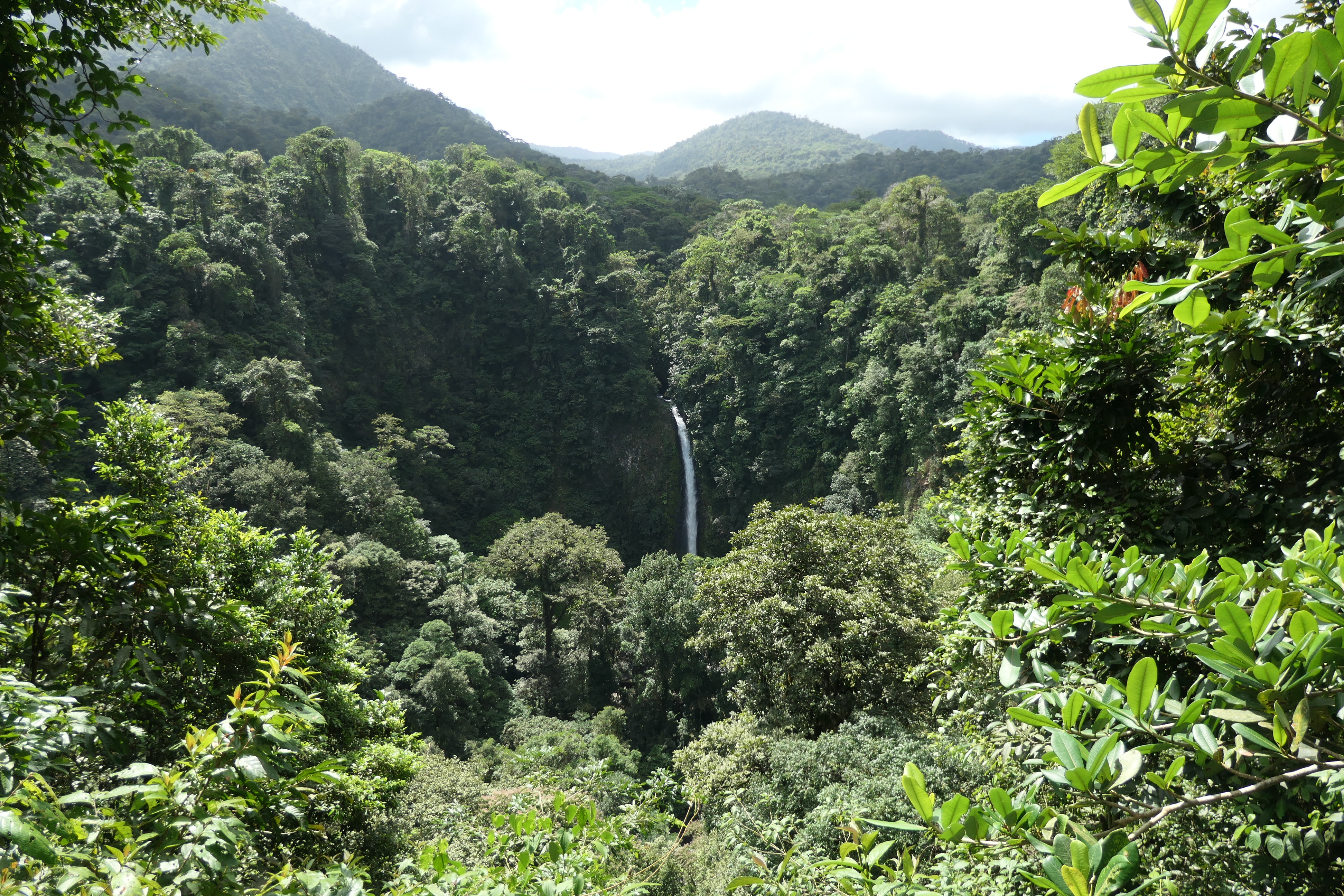 View of La Fortuna Falls at the start of the hike. 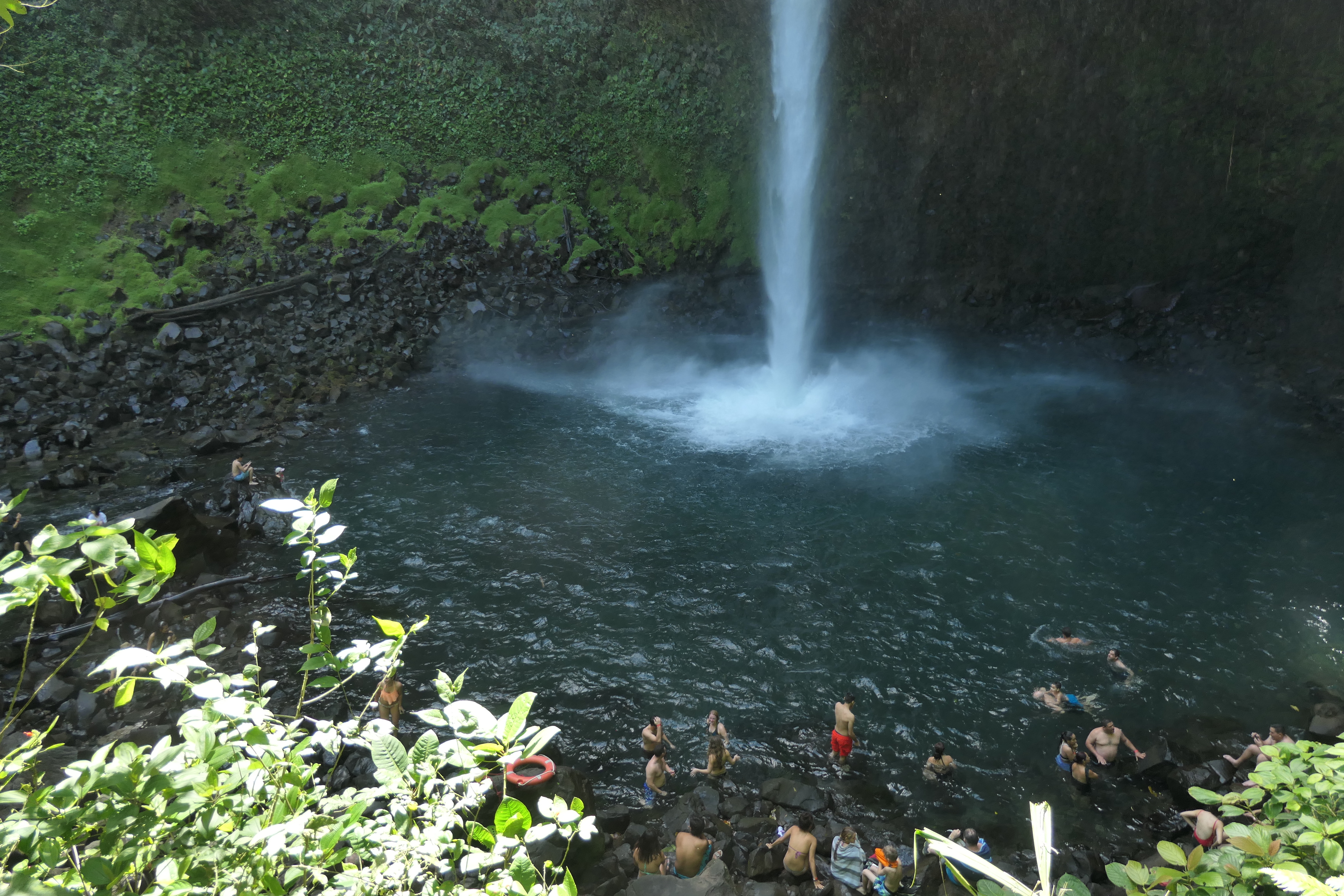 Reaching the base of La Fortuna Falls after a steep stairway down. 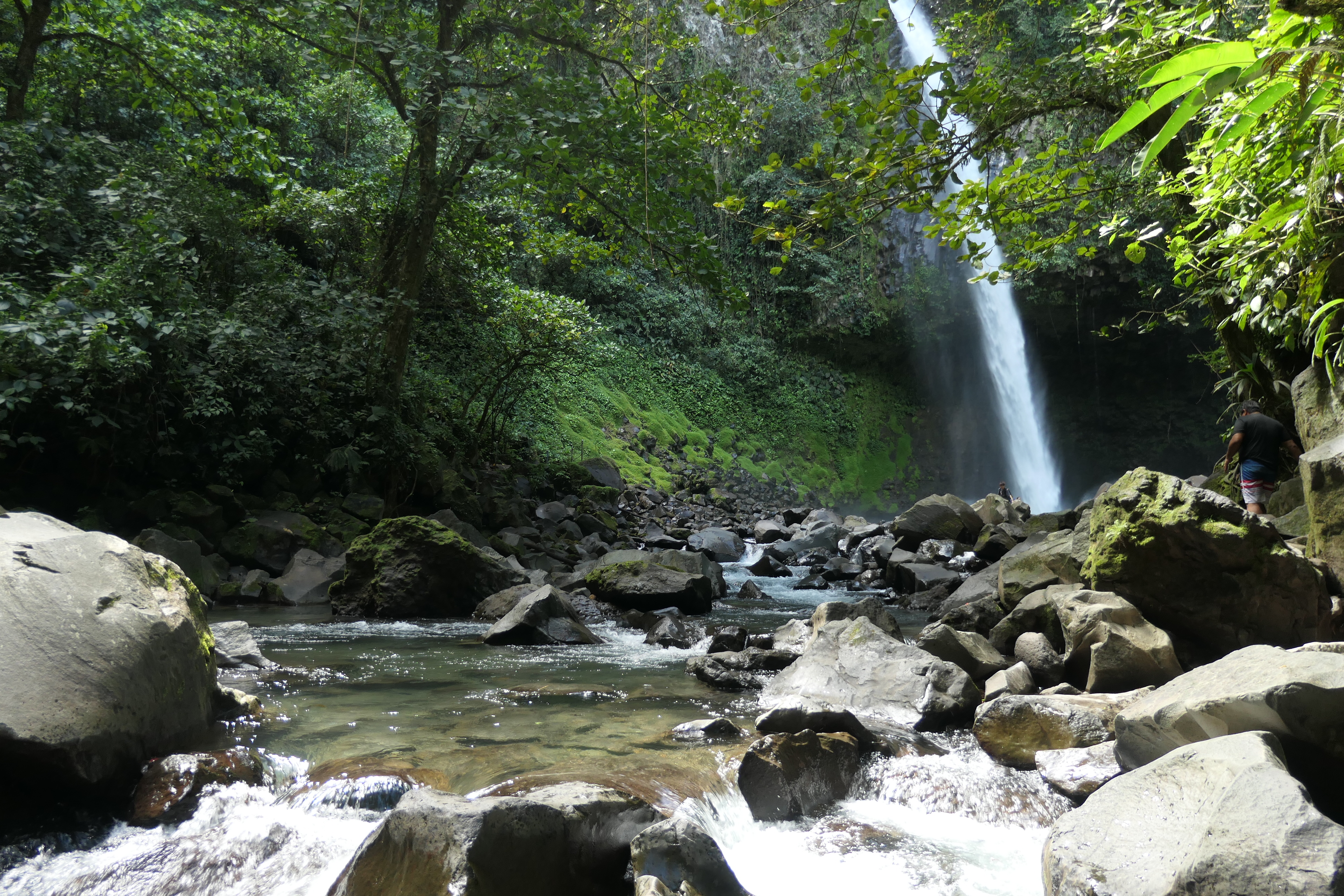 Another view of the base of La Fortuna Falls.

There were several natural pools when you can wade into the water and get a refreshing shower from the spray of the falls.

Another beautiful pool near the base of La Fortuna Falls.

There are also some wooden platforms and benches for changing shoes and toweling off after a swim. At the entrance to the Falls there is a restaurant and small shop.

After a very good lunch, we drove out to an extensive set of hanging bridges constructed through the jungle, again with some great views of the volcano, which dominates the landscape.

View of Arenal Volcano from the Hanging Bridges park. 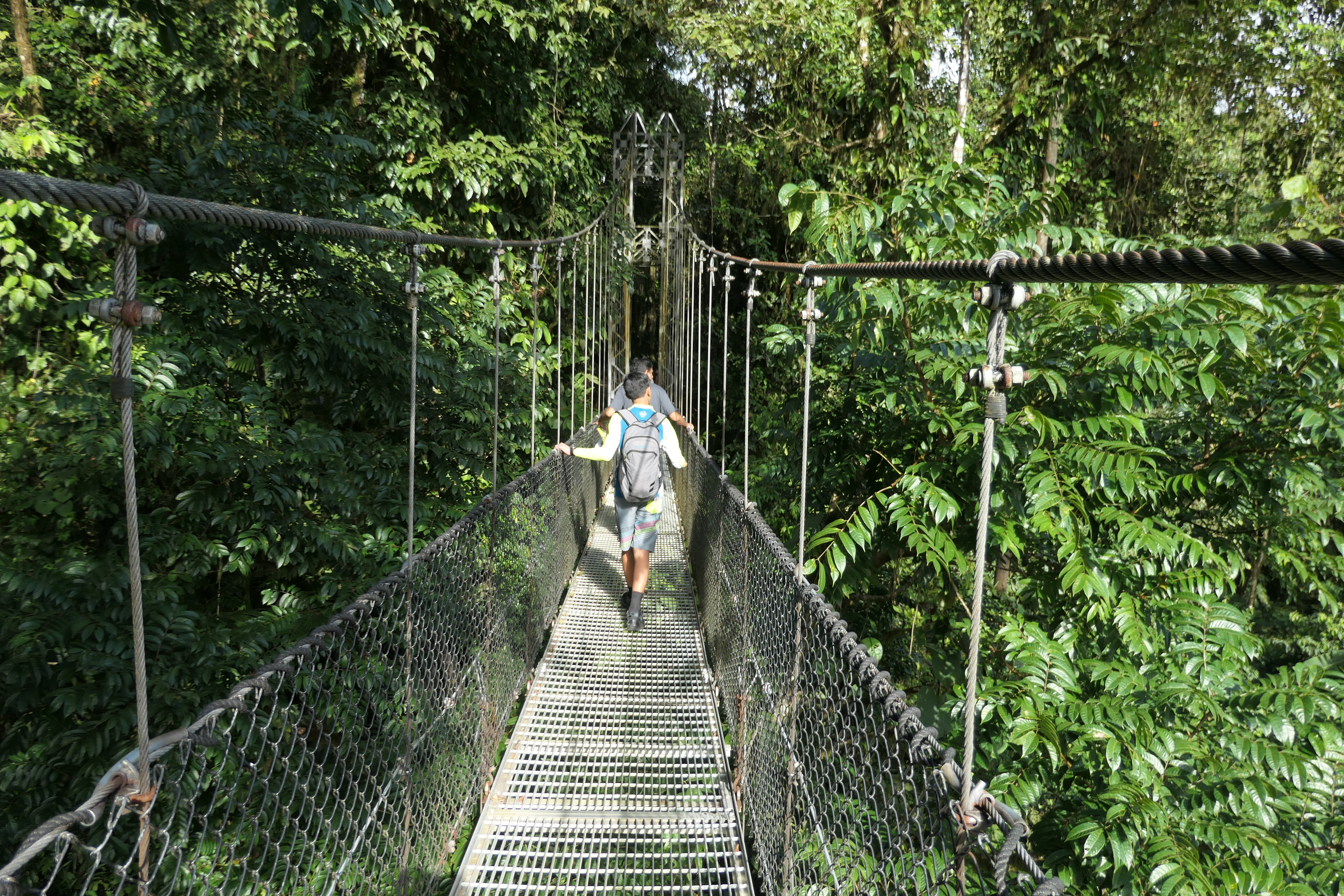 One of the hanging bridges.

I love this image of the tree I took from the hanging bridges. The leaves look so intricate.

These bridges are suspended over some deep ravines. We learned about the local plant and animal life on this walk. As you wander on the trails and over bridges you wonder how many creatures’ eyes are following you!

Visiting these hot springs was probably the highlight of the day. In this volcanic region, there are numerous hot springs, many with beautiful hotels/spas built in and around them. 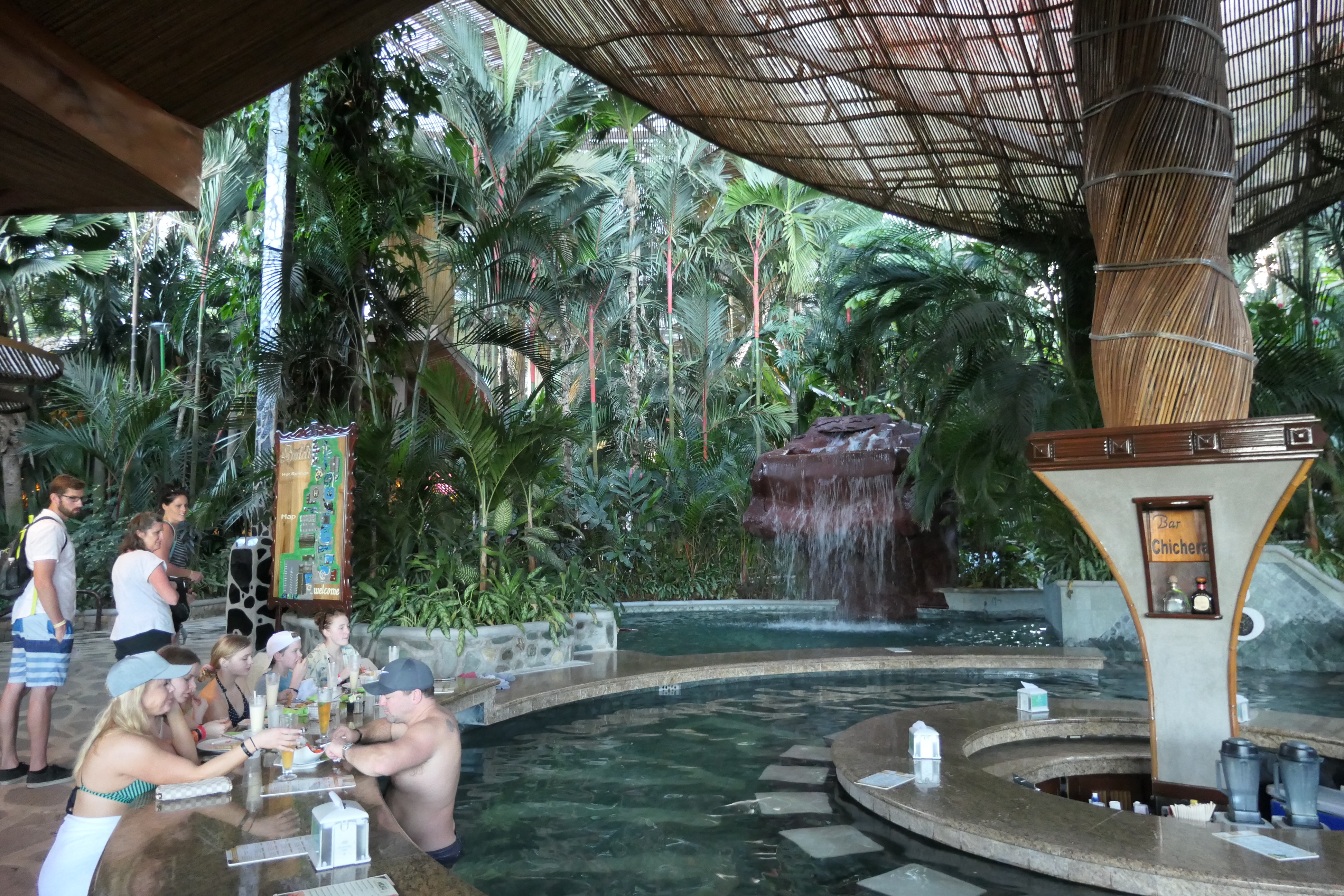 One of the pools at Baldi Hot Springs. There are numerous pools that vary in temperature. We tried several of them, it would take half a day to try them all! 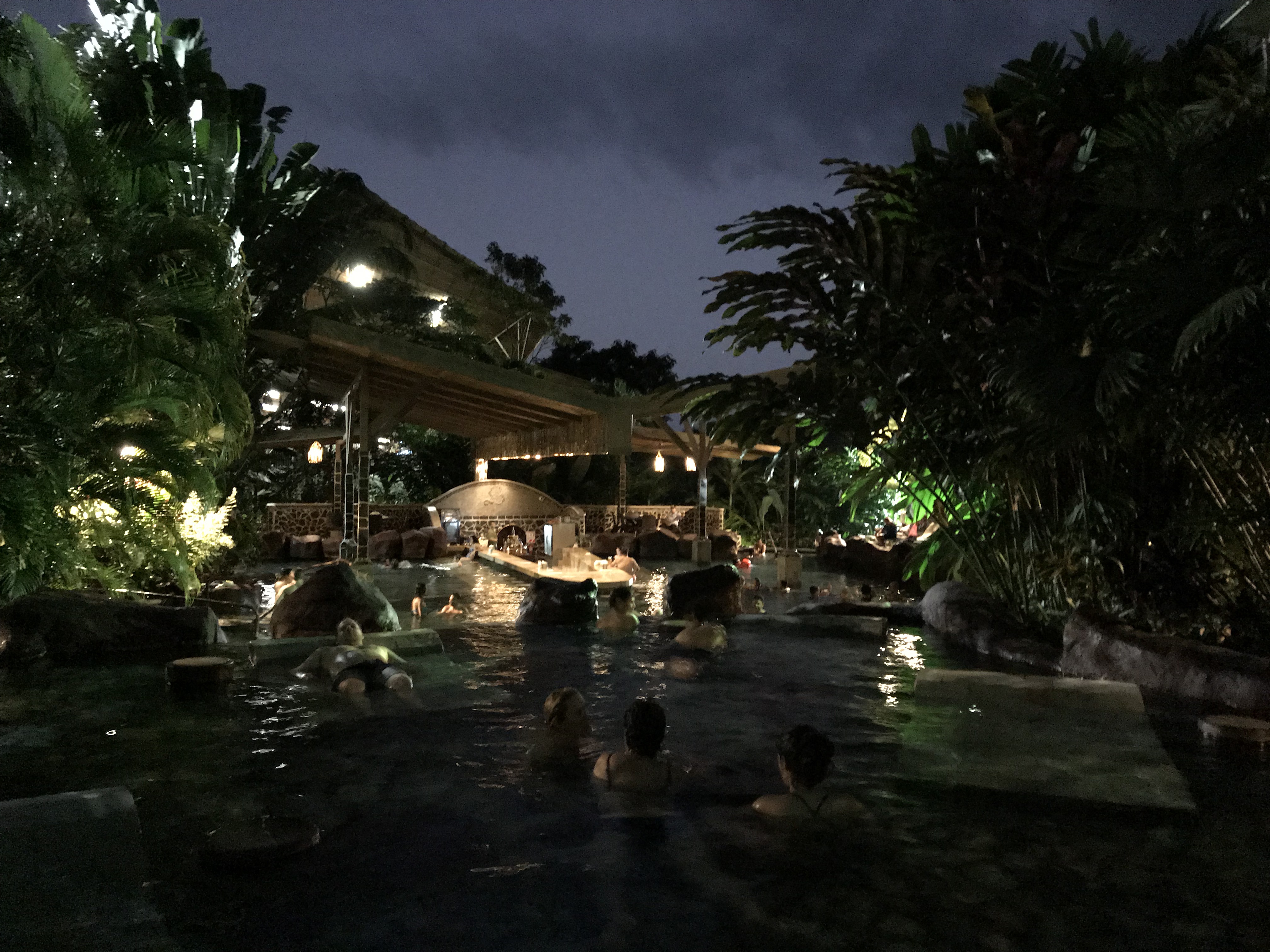 You also see areas along the rivers with hot springs where locals hang out without paying the high resort fees. We spent a couple hours enjoying the a series of pools (and fun slides!) and then indulged ourselves at a buffet dinner at the resort, before being picked up and transferred back to our hotel.

Although Baldi Hot Springs is beautiful, this particular hot spring/hotel was probably our 2nd choice, since we had only booked the day before and it was a holiday period (New Year’s). Our 1st choice, Tabacon, was fully booked. We won’t complain too much, Baldi was great.

It was a very enjoyable stay in La Fortuna. If I were to go back, I’d spend a few more days in this area, explore more of the hot springs and enjoying  ATV’s and other adventures. The next day we had a driver take us to San Jose, where we spent the afternoon/evening before flying back home the following day.