Out of all the places I’ve visited in Egypt, Alexandria probably had the least to offer the tourist, and yet there was no way I was going to pass up an opportunity to go there, given its illustrious history. I’ve read that “Alexandria is the greatest historical city with the least to show” and that seems to be true, unfortunately. For a map of places visited in Egypt, click here, scroll to bottom of page.

Buying some fruit from a local Egyptian vendor.

Alexandria was the home of Queen Cleopatra and the city rivaled Rome in beauty. It was the center of scientific learning with a world-renown library (700,000 volumes). It also had a huge lighthouse (called Pharos) that was a wonder of the ancient world (394 feet high) and was in working order for 1,700 years (until an earthquake toppled it in 1303).

Alexandria was founded by Alexander the Great (in 331 BC) and was one of the greatest cities of antiquity. Alexander is buried here, but the exact location of his tomb is not known. The city of Cleopatra’s time is now largely under water and about 18 ft. below street level. Every so often there are major finds, such as the Roman catacombs discovered in 1900 when a donkey disappeared through the ground.

Here are a few things to see in Alexandria:

Roman Amphitheater (Kom Al-Dikka). This is the only Roman Amphitheater in Egypt. It is well preserved and if you stand in the right spot on the center stage, the acoustics allow you to hear your voice being amplified around the theater. There are more excavations going on in this area.

The Roman Amphitheater in Alexandria.

Pompey’s Pillar and Serapeum. This area contains several above-ground ruins and underground chambers. The Pillar was erected in AD 291 to support a statue of the Emperor Diocletian and is still standing in its original spot. The pillar takes its name from the Roman general Pompey who was murdered by Cleopatra’s brother (although he has nothing to do with the pillar). The Serapeum was a large temple complex which also had a huge library. The underground chambers show the foundation and library remains. 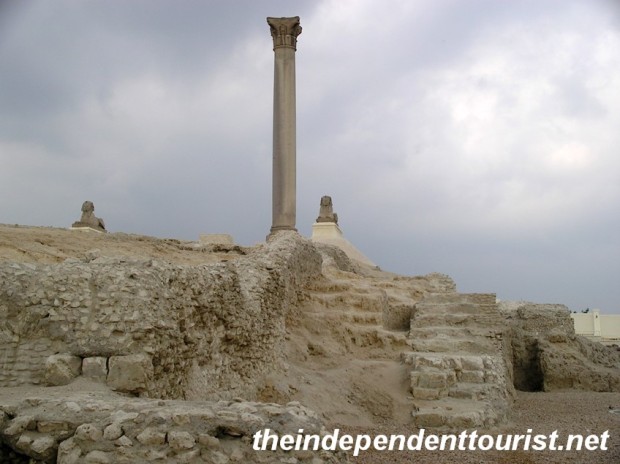 Pompey’s Pillar and the surrounding ruins of the Serapeum.

Roman Catacombs (Kom Ash-Shuqqafa). Close to Pompey’s Pillar are the Roman catacombs, which is probably the most fascinating historical site in Alexandria. Unfortunately, I could not take pictures in the catacombs (except for one quick shot below). There are three underground levels, the lowest of which is flooded, but the other two levels are open and can be visited with a guide—even the 2nd level has some water on the floor, which you avoid by walking on planks. You descend via a staircase and enter a large rotunda with numerous rooms branching off in every direction. The catacombs were constructed in the 2nd century AD and eventually housed the remains of 300 people. Before visiting, be sure to check opening hours and days of the week.

An ancient sarcophagus at the entrance to the Roman catacombs.

One sneaky photo in the Roman catacombs.

The Al-Corniche. Alexandria is a long narrow city built along the Mediterranean shoreline. The Corniche is a popular socializing spot for locals, especially after dark, with street vendors selling all kinds of snacks and young couples strolling hand in hand enjoying the fresh breeze.

The Corniche in Alexandria.

From the Corniche you can glimpse Fort Qaitbey, which was built in 1480 on the remains of the ancient Pharos lighthouse. The fort is open to the public but our short visit (just one full day) did not afford us time to go out and see it. 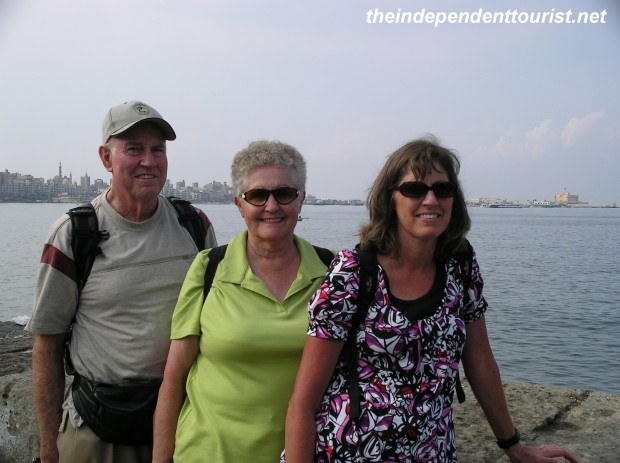 Fort Qaitbey is in the far distance at the right edge of the picture.