Note from the Independent Tourist: The below post was written by my nephew, Mark Bitton, who climbed Mt. Kilimanjaro in the spring of 2017. At the bottom of this post, he provides some practical tips for anyone considering this climb.

Mt. Kilimanjaro rises 19,341 ft. above sea level and is the highest freestanding mountain in the world. Being in Africa, the average temperature is higher, making it one of the few 5000m+ mountains in the world that can be climbed without crampons, ice picks and technical training. In fact, the primary skill level required to summit is simply being in reasonably good shape, which is why over 25,000 climbers a year come to Tanzania and attempt to summit Mt. Kilimanjaro. That said, not everybody makes it to the summit. The Kilimanjaro National Parks department put out statistics showing that of those climbers that tried to summit in 5 days or less, only had a 27% success rate. By contrast, those who take 8 days to summit have about an 85% success rate. In other words, it’s not about how fast you can run the mile, it’s based on how your body acclimates to the higher altitude and the more time you give your body, the greater your odds of success.

Turning 40 this year, my primary motivation for flying solo to Tanzania was not solely recreational. My life lacked a sense of adventure and the idea of traveling alone to Africa and scaling one of the world’s taller mountains seemed to adventurous and frankly a little scary. I’d never climbed anything higher than 14,000 feet and had only done that once. In addition to not knowing how I’d do with the altitude, by going alone, I was to be mixed in with a hodge-podge group of 11 other climbers from around the world. Fortunately, not only did they all speak English at least as a secondary language, but we quickly discovered everybody in the group to be very friendly, open and humorous. 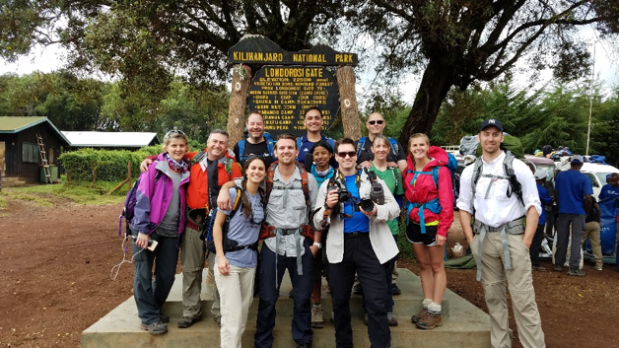 Our climbing group. (That’s me on the right in the white shirt).

In 8 days, I felt like I’d made lifelong friends with almost everybody in the group.

Day 1:  The first day entailed a muddy drive up to the starting point of the hike. We were doing the Lemosho Route, so most of the scenery at the bottom of the mountain was tropical rain forest. It was pretty humid, though already being at about 4,000 feet, it wasn’t as hot as it had been down in Moshi or Arusha, the two closest towns to the base of Kilimanjaro.

Day 2:  On Day 2 you hike for about an hour before you say goodbye to trees for the remainder of the climb. Much of day 2 was filled with what I would describe as overgrown sage brush.

At the end of Day 2, we were introduced to all of the porters and guides in our group. In all, there were 36 porters (guys that carry a portion of your equipment, food and tents, etc.) and 8 guides.

Days 3-5:  If you’re looking for lush, verdant vistas and valleys, this is not the place. There is no mistaking Kilimanjaro for anything in the Swiss Alps. The terrain is rocky, with very little vegetation and very little protection from the sun. There are some plants you’ll find on Kilimanjaro that cannot be found anywhere else in the world.

This is the Senecio Kilimanjari plant. Each branch represents 25 years of age – some trees are over 400 years old.

The weather can change quickly as well. We were fortunate that Day 5 was the only day in which we were soaked by a heavy thunderstorm. Nobody’s “rain proof” gear proved completely waterproof and when combined with our sweat from hiking, it made for a soaked day. Most of the day was filled with conversation while hiking, mixed in with a bunch of “pole, pole” reminders from the guides, which is Swahili for “slow, slow”, reminding us that in thin air, going slow will help us adapt better. Our late afternoons and evenings were generally occasioned by a couple of card games, dinner and then hitting the pillow early each night as camp fires were not allowed.

Typical terrain on Days 3-5 of our climb.

Days 6-8: Due to the rocky nature of the landscape, we were impressed at how well the porters did in finding flat spots for our tents.

Our camps included facilities for sleeping, eating and a portable potty.

On Day 6, we arrived at the final base camp named Barafu, which is at about 15,331 feet.  The air was noticeably thinner here and we were told to sleep as much as we could before and after dinner as we would begin the final ascent at about 11pm. I was not accustomed to sleeping in the afternoon and my brain refused to sleep. (Side note: It’s not safe to take sleep aids at this elevation). So with no sleep, we started climbing for Uhuru Peak, which was another 4,000 ft vertical climb in the dark, with only headlamps to show the way. The higher we went, the colder it got. I tried sipping from my CamelBak® every 5 minutes or so to keep the line from freezing, however, about an hour before the summit, it froze anyway and the rest of the way I was without water and only had snacks that were frozen solid. Not everything was pain and drudgery however. The star filled sky from the top of Kilimanjaro was magnificent.  I’ve never seen the stars with such clarity and brilliance. The final ascent was quite hard and only through extreme determination and effort did about 2/3 of our group make it to the peak. The other third did so without too much of a struggle.

The exhilaration of making it to the top – 19,314 feet above sea level.

I felt extremely fortunate to not feel the heavy toll of the altitude as extensively as most of my hiking comrades. Talking became rare as we approached the summit simply because the expiration of breath cost too much to do so. That is, except for the guides of course who seemed to be well acclimated and accustomed to the hours and the elevation.

From the summit of Kilimanjaro at sunrise. What a beautiful sight.

Around 6:30am we arrived at the peak, just in time for the sunrise, the dim light revealed a large glacier near the peak and the solemn expanse of a treacherous and rocky peak.

Once you’re at the summit and have taken your pictures, there’s no hamburger joint to hang out at, so after about half an hour of the frigid cold, we headed back down. The journey back down proved to be the most difficult part of the entire hike for me. Upon beginning our descent, I’d now been awake for over 25 hours straight and the exhaustion from a combined lack of sleep and thin air was beginning to be apparent. The descent was steep and filled with loose shale and rocky dust, resembling volcanic ash more than it did a loamy dirt.

About half way down to the Barafu base camp, my knees started to feel the pain of absorbing the stress. I hobbled into base camp at about noon and was told to sleep as we would be doing some more hiking that afternoon. At this point I had a pounding headache, was sweating profusely and had both knees throbbing. 800mg of Ibuprofen didn’t seem to make the slightest dent and I had no hunger for lunch. I didn’t even come close to sleeping that afternoon and around 2pm we headed out for what I thought would be a short hike to get to a lower elevation. Twelve miles later and what felt like a gazillion rocky stairs later, I finally arrived, dead last to the camp. In all my life, I’ve never felt so exhausted. I had gone just over 40 hours without sleep, in some of the most strenuous conditions I’d ever faced. When my head hit the pillow that night, sleep finally came easy and I enjoyed one of the most restful nights of sleep I’d had in years. The next day, I awoke and to my great relief, with sleep my leg muscles had rejuvenated and my knee pain as a result had dissipated about 75% making the last 8 miles of decent feel easy by comparison to the prior day.

When I’d left the U.S., I’d wanted it to be tough. I was looking for a challenge, so in an odd way, I found the grueling descent experience perhaps the most rewarding part of my adventure. Most of the others I should note, did not have similar issues with their knees. I guess that’s my reward for enjoying one too many skiing moguls as a youth.

Our tired, but happy group. Photo by Slavo Hepka

Upon returning I’ve been asked by several persons if I’d experienced the adventure I was looking for. Yes, I did. However, on Kilimanjaro I discovered that it’s not simply about experiencing an adventure, it’s about finding the heart of the adventurer inside yourself.  That, my friends, is a thirst I cannot quench, but one in which I’m happy to live the rest of my life pursuing. ‘Til the next great adventure. 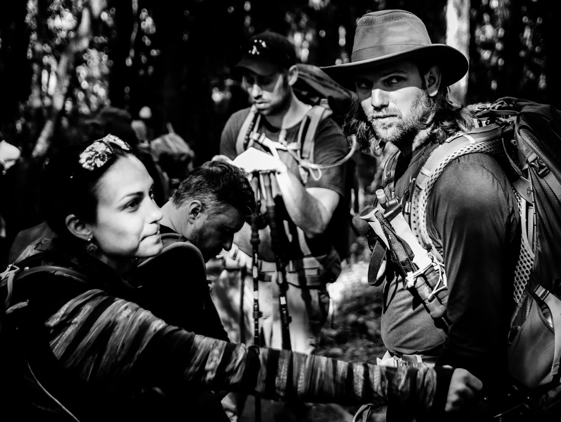 Season: The Kilimanjaro climbing season is late September through late February, with November – January typically being the best weather.

Tour Company: The company I used was “Ultimate Kilimanjaro”. Of the companies I researched, they had the best combination of overall value, price and expertise. I also added a two-day safari at the start of the trip. Very worthwhile.

Access: Kilimanjaro National Airport, near Arusha. The mountain is near the city of Moshi, about a one hour drive from Arusha.

Route: Our tour company took the Lemosho Route, about 42 miles total, and one of the longer routes. Most of the miles are spent going up and a shorter route is taken coming down.

Preparation: I am in fairly good physical condition, exercising regularly. I hiked 5-10 miles a couple times a week with a 50 lb pack for a couple months prior to the trip. The porters carry most of the camp gear and the group members each carried about 25 lbs of personal gear with them. Most of the group was between the ages of 20 and 50. You do NOT want to have medical attention on this trip. Very difficult to get assistance.

What to Bring: The website provides lots of information. Don’t skimp on the rain gear or warm weather clothing. Also, bring a couple card games for entertainment – there are no campfires so evening entertainment is limited. Solar is the only practical way to charge your electronics (e.g. phone) and lamps, and they will probably not last long each day. Diamox for altitude sickness is very helpful.