Copenhagen is a great city for tourists with lots to see in a relatively compact area. We spent about a day and a half exploring the town, walking everywhere. With all the canals and harbors, Copenhagen reminded me (just a tiny bit) of Amsterdam, but it definitely has its own personality and character.

This is a neighborhood located across a large canal on the east side of the old town and originally was part of the fortifications of Copenhagen.

This district is home to Christiania, or Freetown Christiania, a bohemian community having some autonomy from Copenhagen, and Denmark, for that matter. The community is one of Copenhagen’s most famous sights. 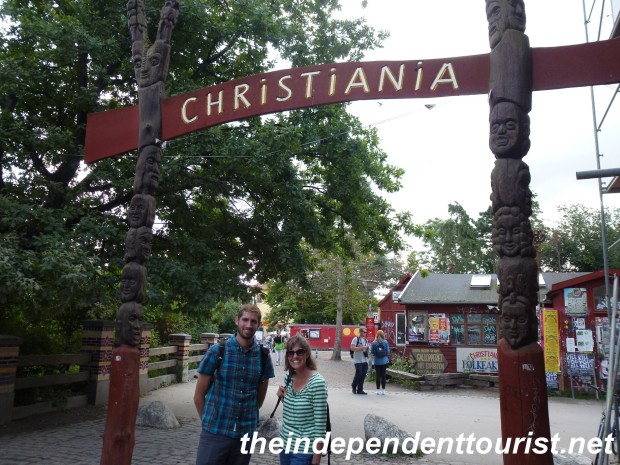 The “border” into Christiania. 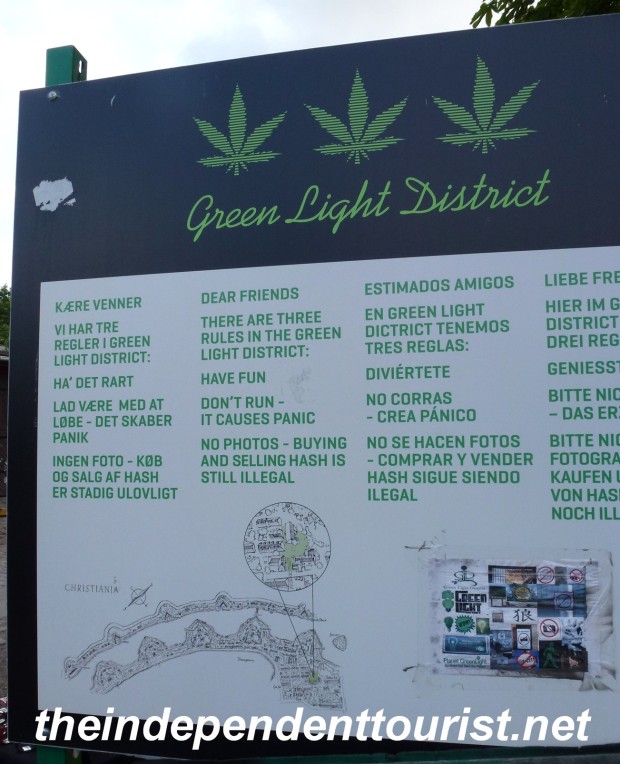 A sign in four languages welcoming visitors to Christiania and explaining the rules. 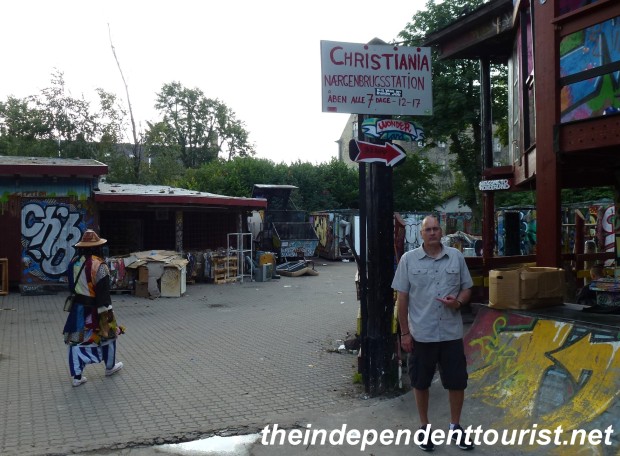 One of Christiania’s residents on the left side of the picture. 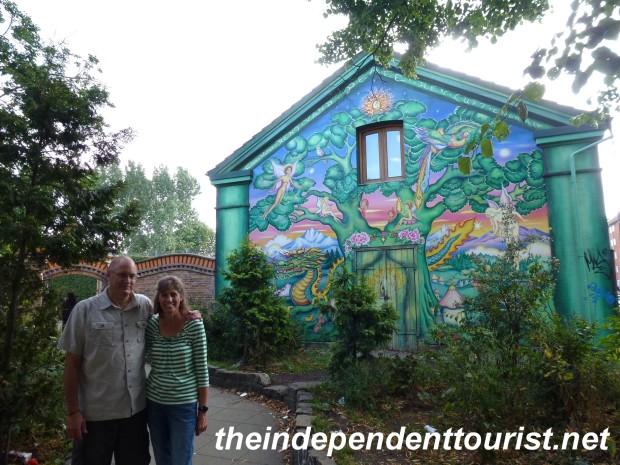 One of the many colorful buildings in Christiania. 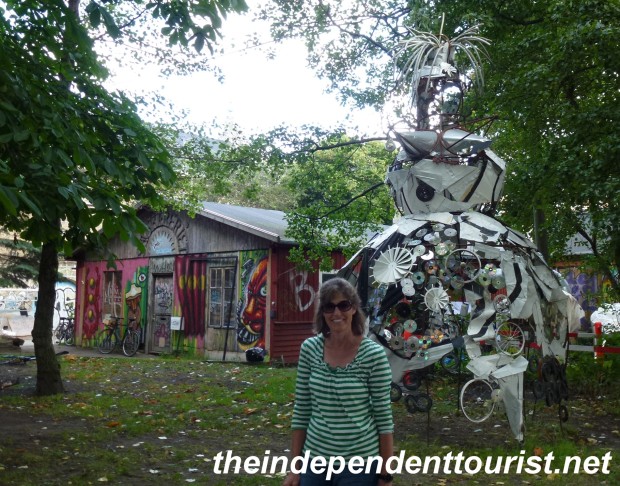 Robyn stands by a creative sculpture in Christiania.

If you’re looking to see something different than the normal historical tourist sites, this is the place. Photographs are forbidden in the main part of the community (to keep the “citizens” from being recorded or identified since there is an active “soft drug” trade here). There are ongoing legal battles between the community and the Danish government. 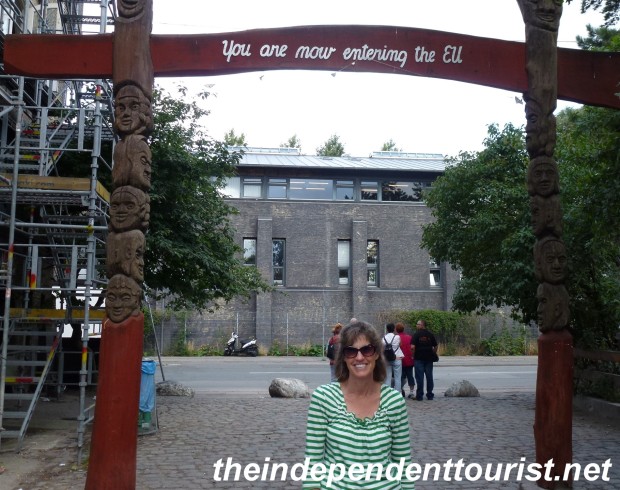 Our Savior’s Church.  The tower of this church dominates Christianshavn, and is one of the taller structures in Copenhagen.  Part of the climb up the tower is inside and then the last part takes you outside, as the steps circle the round tower and narrow to nothing at the very top, giving great views of Copenhagen. 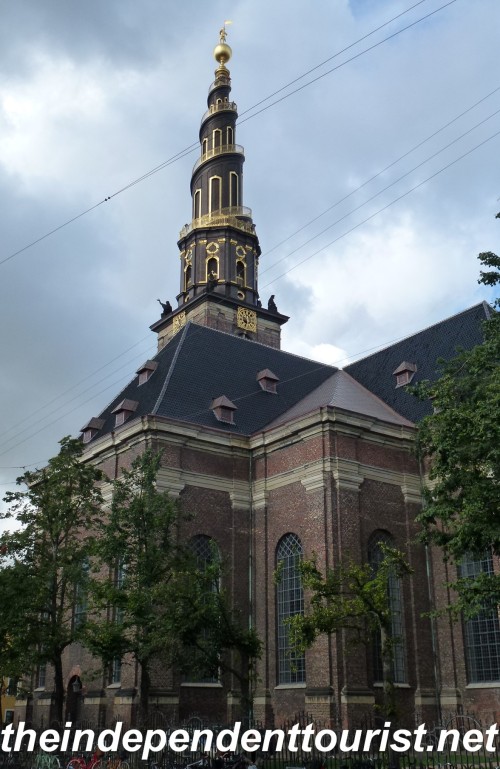 A view of Our Savior’s Church, just a few blocks from Christiania. Note the round tower and the stairway circling to the top. 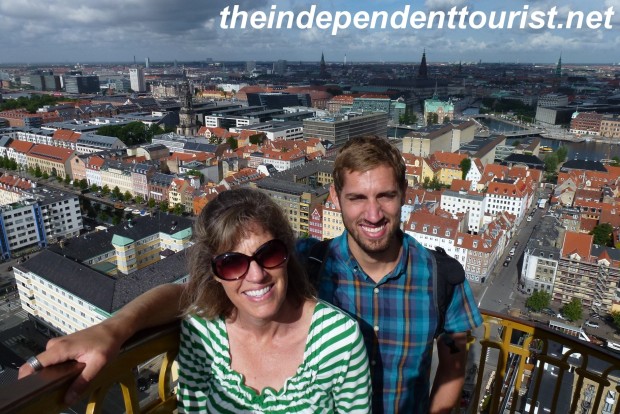 Robyn and Sean on the tower’s outside stairs overlooking downtown Copenhagen (looking west). 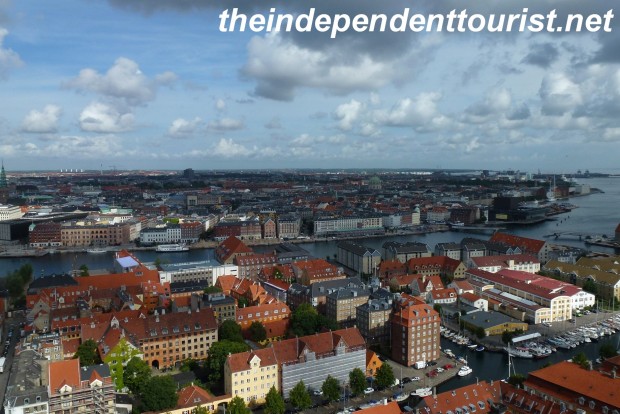 Another view of Copenhagen from Our Savior’s Church tower, looking northwest. Cruise ships dock in the upper right area of this photo, which is close to the “Little Mermaid” statue.

Practical Notes: The main train station is only about two stops (15 minutes) from the airport and has storage lockers (lower level), which are handy if you’re in transit or looking to store your luggage prior to boarding a cruise ship. The main train station is very conveniently located, right next to Tivoli Gardens, one of the world’s first amusement parks, which opened in 1843. Given all the other sights to see, we did not spend time here. We stayed at the Marriott hotel, just a few blocks east of the train station, a great location for tourists.  Be forewarned that Copenhagen is expensive, but perhaps slightly less so than its other Scandinavian counterparts, Oslo and Stockholm. Denmark uses the Danish Krone (DKK), not the Euro as its currency.