In New Delhi, India, on the eastern side of the city, near the Yamuna River is Humayan’s Tomb. 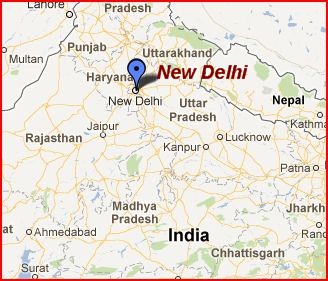 It is a short walk from the Oberoi Hotel, one of the finest hotels in the city (I thoroughly enjoyed the excellent service and room–stay there if you can).

Humayun was 2ndMughal (meaning Muslim, also spelled Moghul or Mugal) emperor. The Mughal emperors were generally able military leaders and were accomplished in many of the arts and sciences. Although Humayun was considered less of an effective military commander than his father (Babur, the first Mughal emperor), he did have a passion for astronomy and astrology and organized the empire’s administrative matters based on the planets (for example, Tuesday, governed by Mars, was given to matters of justice). His reign spanned 25 years, although 15 of the 25 years were spent in exile, including time in Persia, a culture which was to have great influence on the architecture of the Mughal Empire. Humayun returned to the throne in 1555 with the help of a Persian army, but his return was short-lived—he died less than a year later.

The similarity in style to the Taj Mahal is unmistakable.

The tomb was built in 1569 for Humayun by his widow, Haji Begum. It was the first mausoleum built for a Mughal emperor, and became the model for the incredible Taj Mahal, built about a century later, located 130 miles south in Agra, also on the Yamuna River (see my post on the Taj Mahal).

The mausoleum is constructed of red quartzite, red sandstone and white marble inlay. The style of dome was influenced by Persian architecture and was an engineering feat for its time due to the height and shape. It was the first dome of its type in India (known as Hindustan) at the time. The dome is made of marble, and is a double dome, the interior dome being lower and more in line with the other interior heights. The influence of the Persian architecture is also evident in the 3 great arches on each side of the mausoleum.

On the well-manicured grounds there are several other smaller tombs and mosques dating from the same time period. 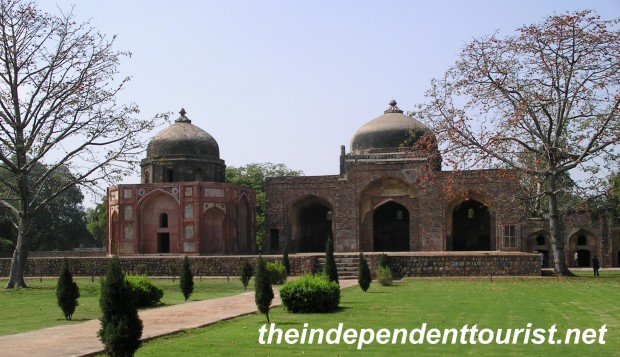 Afsarwala Mosque & Afsarwala Tomb on the grounds of Humayun’s Tomb (built in 1560).

Humayun also founded a city, now known as Purana Qila (Old Fort), about 5km north from where his tomb is located. Sher Shah, who deposed Humayun for 15 years, built a city on the foundations of Purana Qila. In addition to the walls, there is a mosque built by Sher Shah which is still standing. I did not have time to visit this site other than take a picture from the outside.

The walls of the Old Fort.