From Split we took a ferry to Hvar island, about 45 minutes away. A few words about the main Croatian ferry line, Jadrolinija. It has regularly scheduled service to many island destinations. 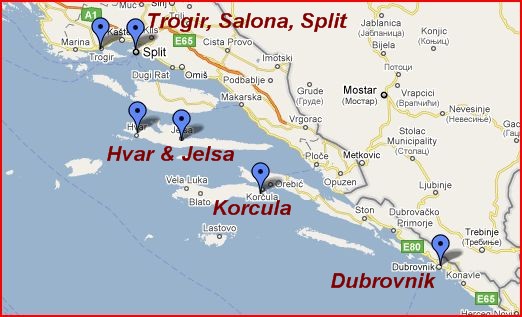 Map of Destinations we visited in Croatia.

However, I found their website a bit confusing when trying to plan our schedule, and I don’t think I’m the first person to think it’s confusing. The good news is that even in October, we found regular ferry service, and it is easiest to just ask the local ferry office or tourist information office upon arrival for schedule information. Keep in mind it’s much easier to travel by foot rather than having to take a car ferry. The passenger ferries go right to the main little towns and run more frequently, especially off-season. 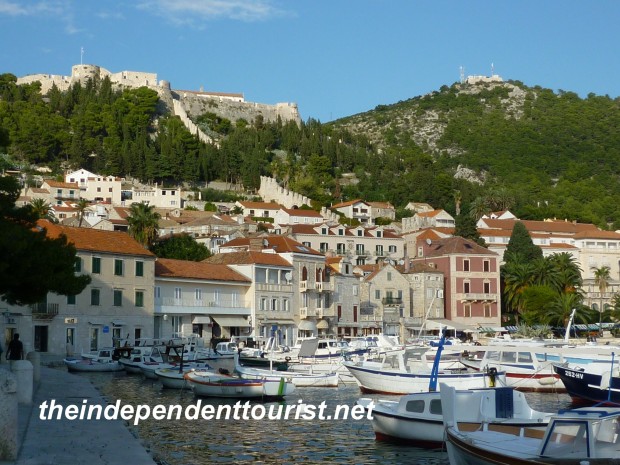 Hvar town on Hvar island is nestled around a harbor with a 16th century fort overlooking the village and harbor. Our apartment was about 10-15 minutes away from the ferry dock and our host was kind enough to pick us up with our luggage and to drive us to their apartment home. We were able to easily walk to a grocery store and into Hvar. Hvar is a small town —very scenic with historic buildings, fortified walls and narrow streets.   On our first afternoon we went exploring and found a car rental service near the bus station and made arrangements to rent a car for the following day.

The next morning we drove up to Fort, and enjoyed the expansive view of Hvar, the Pakleni  islands, and the island of Vis in the distance. 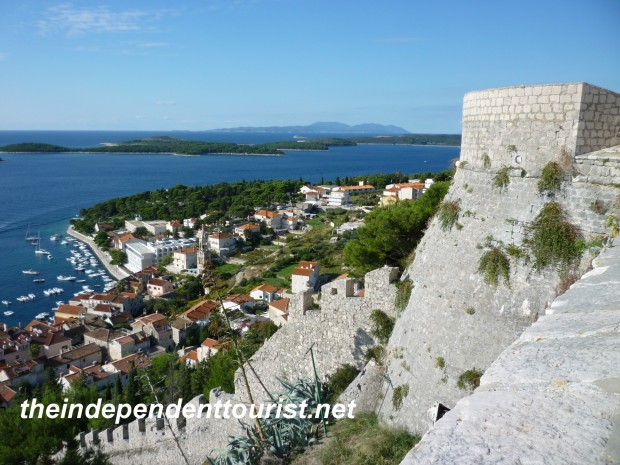 We then drove out to the small towns of Stari Grad, Jelsa and Verboska (which are all close together) taking about an hour via the scenic route.  Traffic was sparse and the roads were very good, although narrow. These towns are also historic and attractive, although not quite as picturesque as Hvar itself. 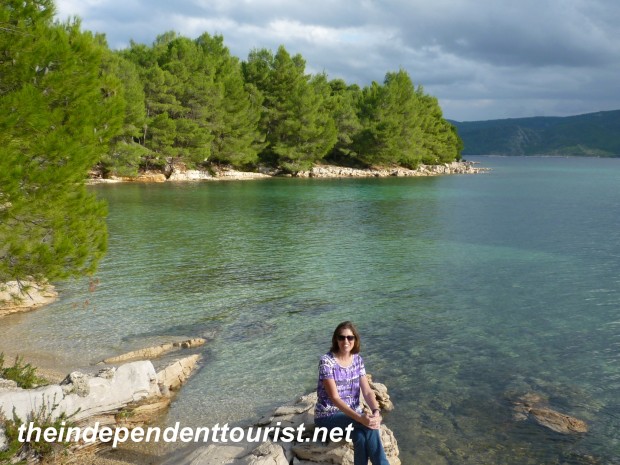 Near Jelsa there are some great beaches and secluded parks and trails that would be perfect to visit in swimming season (we were there in late October, and even then there were a few people on the beach).

Hvar island is about 80 km long, and we covered not quite half the distance, and felt we got a good feel for the island. We noticed the island is greener on the eastern side (facing the mainland) then the western side. 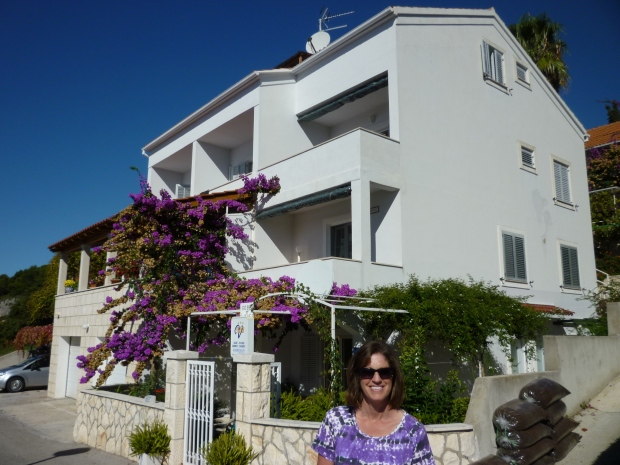 Our apartment–just a 10 minute walk from Hvar Town.

There are lots of apartments in Hvar town for rent, especially west of the Harbor. In the off-season, it should be very easy to find places to stay. There is a beautiful walkway along the shore to the west of town also.  While there were a few tourists this time of year (a few sailboats in port, and one cruise ship visited for half a day), the island was quiet, and very peaceful, even though it’s only 45 minutes from Split by ferry.

We took a passenger ferry from Hvar to Korčula (Krilo Ferries) that goes right to the town of Korčula on Korčula island. It was about a 90 minute trip. Coming into Korčula at night was stunning.  Although it’s a small town, we enjoyed seeing the old fortified towers and bell tower of the Cathedral lit up as we pulled into the harbor.

The town of Korčula is a perfect medieval-feeling town with narrow streets, archways, and towers and gates. There were lots of jewelry stores in the town, many selling coral earrings, bracelets and necklaces.  We found a great little shop right inside the main entrance (the “Land Gate”) to the old town.

Our apartment was on the edge of the town, overlooking the water and the mainland. The water was so clear that I wanted to dive in from our 2nd story room!  The streets on the southeastern side of town are curved to break the winds that come in the winter and on the opposite side the streets are straight—interesting to view the difference from the main square.  The Cathedral of St. Mark (13th-15th centuries) is built on a trapezoidal shape for this reason. 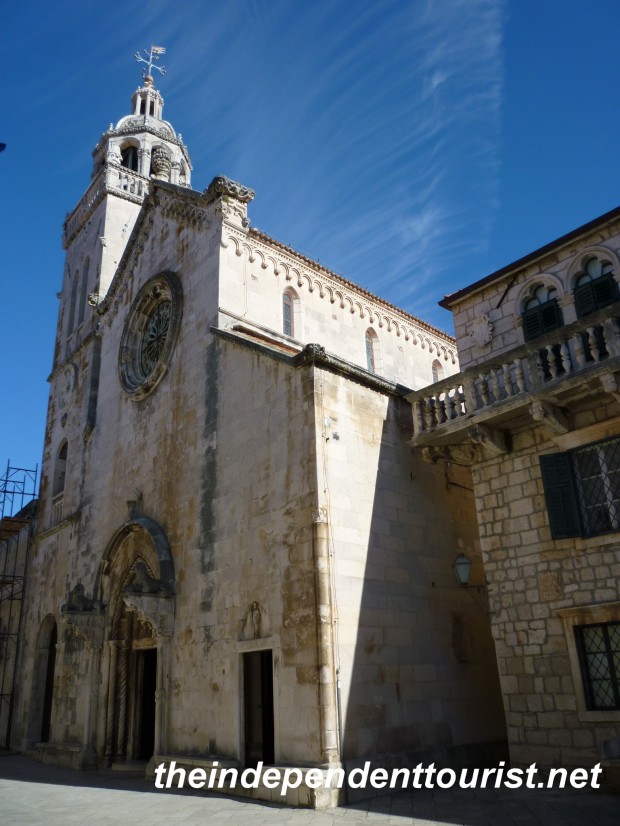 From the Land Gate, one can take stairs to the top (for a fee) and have a great view of the whole old town. Marco Polo’s house (really just a tower next to the shell of the old house) is open, and climbing to the top provides a nice view of the town and across to the Pelješac peninsula. We enjoyed just wandering the old streets, visiting a few museums and shops and relaxing on the balcony of our apartment in the bright sunshine. Given that we were only in Korčula for two nights and one day, we did not rent a car to explore more of the island. It was a perfect amount of time to see the old town, relax and enjoy the ambience.

As usual in Croatia, there were great restaurants in the old town and also just outside the Land Gate area.