Located about halfway between Milan and Venice in northern Italy, Verona can be visited as a day trip from those locations, but this magical city deserves more time than just a day trip. 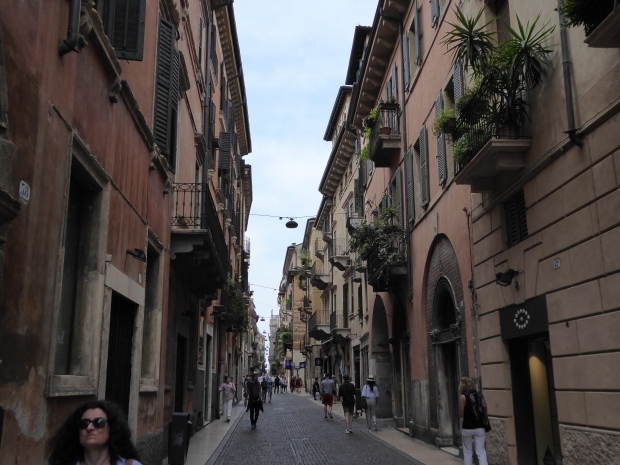 Although Verona is most famous for being the setting of the story of Romeo and Juliet (Giulietta in Italian), the city has much more to offer, like all of Italy.

Of course there are reminders of Roman times, including a huge arena which is still in use, a bridge, a gate, and walls and foundations underneath the streets and churches.

Verona is home to the third largest amphitheater in the Roman world. It dates from the 1st century C.E. It is located in the spacious Piazza Bra, near the old city walls. 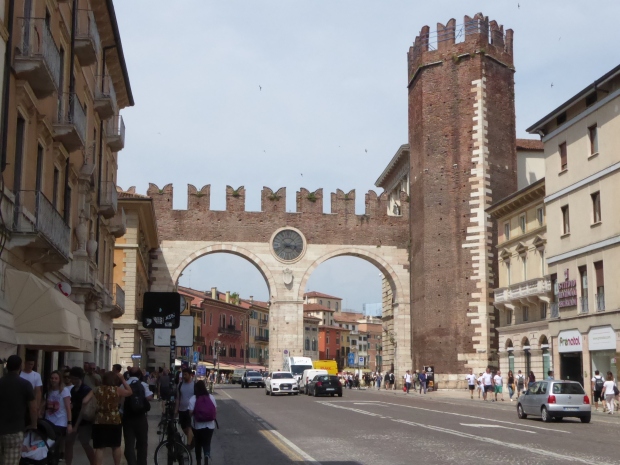 Part of the old city walls, near the Roman Amphitheater. 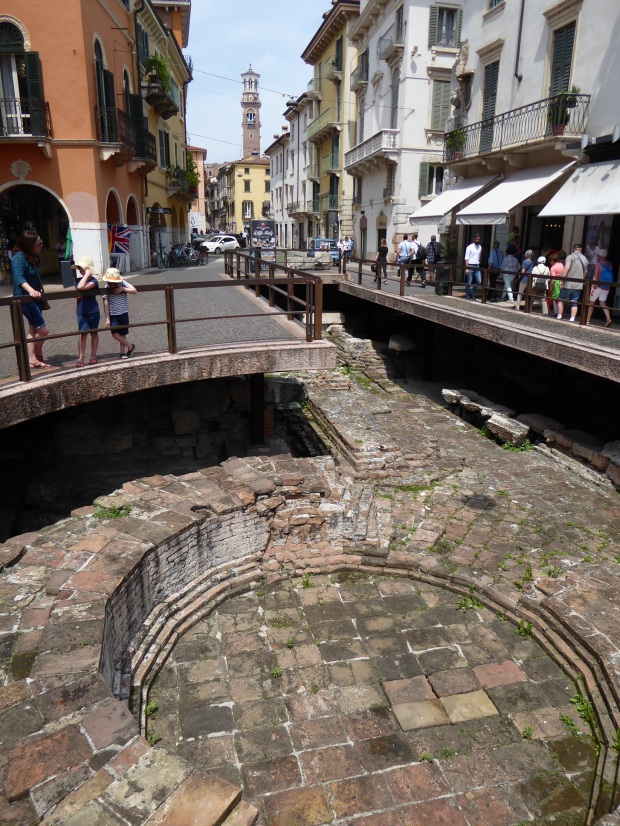 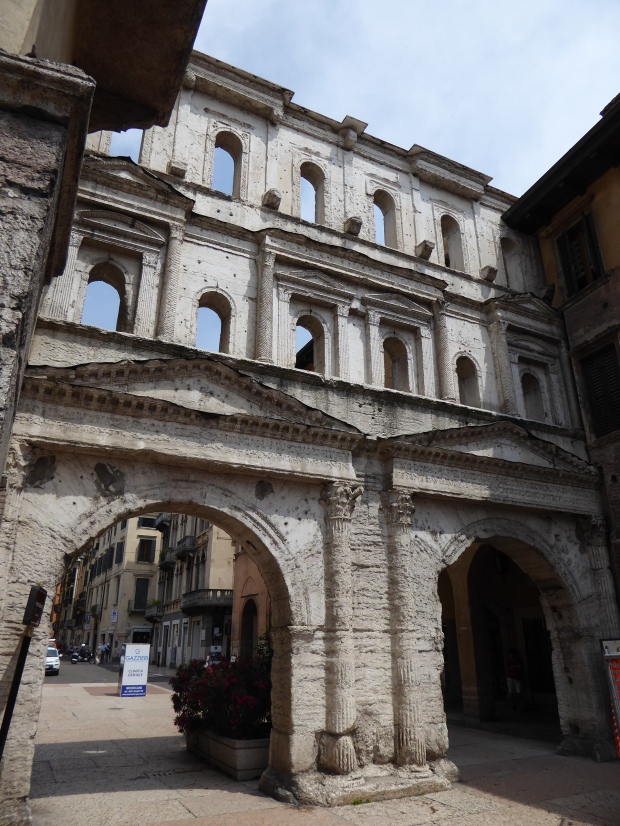 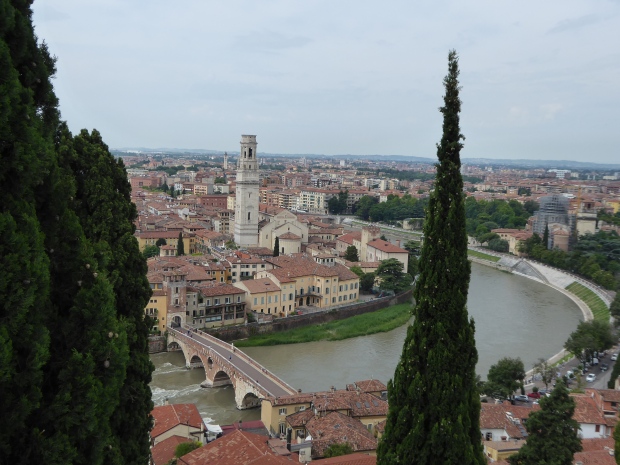 The bridge in the foreground is of Roman origin, it was partially destroyed in World War II and subsequently rebuilt. Verona’s Cathedral (Duomo) stands out with its tower.

It is easy to see why the Romans chose this spot – Verona sits on a u-shaped bend of the Adige River, providing a natural defensive setting, an ample supply of water and a central location that would become a hub for major trade routes across northern Italy, through the Alps and into the rest of Europe. 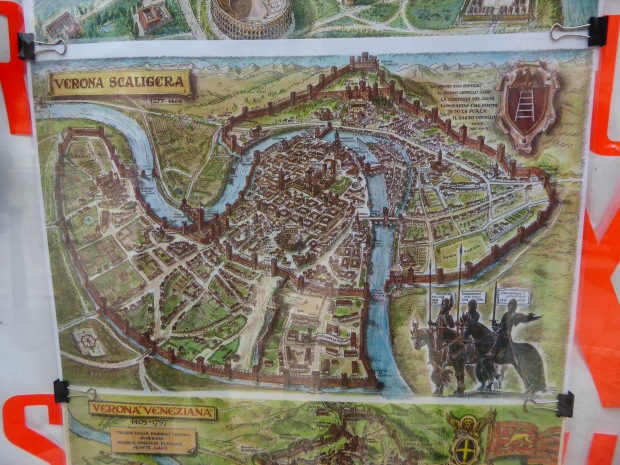 Old map of Verona, showing its defensive position along the Adige River.

The only tourist sight that was crowded in Verona was the (supposed) house of Juliet, with its famous balcony (O Romeo, Romeo, wherefore art thou Romeo?). There is no confirmed link between this building and the story of the two doomed lovers. 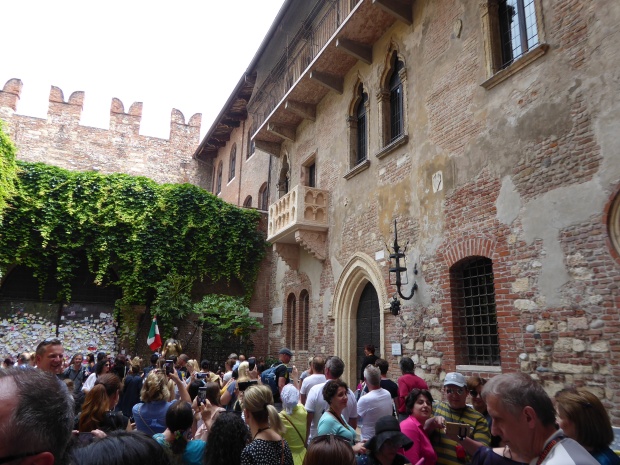 The courtyard of Juliet’s “home” which was a 13th century inn. 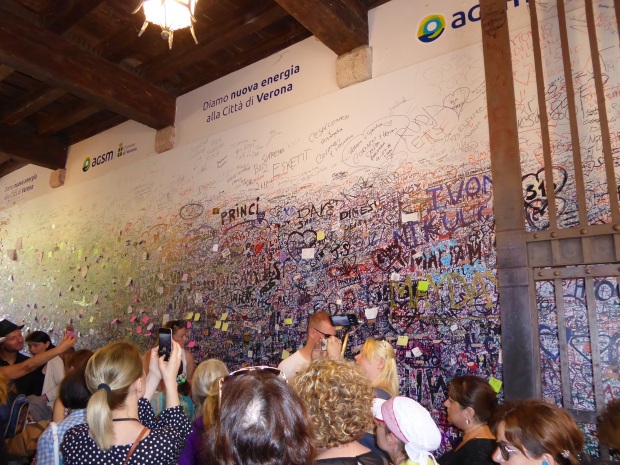 Graffiti on the walls from zillions of tourists passing by, with their stories and symbols of love, leading into Juliet’s courtyard. The panels are changed twice a year to allow more room for memories. The panels keep tourists from writing on Juliet’s house itself.

The rest of this city with its multiple treasures was pretty quiet. In Verona, one can find beautiful piazzas, interesting churches, a castle and huge city walls, along with the magnificent natural setting. 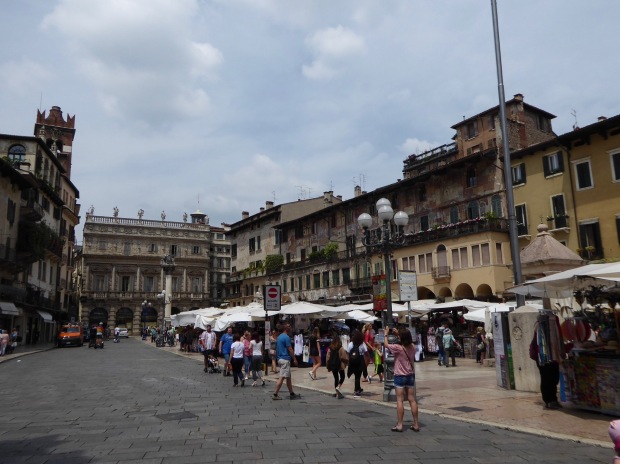 Verona’s Piazza Erbe has been a center of activity going back to Roman times. 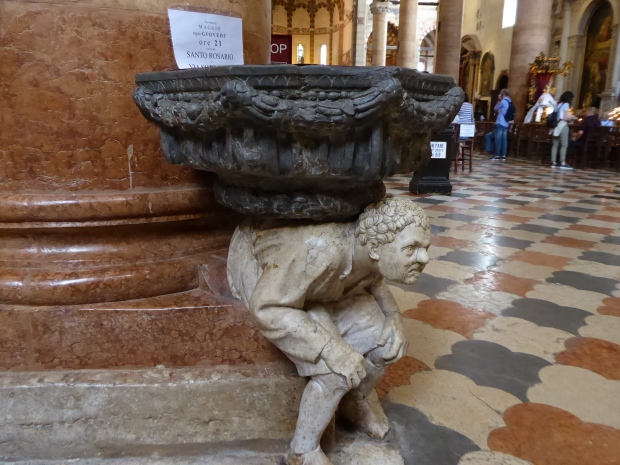 In the 13th century church of Sant’Anastasia we find this beggar figure supporting the holy water stoup, carved in 1495. 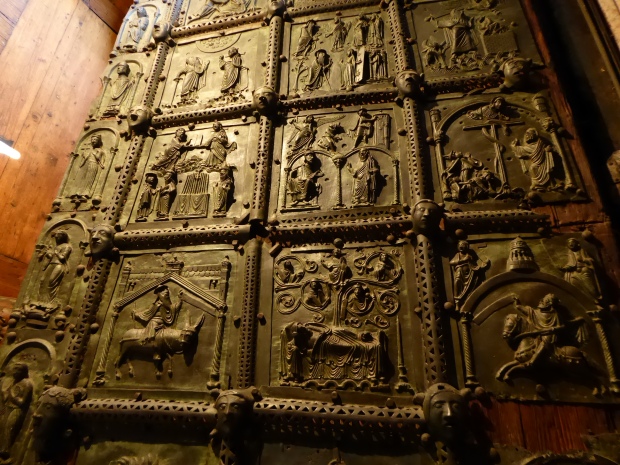 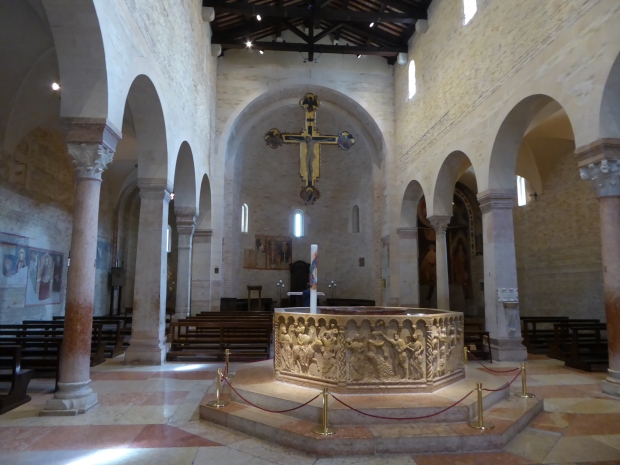 In Verona’s Duomo (cathedral) complex, there is an 8th century baptistry, carved with biblical scenes. 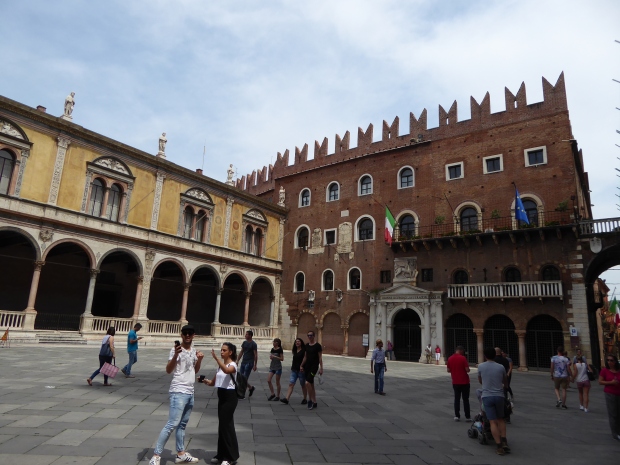 Another of Verona’s Piazzas, Piazza Signori. The crenellated brick building was the 13th century Scaligeri family residence, the ruling aristocrats of Verona. 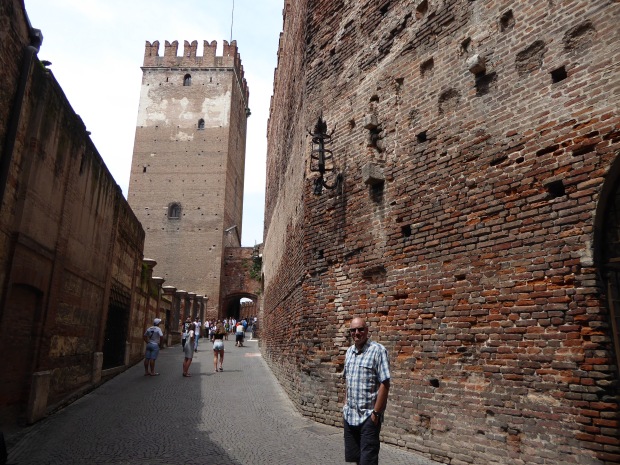 Verona’s medieval castle (Castelvecchio) is now an art museum. At Castelvecchio, a passageway leads to a pedestrian bridge over the Adige River, heading west out of the old city. 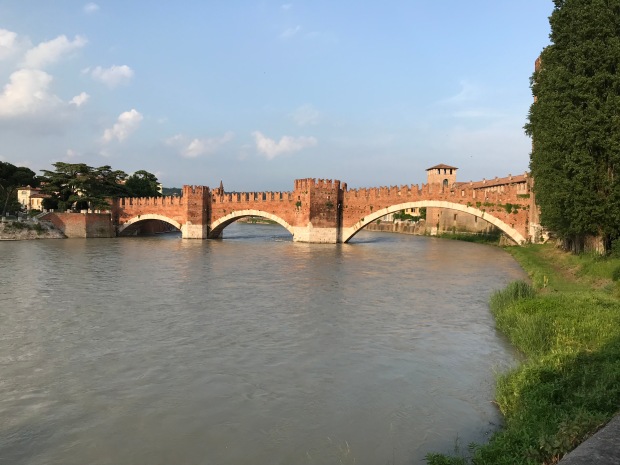 Of course you can find fantastic gelato and even British-like chips (french fries). Just about everything a tourist could want! 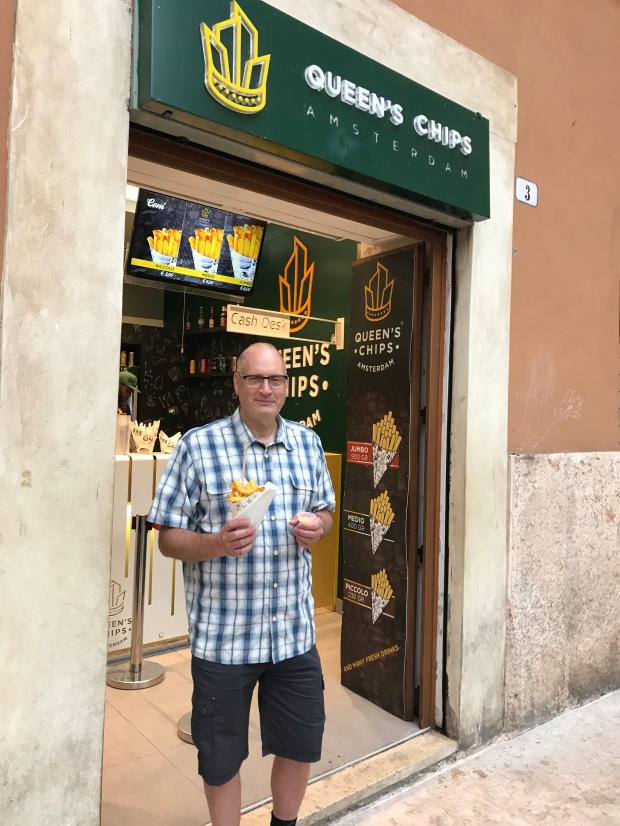 Hard to pass up those almost British chips in Verona!

Finding spots with fewer tourists was part of our quest on this most recent trip to northern Italy. Most tourists concentrate their time in Rome, Florence and Venice, and while I understand why those spots are popular, there is so much more to see in this stunning country. In future posts, I will share some additional less-visited gems, all hiding in plain sight.