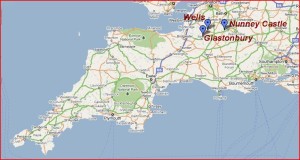 In August 2009, my wife, son, and I finally made it to Southwestern England—the counties of Somerset, Devon and Cornwall. We had wanted to visit this area for a long time. It is a beautiful area of England, but a little “out of the way” since there are no large cities in this region, and it “dead ends” literally at “Lands End.” This part of England is a little less visited by foreign tourists. It is popular summer destination for the British, however, and during August we found the area full of families and caravans (travel trailers) on vacation. In the U.S., most campers stay in State or National Parks. In England, it seems most of the caravan parks are privately owned, and most campers park in fields, or where possible, close to a beach area. As beaches in England go, the southwest has some of the best in England. Even if the temperatures are in the mid 70’s F, you will find locals out on the beach.

Be aware that many of the roads seem even narrower, more like Wales, with many cars pulling trailers that take up more than half the road, some spots are a very tight squeeze! Pull in your side mirrors to keep them from getting broken or scratched by the hedgerows and passing traffic.

The three sites below are all in close proximity, we were able to visit all 3 on the day of our arrival at Heathrow.

Nunney Castle is in the village of Nunney. It’s a smaller castle and is free of charge. It was constructed in the 1370’s for a veteran of the Hundred Years’ War with France. It has a moat around it, and 3 of the 4 outer walls and all four towers are intact. As with most castles in England, it fell victim to Cromwell’s parliamentary forces in the 1600’s, when castles were no match for gunpowder and cannons.

Another view of Nunney Castle

The castle is part of a park in the village, right next to a stream. It is considered a French design, and reminded us a little bit of Bonaguil Castle in France, with the round towers. Learn more here. 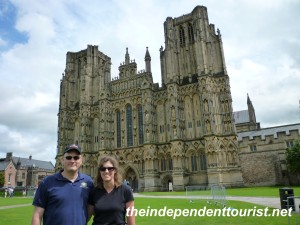 Wells Cathedral. Wells Cathedral (its construction is believed to have begun in the 12th century) is world-renowned for its exterior decorations on the West facade (see picture). There were originally 160 statues in niches on the western facade and towers of which 120 remain (another source says 127 of 176 remain–I did not count!). 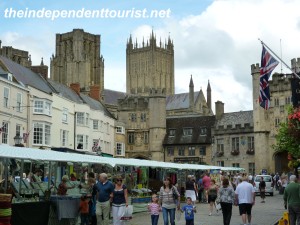 The interior is known for its unusual and innovative inverted arches (making big “X’s” in the transept), to support the weight of the central tower, after the tower showed signs of weakening in the 14th century. Much of the stained glass is original from the 14th century also. Don’t miss the Chapter House and Lady Chapel with their incredible intricate ceiling vaulting. We also enjoyed wandering through the Saturday market in the town square of Wells, right next to the Cathedral.

Glastonbury Abbey. Glastonbury town and abbey are steeped in legend going back to biblical times. This is one of the oldest inhabited sites in England. In the 1100’s, religious sites did everything they could to attract pilgrims, so the rumor spread that this was the burial spot of King Arthur and Guinevere, based on skeletons exhumed on the site. Glastonbury, a Benedictine abbey, was one of the richest monasteries in England and even today, the remaining ruins are beautiful. Unfortunately, much of the abbey’s stone was used by the local people for other buildings after King Henry VIII’s dissolution of the monasteries in the 1500’s. The grounds are well-kept, and there are some other interesting buildings on the site, including a 14th century Abbot’s kitchen.

For a great view of the surrounding area, visit Glastonbury Tor (tower) too. It’s a 15th century tower on a hill overlooking the town. There is almost no parking on the road leading to the tower, so I waited by the car while my wife and son quickly climbed up the hill to the tower.