On our first day in Santorini we decided to hike down to the old harbor, directly below Fira. We walked down the 580 steps. We hired a boat for (€15/person or €70 for the boat) to take us out to Nea Kameni island (the volcano) in the middle of Santorini’s caldera. We were glad we made this little trip. 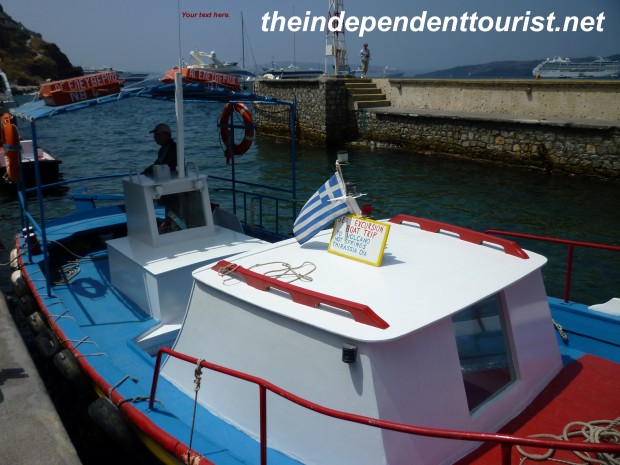 Our boat to Nea Kameni Island.

The trip to Nea Kameni  takes about 25 minutes, and provides nice views of the rim of Santorini, about 1,100 feet nearly straight up from the sea. 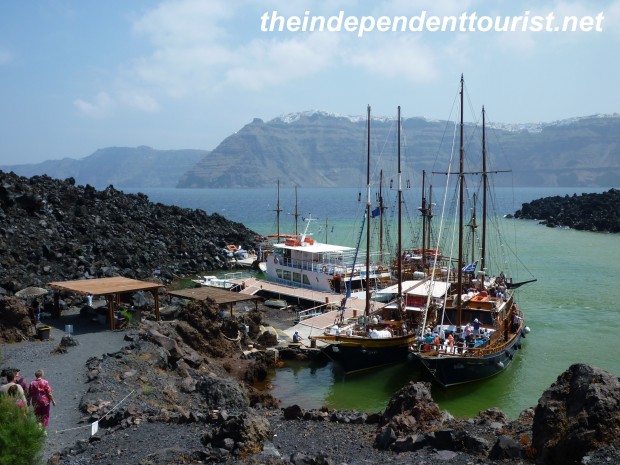 We arrived at the little harbor on Nea Kameni fairly early (around 9:30 am) and had most of the island to ourselves. There is a fee of €2 to hike up to the crater, which takes about 20 minutes. We immediately noticed how barren the landscape is– dark volcanic rock with very little vegetation. It feels like another world. By standing on Nea Kameni island, one gains a perspective on how massive and forceful the volcanic eruption must have been 3,500 years ago to blow about 2/3 of the island into dust!  Santorini has had its share of natural disasters. There were additional eruptions in 198 B.C. and again about 735 A.D. Also, a big earthquake in 1956 leveled Fira and Oia. We enjoyed the great views in all directions, including the little island of Palaia Kameni  just to the west of Nea Kameni—with another extremely rugged landscape. 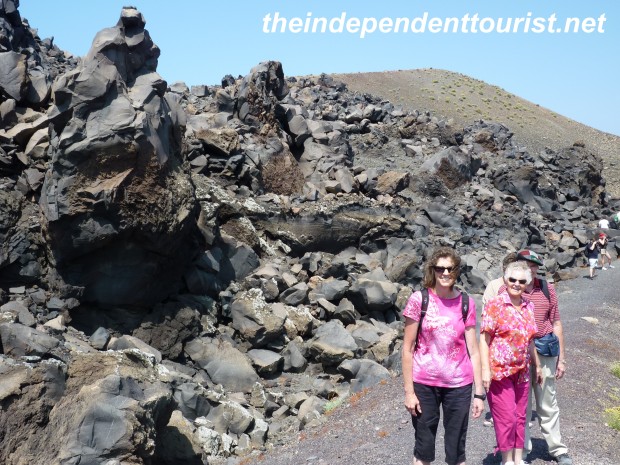 Hiking up to the crater.

What I didn’t realize until our trip was that the volcano is still active. At the top, depending on the wind, you might catch a whiff of sulfur odor.  Along the east edge of the crater, we noticed steam coming out of a hole to the side of the trail, and we could tell it was the source of that lovely sulfur smell. I put my hand in one of the vents and was amazed  at how hot the air was—even 3,500 years after the first explosion. We were hoping another explosion wasn’t in store during our stay. 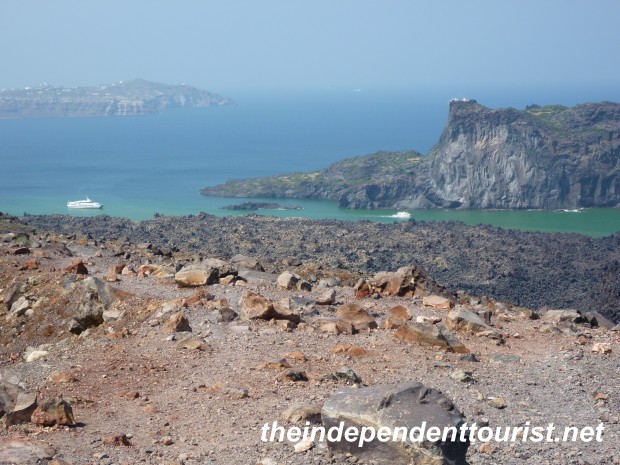 On top of the crater-view of Palaia Kameni in distance.

The ancient Minoans were not so lucky. Their town of Akrotiri on the south side of Santorini was buried by the explosion in 1,500 B.C. and wasn’t excavated until 1967. Interestingly, no human or animal remains were found, suggesting that the population had some sort of warning and escaped in time. Akrotiri is full of artifacts and great frescoes, some of which are now in the museum in Fira. Unfortunately, Akrotiri has been closed to tourists for several years due to the collapse of the huge roof covering the site. Our visit was in May 2011, and we heard it is supposed to open soon, but no date was given, and “soon” has been a term used for quite a while.

There are no services on Nea Kameni, so take some water and wear good sturdy shoes for the walk.