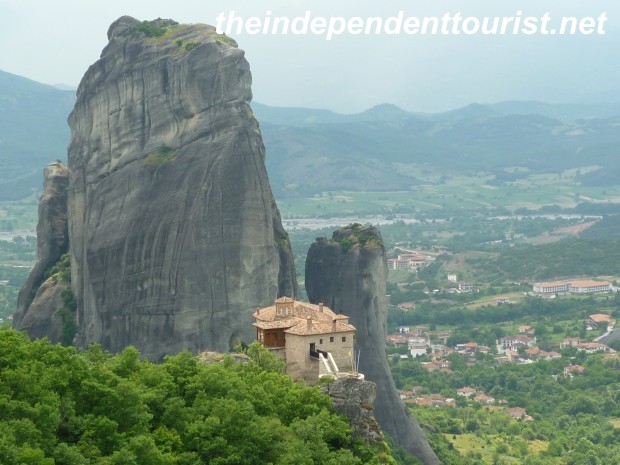 One of the great sights in the world, let alone Greece, is Meteora. The combination of stunning natural scenery—huge sandstone rock pinnacles–with medieval 14th century monasteries sitting on top of them is a sight I will not forget. About 5 hours by car northwest of Athens, Meteora (which is close to the fairly large town of Kalambaka) is well worth the drive, which we did by way of Delphi (about 3.5 hours from Delphi to Meteora). The word Meteora comes from a Greek word which means “to hang in midair” and after seeing this area, it’s easy to see how the word aptly describes the monasteries built on the tops and down the sides of the rocks.

Although the drive from Delphi to Meteora is initially through steep valleys and mountain passes, the mountains give way to a wide fertile valley (the Thessalian plain), which made me wonder what the setting would really be like. As we got close to Kalambaka, the rock pinnacles suddenly appeared in front of us as the gateway to Meteora and the mountains in the area. 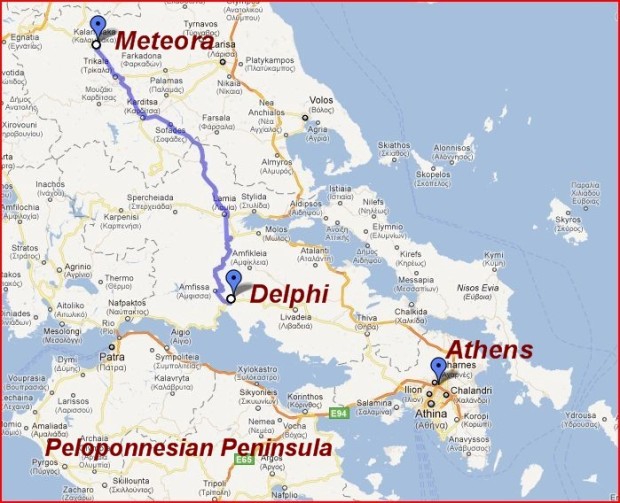 Meteora is about 5 hours northwest of Athens and about 3 hours north of Delphi.

We visited in early June 2011 and the green vegetation of the valley floor and hills is a picturesque contrast with the dark sandstone rock pinnacles. The monasteries of Meteora blend with the surroundings and give the setting a surreal feeling. 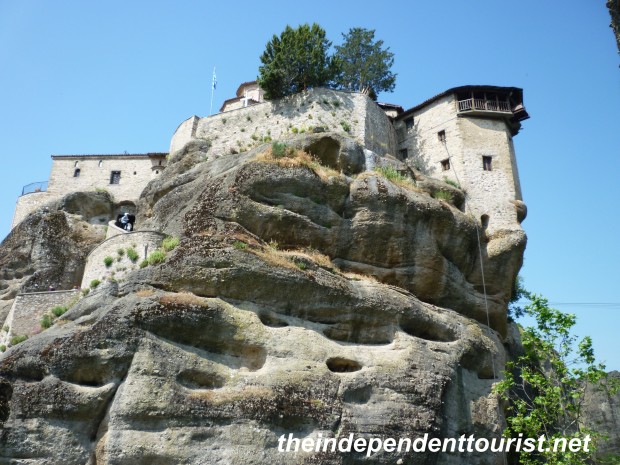 Holy Monastery of Varlaam (looks like it could slide right off the rock!). 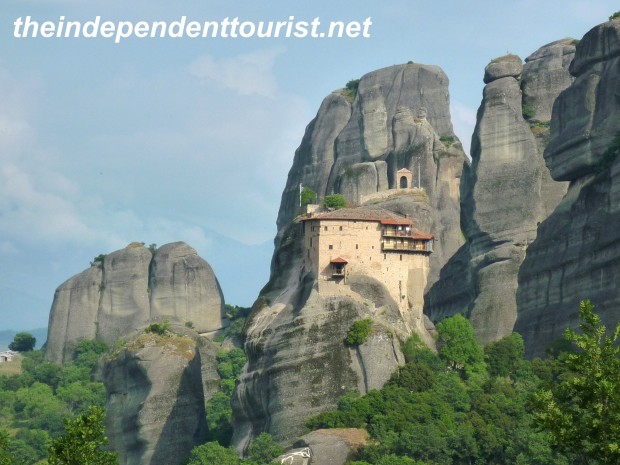 The rock pinnacles served as a retreat for religious orders during the Byzantine–Turkish wars of the 14thcentury. Within 200 years, 13 monasteries were established. Ruins of monasteries no longer standing can still be seen on some rock cliffs. The first monastery, Great Meteoron, was founded by St. Athanasios in the mid 1300’s; he also gave the name to the area, Meteora. Many of the monasteries have highly decorated chapels with frescoes of various biblical scenes. The taking of pictures is not officially allowed in the chapels, but I did take some non-flash video inside several of the chapels.

View of the stairway and windlass tower of Great Meteron. 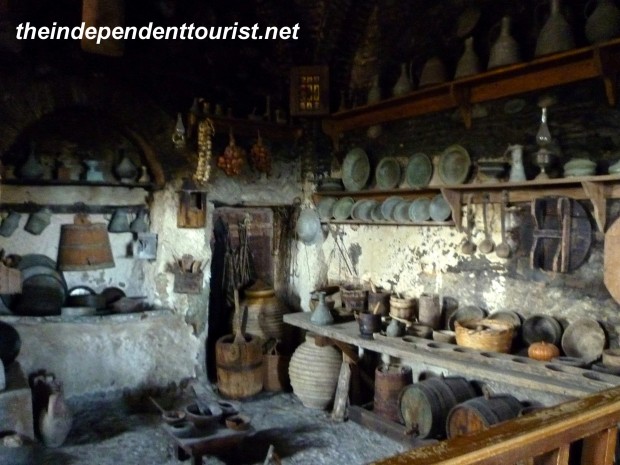 The kitchen at Great Meteron (dated around 1557).

The Ossuary at Great Meteron.

Other features vary depending on the monastery—some have beautiful gardens and views. The largest, Great Meteoron, is almost a museum–with an old (dates from 1557) kitchen, Ossuary, and equipment storage rooms on display. The monasteries are in close proximity, but since some walking or hiking is required, at least 60-90 minutes per monastery is a good estimate.

All monasteries can be visited in one full day, especially if you are staying in Kastraki or Kalambaka. We recommend Kastraki as a base, since it is so close to Meteora. A car is the easiest way to visit the monasteries, and allows you the freedom to arrive and leave at your leisure. There are also footpaths among the ravines, connecting the towns with the monasteries and if you have the time, they would be a lovely way to see the area. 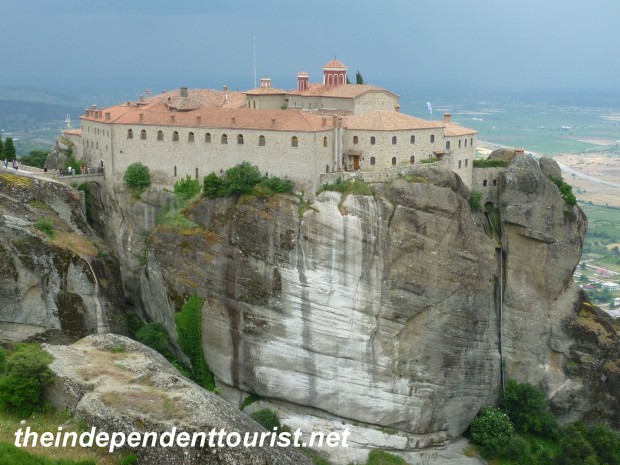 Holy Monastery of St. Stephen is the most easily accessible.

Each monastery has a €2 entry fee per person.  Be prepared for stairs, and lots of them. One of the monasteries, St. Stephen’s, (actually a convent) is easily accessible from the car park and does not require stair climbing. Others require a hike down and up steep stairways. In the old days windlasses with nets or baskets were the only way up into the monasteries–ensuring safety during times of war.

The busiest monasteries are Great Meteron (aka Moni Megalo Meteoro or Monastery of the Transfiguration), St. Stephen’s, and to a lesser extent Varlaam. Be prepared for tour buses at Great Meteron.  We had the Holy Trinity and St. Anapafsas monasteries to ourselves.

As usual, getting to the monasteries earlier (or later) in the day will help in avoiding the crowds.  Check opening days and hours carefully. We visited on a Saturday and all of them were open, but some are closed other days of the week.  Most open at 9 am. There are small parking lots at each of the stairway trails to the monasteries.

The monasteries are picky about dress.  They require women to wear dresses or skirts, although they have free wrap-around skirts available at the entrances. For men, shorts are not officially allowed, but we did see men in shorts at several of the monasteries. To avoid any hassle, men should wear long pants. Also, men, don’t try to wear the skirt wraps—the monks don’t appreciate this!

We stayed in Kastraki, a small village just a couple of kilometers up the road from Kalambaka, it’s nestled among the rock pinnacles, with a great view. Our hotel, Doupiani House, was in a perfect location with many rooms having a balcony view of the rocks of Meteora.