On our last day in Ireland we visited the scenic Glendalough monastery ruins and Dublin.

Glendalough is 58 kilometers south of Dublin. It is an early Christian monastic site found by St. Kevin in the 6th century. It sits in a beautiful valley with two lakes. The historic ruins include a round tower, stone churches and decorated crosses; most of the buildings date from the 8th to the 12th centuries. Although attacked by the Vikings and English over the centuries, this site survived until the Dissolution of the Monasteries by King Henry VIII in 1539. Since our time was limited, we visited only the lower ruins (near the Lower Lake) and did not make it to the Upper Lake and few remaining ruins there. We enjoyed the beautiful natural setting as well as the historic aspects. Glendalough is part of the Heritage Ireland system. For a map of these locations click here. 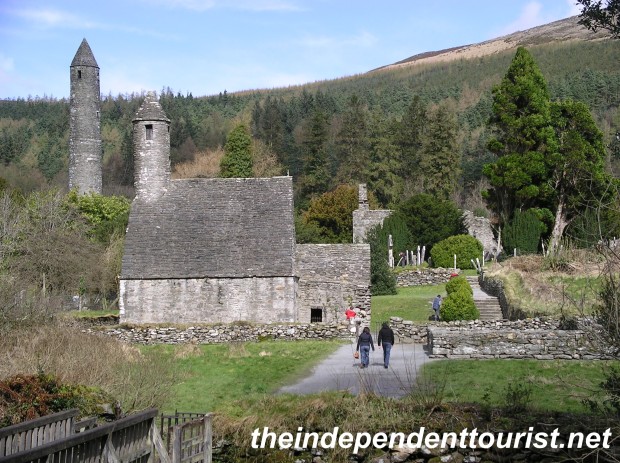 St. Kevin’s Kitchen (11th century) and round tower at Glendalough.

The Cathedral and graveyard at Glendalough.

We then drove north to Dublin, and tried to make the most of our short time there (we had an unplanned overnight stop in Graiguenamanagh due to a rental car breakdown). Dublin is located on the east coast of Ireland (almost directly west of northern Wales), and the River Liffey goes through the heart of town west to east, not unlike the River Thames in London. I would not call Dublin a beautiful city like Paris, but it definitely has its own character, and interesting neighborhoods. Many of the historical sights are on the south side of the river.

Our main interest was seeing the Book of Kells, housed at Trinity College (on the south side of the River Liffey). Trinity College was founded by Queen Elizabeth I in 1592. The Book of Kells is a richly decorated artistic masterpiece. The manuscript (680 pages) dates from about 806 AD and contains the Four Gospels of the New Testament. It is considered the most important piece of art from the Dark Ages. The Book is kept in a small room in the Treasury of the Library at the University under special glass and lighting to preserve this marvelous work. Next to the Treasury is the Old Library—a 210 ft. long room built in 1732 which contains 200,000 texts on two levels. Unfortunately I could not get pictures of either of these gems. 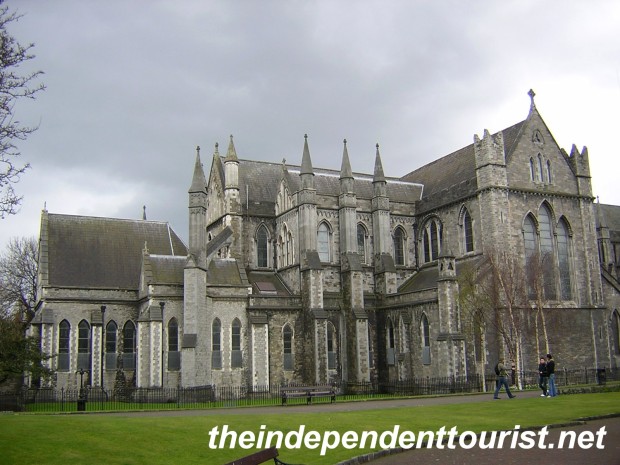 This cathedral of the Church of Ireland dates from 1186, but was heavily restored in the 1870’s. Lots of interesting historical features, including a huge crypt.