We just completed a great vacation to Romania. Most of our friends were asking “Why are you going to Romania? “or even “Where is Romania?” Admittedly, Romania is not the first place one usually thinks of for a European vacation, but that’s because many people don’t know what the country has to offer rather than it not being a good place to go. We flew into Bucharest and traveled north to Transylvania, where we made a loop for about 9 days. This part of Romania has beautiful snow-capped mountains, with green valleys and thick forests, fantastic little villages with fortified churches (which are unique to Transylvania), great castles and medieval towns. We visited in May, and ran into very few tourists in most locations. 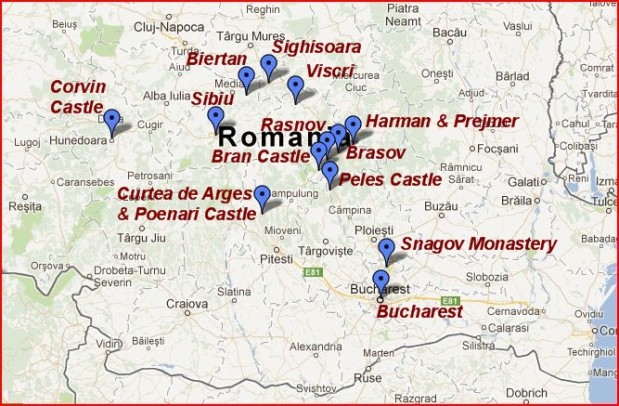 Central Romania and the main sites we visited. Transylvania is in the heart of Romania, north and northwest of Bucharest.

The Transylvanian countryside of Romania

The fortress and town of Rupea in Transylvania.

Romania is in a time warp; modern cars are zipping by on roads, passing horse-drawn carts carrying families into the village or hay to the barn. We saw some folks sitting in their horse-drawn cart talking on a cell phone! It is an agricultural society, with huge fields being planted by hand, and horse-drawn plows tilling the fields. And then you have the ugly years of communist rule under Ceauşescu, and a number of burnt-out old factories blighting some of the towns, but luckily these do no mar most of the historic sights. 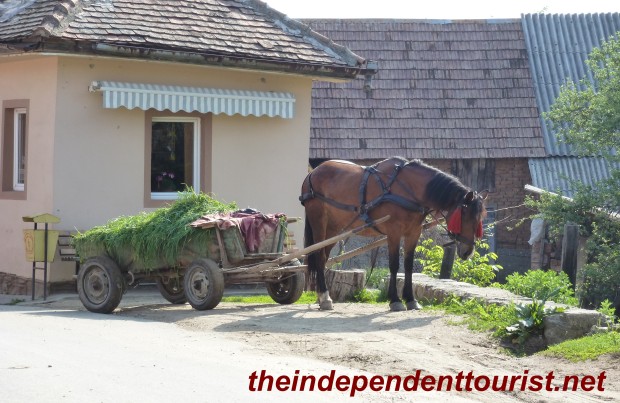 Women on their way to their fields – working the land is a family affair.

Here are a few things to know if you’re considering this country as a vacation destination. In future posts we’ll describe in more detail the sites we visited.

Cost. Go now. Romania is quite cheap compared to Western Europe. It is not yet on the Euro which keeps costs more reasonable. The cost of gasoline is on par with Western Europe, but accommodations are much less (most rooms were an average of about 35 Euros per room, which is about 1/3 of what you would pay in Western Europe). Food was another bargain; a good meal in a nice restaurant for 3 people was typically around US $35 total, not including alcohol. Entry fees to most sites were $2-3, with a few exceptions.

Roads.  We rented a car, which is the best way to get around, since many of the interesting sights are in little towns. Our guidebooks warned us about the roads, and yet we found most of them to be in good or better condition. Yes, there were a few roads with numerous potholes and lots of patches, but those were really pretty rare, even on the small backcountry roads. Some roads to little villages are still dirt or gravel, or a combination of gravel and some pavement. It was not uncommon for many village roads to be dirt. Everything is well sign posted. We never bought a map and just followed road signs and used Google maps on our iPhone for some directions (although we did discover Google hadn’t mapped some little villages). I found Romanian drivers to be similar to other places in Europe–driving pretty fast, but also highly alert and reasonably patient. I would say they were actually less crazy than places like Italy.

A dirt/gravel road in the village of Viscri, Transylvania, Romania.

Our rental car in Romania.

B&B’s. We found our accommodations through Booking.com. There are not many large hotels, especially in the smaller towns. Our rooms were clean, many were recently remodeled, with good showers and decent beds. Every place we stayed had free wireless internet, a very handy feature.

Our B&B in Horezu, Romania 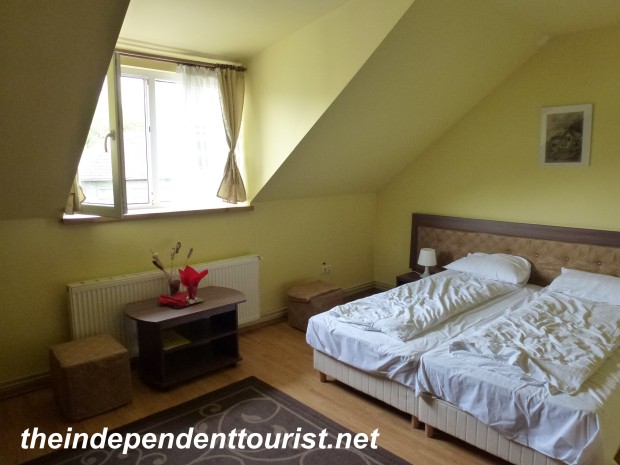 Inside our B&B room in Brasov.

Food. Another thing we’d correct about our guidebooks (Lonely Planet and Rough Guide) is regarding the food. The books did not rave about most of the food dishes, and yet we thought the local cuisine was very good; many high quality meats served with savory sauces, good salads and soups. Good pizzas and pastas are also available. As mentioned above, you can eat a very well for about $10 per person per meal. 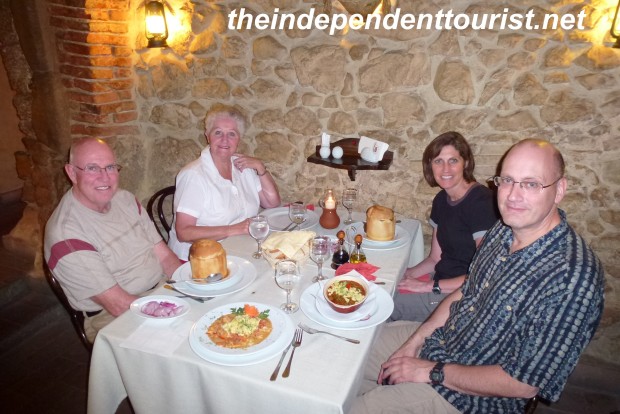 One of our many excellent meals in Romania. (those are bread bowls with tasty soup inside!)