Transylvania contains a number of fortified towns, and Braşov is a great example. The fortifications were begun in 1203 and constructed by the Saxons (Germans) as defenses against the Ottoman Empire. Local Romanians were actually forced to live outside the main town. Some of the old town’s walls, towers and gates remain. Located about 170 km north of Bucharest, Braşov is a great place to call home for a few days to explore this part of Transylvania. We spent 3 nights in Braşov and were able to explore the old town of Braşov and Peleş Castle (about 50 km south of Braşov) on our first day, Bran Castle and Raşnov Fortress on the 2nd day, and Harman and Prejmer fortified churches on our way out of town on the 3rd day. For a map of our tour of Romania, click here.

The old town of Braşov is set against Mt. Tampa on the south. The path around the outside of the walls on this side of the city is shaded and a favorite place for locals to stroll on Sundays. There is a Hollywood-like sign on the mountain (“Braşov”). If you want to get  a great view of Braşov and the surrounding countryside, take the tram up Mt. Tampa, located outside the old walls. At the top of the mountain, follow the trail to the west (or right) towards the Braşov sign for an overlook of the old town and surrounding area. The tram costs about $6 round trip. Another option is to take the tram up and walk the trail back down.

View of Braşov and surrounding area from Mount Tampa. The old city of Braşov is in the lower right (the Black Church and the main square are visible).

The old city is well-preserved with a number of interesting streets and buildings.  It is a very lively town, with many people enjoying the outdoors on the plaza and open air cafes.

The pedestrian street of Strada Republicii, looking towards the Black Church. It’s lined with cafes and a great place to spend a summer evening.

The main square is the heart of old Braşov, and has an interesting history.  Some claim the Town Council building is haunted, and given its bloody history, maybe there is a good reason!

The Piata Sfatului, with the council house (built in 1420), and Trumpeter’s Tower, where many tortures took place. This square was apparently the site of the last witch burning in Europe.

The Black Church along with the Council House are the main landmarks in old Braşov. The Black Church is the largest Gothic church between Vienna and Istanbul. Construction on the church started in 1383 and lasted almost 100 years. It received its name after a huge fire that blackened its walls and swept through the town in 1689.  It has a 4,000 pipe organ and many Turkish rugs hanging from the balconies, which were gifts from merchants–not something you see everyday in old churches. 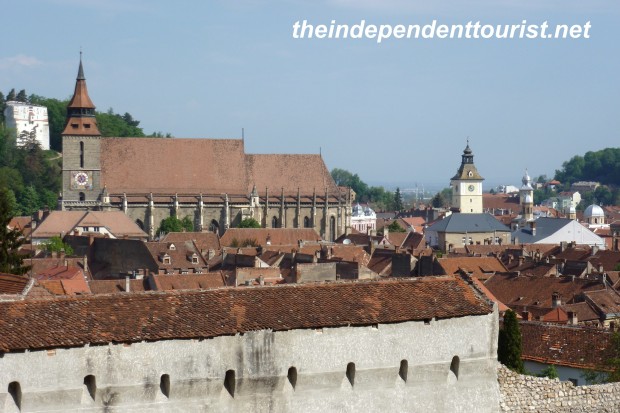 The old city of Braşov. The Black Church is center-left, while the city walls are in the foreground, and Trumpeter’s Tower is center-right.

Sforii (Rope) Street. The narrowest street in Braşov and one of the narrowest in Europe (1.32 meters wide and 83 meters long).

The old city retains some of its original fortifications, with a number of towers and some remaining walls.  The outline of the old city can clearly be seen from Mt. Tampa and also there are old drawings of the city in the Black Church. There are several towers outside the city walls which provided early warning in case of attack.

The Weaver’s Bastion is the best preserved of the city’s fortifications; it sits at the southwest corner of the old city walls. Construction began in 1421. The walkway to the tram up Mt. Tampa is located near to this Bastion.

City gates. There are a few remaining gates to the old city, and one of the most scenic is Catherine’s gate.

Catherine’s Gate retains its original appearance and was a main entrance to Braşov from the Schei District. Outside the city walls was a large moat, which was drained just in the 1800’s.

This is where the locals lived, while the Saxons lived in the fortified city.  We took a walk through this section of town, which also has interesting churches and squares.

St. Nicholas Stone Church (a cathedral) built in 1495, is in the Schei district to the southwest of the old city. This church has great wall paintings from the 1700’s.