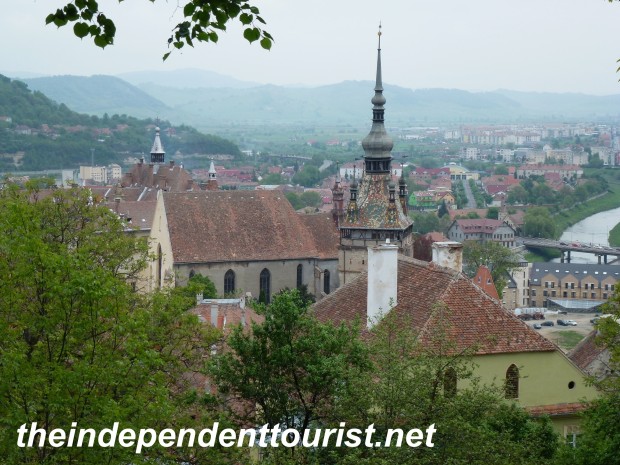 A view of Sighişoara and surrounding countryside.

Sighişoara is the best-preserved medieval city in Transylvania. Vlad “The Impaler” Ţepeş (“Dracula”) was born here in 1431, his father being “Vlad Dracul,” a member of the “Order of the Dragon.”  For a map of locations we visited in Romania, click here. 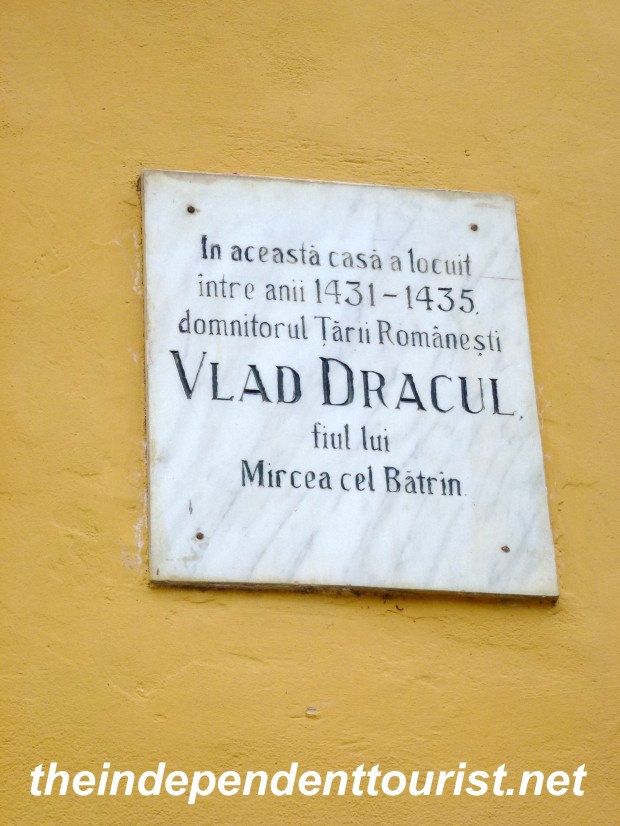 The plaque on Vlad Dracul’s home, the birthplace of Vlad “The Impaler” Ţepeş. 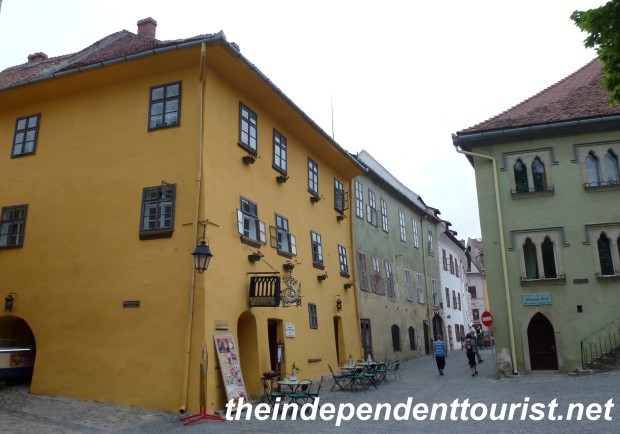 Vlad “The Impaler” Ţepeş birthplace, the yellow house on the left.

The origins of the town date back to Roman times, and German Saxons moved here during the 12th century, being promised autonomy in return for defending Transylvania from the Ottomans. About 500 Germans still live here. The towers (9 of them remain) and walls surrounding the old town are from the 14th and 15thcenturies. You can walk around the old town in less than an hour, although there are some interesting museums and churches to visit also. We enjoyed exploring the old narrow lanes and towers. This town has the perfect look for a “Dracula” movie. 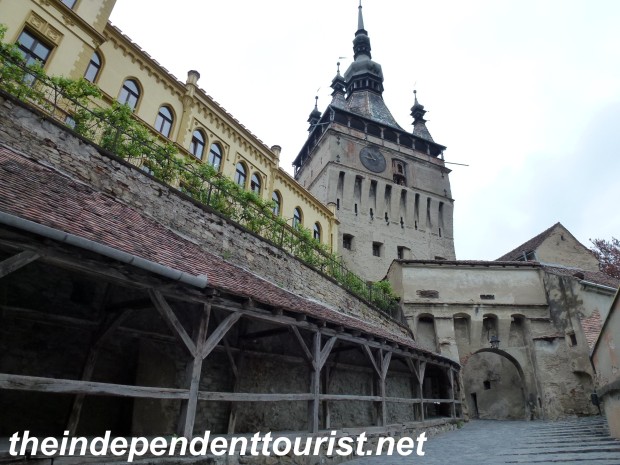 The main entrance to the old citadel of Sighişoara, under the Clock Tower built in the 14th century.

In medieval times, Sighişoara was in a good location for defensive purposes, situated on a hill surrounded the Târnava Mare river, and between the cities of Braşov and Sibiu. When the town came under siege, the alarm was given by a big bell.  Everyone had a specific duty to contribute to the protection of the town, based on their training over the years. The craftsmen would fight from the fortress walls and towers, the women and children would prepare hot water and pitch which they would throw upon the heads of the attackers, the old men would give advice and the old women would take care of the wounded. Each guild had a tower that it built and defended. 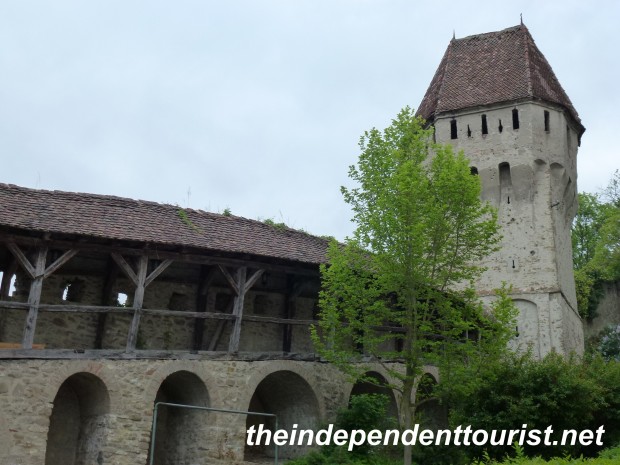 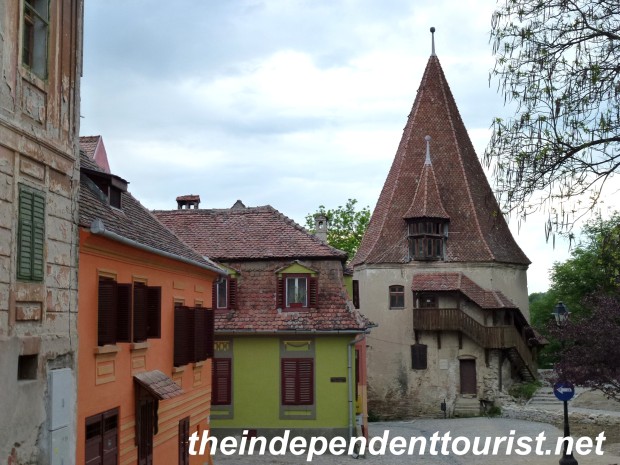 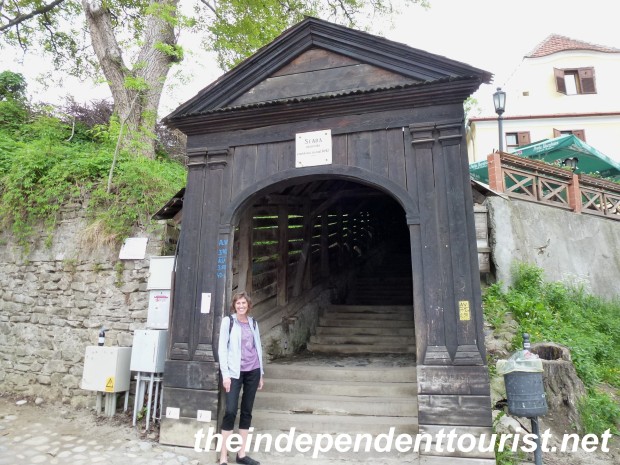 Built in 1666, The Covered Staircase has 173 steps leading up to a school and the 13th century “Church on the hill.”

Practicalities. We stayed in a small pension just outside the old citadel, called Pensiune Citadela Sighişoara, which can be found on booking.com. 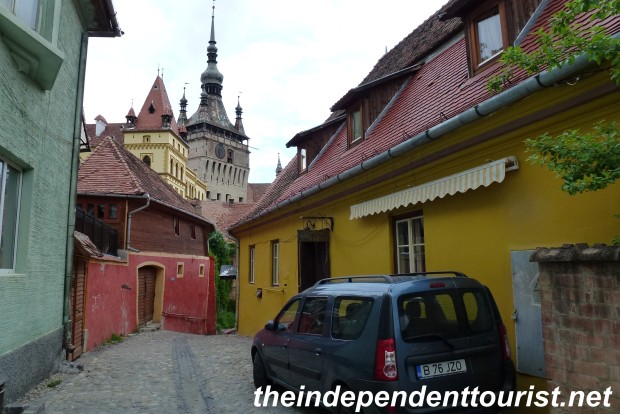 This pension was in an excellent location and had decent rooms with exposed old wooden beams, which gave our accomodation a medieval feel. There is a tourist information office just across the street from Vlad Ţepeş’ home (now a restaurant). We ate a very good dinner at the “Stag House” or Casa cu Cerb, just a hundred feet from Vlad Ţepeş’s home, which is also a hotel. Prince Charles of the United Kingdom stayed here in 2002. 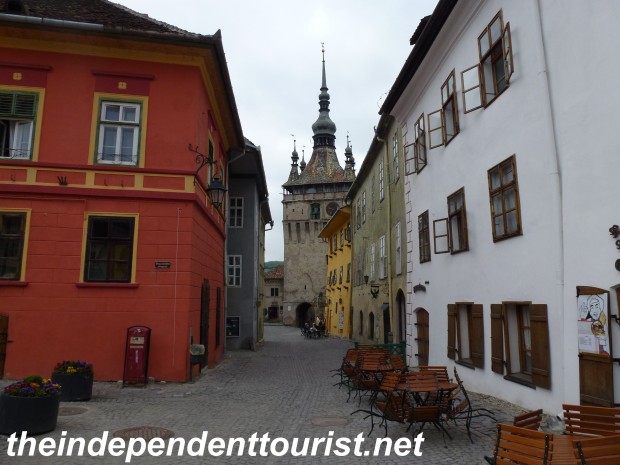 The Casa cu Cerb (hotel and restaurant) is the white building on the right.

The Piaţa Cetăţii is the geographical center of the town, and is the citadel’s main thoroughfare.  The first homes were built around this square. 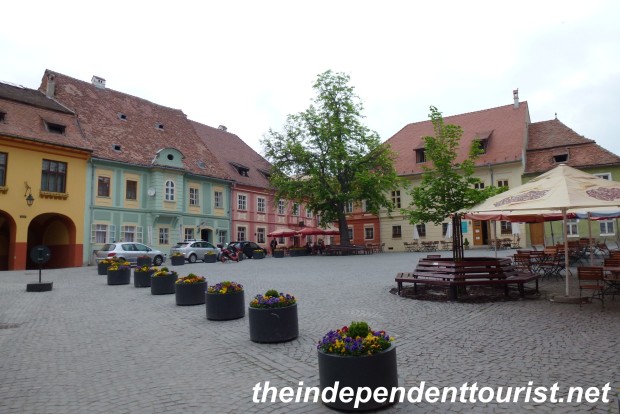