The theater at Hierapolis could seat 20,000.

Put these sights on your “don’t miss” list in Turkey. The combination of the ruins of Hierapolis and the terraces of Pamukkale, famous for the brilliant white travertine pools make this an unforgettable destination. Hierapolis was founded in 190 BC and became part of the Roman Empire in 133 BC. Later on it was part of the Byzantine Empire and eventually faded into obscurity in the 6th century. Among other things, it was a spa town known for its thermal baths, and the warm water still runs here.

The northern gate to Hierapolis.

An elevated tomb at the extensive necropolis of Hierapolis. 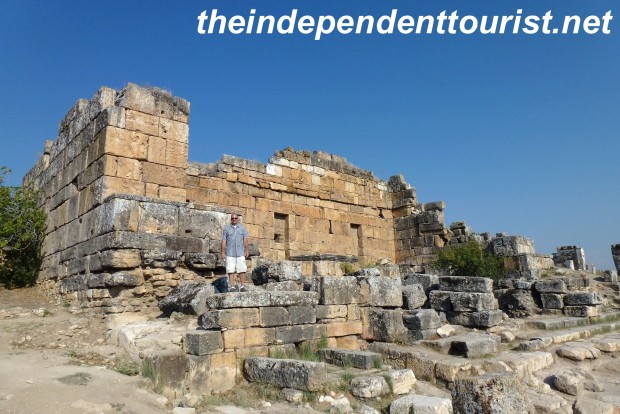 The Nymphaeum – in ancient times there would have been fountains everywhere on this structure. This is near Pluto’s Gate.

The “Gate to Hell” reference applies to a spot on the site known as Pluto’s Gate (Pluto was a deity of the underworld), and the lethal vapors bubbling up from the waters running underneath the city were used to sacrifice animals as part of sacred pagan rites, with hallucinating priests performing the ceremonies (not unlike Delphi in Greece). This spot was undergoing excavation during our visit in 2012, and a recent article confirms this historical reference. Also, it’s believed that the apostle Philip met his death here (by stoning and crucifixion) in AD 80. 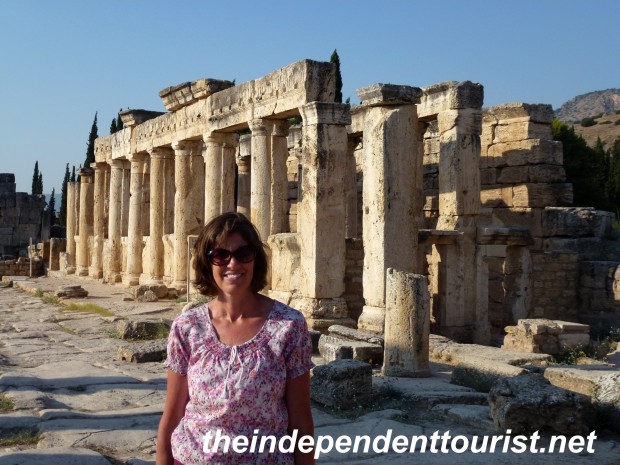 Swim in the warm waters among the ruins.

You can swim among the ruins, and this water is the basis for the white travertine terraces, which are just at the edge of the ancient city on a ridge overlooking the town. Pamukkale means “cotton castle” which is an apt description as you gaze at the terraces from below. The travertine terraces are formed from white limestone residue as the carbon dioxide escapes the water.

Where the ruins and travertine meet – this tomb is half-buried by the travertine residue.

Some of the travertine terraces at Pamukkale.

The setting sun reflecting on the travertine pools.

Also fairly close to these sights are the ruins of Aphrodisias, which I will cover in a separate post.