Just about 2 ½ hours by car (155 km) from Bucharest are two very interesting churches, located in the town of Curtea de Argeş. Curtea de Argeş is the gateway to Poienari Castle (about 25 km north) and the Făgăraş Mountains (the Transylvanian Alps). One church, called the St. Nicholas Princely Court Church is the “oldest monument preserved in its original form in Wallachia” (this region of Romania) and the other is the Curtea de Argeş Monastery, a small “Taj – Mahal” like church (ok, not quite the Taj Mahal, but its exterior is still an example of amazing marble work) where the kings of modern Romania are buried.

The beautiful marble exterior of the Curtea de Arges Monastery.

Curtea de Argeş was the seat of Romanian princes of Wallachia, and hence the name of this church. If you are a student of Byzantine religious history and artwork, St. Nicholas Princely Church is on your must-do list, it is one of the most important ecclesiastical buildings of its time. Completed in the 14th century (1340-1352), it has intact Byzantine frescoes from 1364-1369. A very nice gentleman gave us an impromptu tour—the church had just closed and he reopened it for us, he was a wealth of knowledge. The style of frescoes in this church is a mix of Italian and Byzantine influences, and many important priceless artifacts were found in the 14 tombs (buried on the church grounds) of the local ruling class, which are now in museums in Bucharest. The church is in the shape of Greek cross. There was a fee of 6 lei per person (about $2 USD).

A view of the highly decorated interior of St. Nicholas Church. 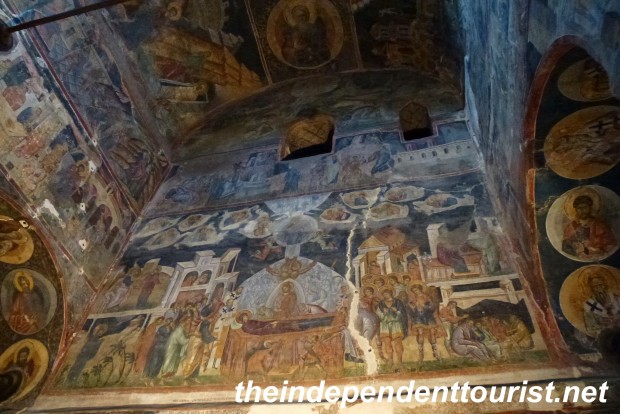 The frescoed wall above the church entrance.

It may be hard to tell, but this is looking straight up at the cupola of the church.

This monastery was originally built 1512 – 1521, with marble from Constantinople (Istanbul). Legend has it that the master stonemason’s wife is buried within the walls; it was a local custom that the mason had to bury a loved one alive in the church to ensure the success of his work, since ghosts were believed to keep buildings from collapsing. If you built many structures, you might run out of loved ones to bury—what a sad tale. The monastery had to be largely rebuilt in 1875, after years of neglect.

A view of the exterior of the Curtea de Arges Monastery.

An interior view of the monastery.

Another view of the interior of the monastery.

The church contains royal tombs–two kings and queens tombs lie here, King Carol (the first king of Romania) and his wife Elizabeth (the builders of the incredible Peleş Castle), and King Ferdinand and Queen Marie (granddaughter of Queen Victoria of England).  It was difficult to get photos in this church due to restrictions. The monastery is free.