After two weeks touring the dusty ancient ruins of Egypt, we felt like we had traveled to a different planet when we arrived at the Sharm el-Sheikh Airport from Luxor. While both airports are modern, the minute you step outside in Sharm el-Sheikh you notice the difference – the more humid air, and the end of bargains. The taxi drivers wanted E£ 200 (at the time about $40 USD) for a 2-3 mile ride to our hotel that would have cost E£ 15-20 in other parts of the country, and they would rather walk away than bargain.

My sister on Na’ama Bay beach.

Lots of water toys available for rent in Na’ama Bay.

We stayed at the Hilton Hotel in Na’ama Bay (a bit more resort-like and next door to the larger town of Sharm el Sheikh) which felt more like Cancun than Egypt – a promenade with lots of restaurants, posh hotels and tourists—especially from Russia.

The promenade at Na’ama Bay – lined with restuarants and shops.

Even though it’s more of a cushy resort area, nice hotels can be had for about $50 US per night.

One of the nine pools at the Hilton Sharm Dreams Resort. Great hotel.

This is a divers’ paradise. The Red Sea has some of the best diving in the world. Lots of tour companies will take you out for day trips to the reefs and shipwrecks. Unfortunately we’re not divers, but we did enjoy snorkeling. My sister and her husband took a glass-bottom boat tour. 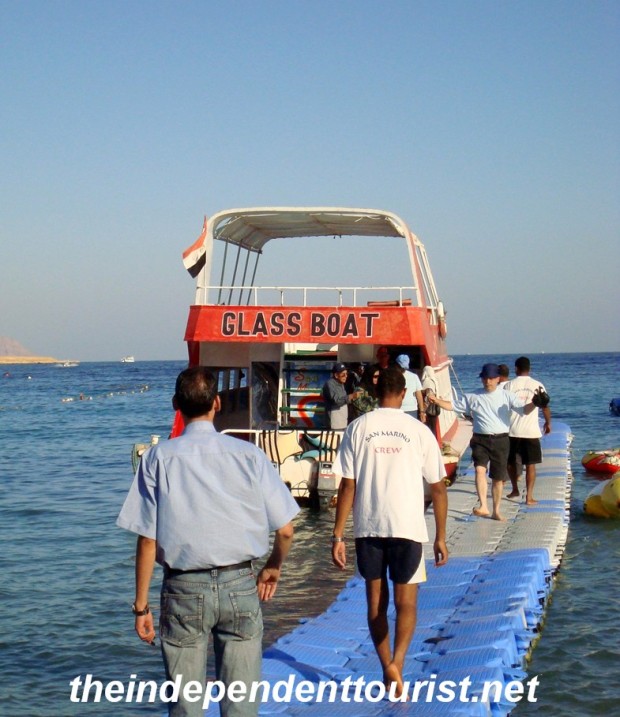 One of the glass bottom boat tours available in Na’ama Bay.

The water is incredibly clear and full of life, with unique coral formations and marine species not found elsewhere on the planet. We took a taxi out to Ras Mohammed National Park and did some snorkeling from the beach. Lots of dive boats were just off shore; this is one of the best spots in the Red Sea.

One of the coral walls that goes straight down into the depths at Ras Mohammed National Park.

Sharm el-Sheikh was claimed by Israel after the 1967 war (it was returned to Egypt in 1982 and that is when development took off), and it experienced some terrorist activity about 10 years ago. However, it is probably one of the safest tourist spots in Egypt now. There are security barriers and guards at the entrance to the town. Your car may be checked, but this is for your protection as a tourist.

A view of the shore heading back to Na’ama Bay from Ras Mohammed National Park.

It would be a huge mistake to visit Egypt and not go to the Sinai. We also climbed Mt. Sinai (think Moses and the 10 Commandments) and I will discuss that day trip in a separate post.