On our way north from Nazaré to Porto we stopped at the site of a Roman settlement in Portugal, known as Conimbriga, which is about halfway between those two cities (roughly 110 km or 68 miles either way). The history of Conimbriga actually dates back well before the Romans, to the Bronze and Iron ages. It was an ideal location, on a plateau that was easy to defend and good access to water.

What remains are the Roman-era ruins, of which 17% have been excavated, leaving a lot more to discover. The visible ruins date from about mid 1st century CE to about 500 CE, when the Roman empire finally completely collapsed. Although most of the structures are pretty ruined, enough remains to get a feel for the wealth and prosperity of Conimbriga in its prime. 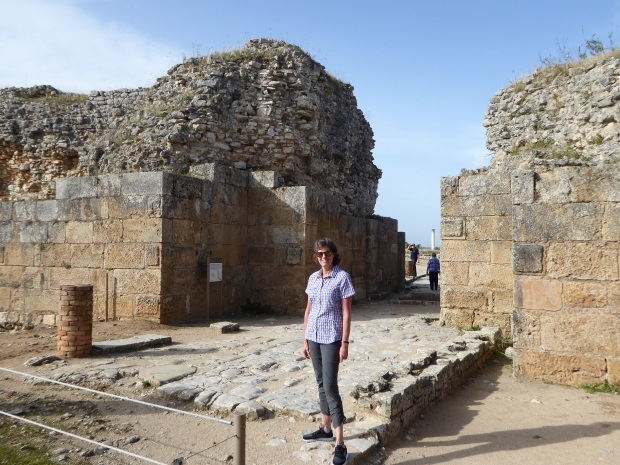 The gate and road into Conimbriga. The original city walls were smaller and encircled a much wider area. The town’s fortifications were strengthened around a smaller portion of the city in the 3rd century CE. 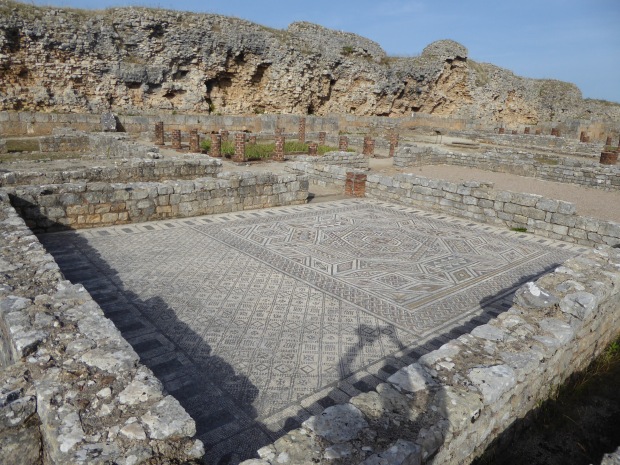 These structures, which include shops, baths and houses, are just outside the town’s walls, which form the backdrop.

The largest aristocratic residence, known as the House of Fountains, sits just outside the walls. It was constructed around 200 CE and excavated in 1939. It has a huge courtyard (or peristyle) with pools, fountains and beautiful mosaic floors in its rooms. Unfortunately, it was largely demolished when the defenses of the town were strengthened and building material was needed. The remnants of this 35,000 sq. feet residence are still interesting, protected by an overhead shelter. 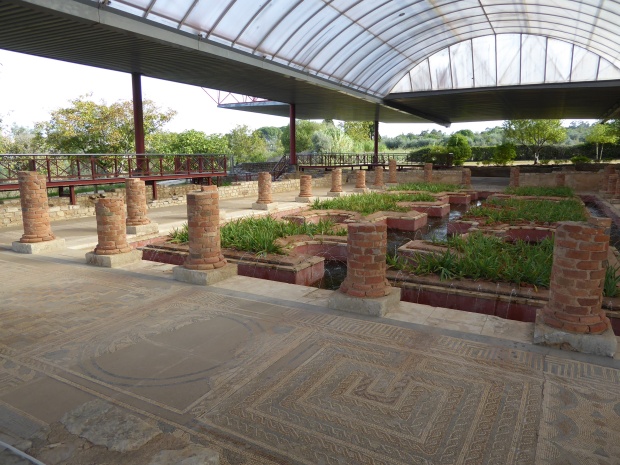 The courtyard of the House of the Fountains, with its pools and small fountains. It must have been very impressive 2,000 years ago. Note the mosaic floors around the perimeter of the pools. 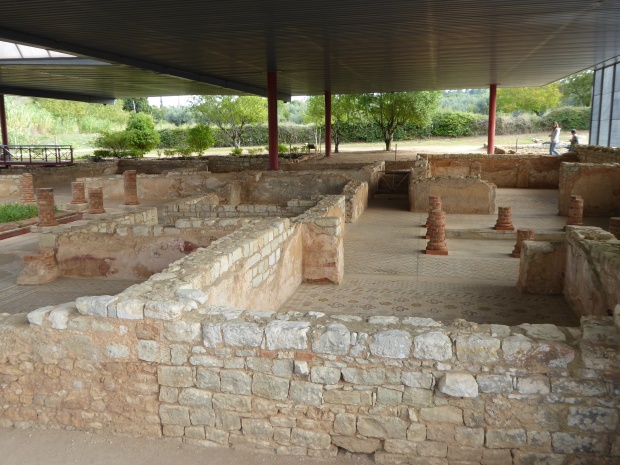 A view of some of the rooms in the House of the Fountains. 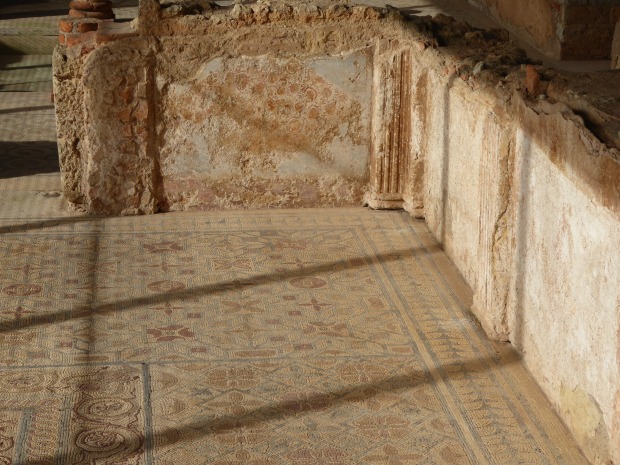 A closer look at the frescoes and mosaic floors in the House of the Fountains.

There are remains of other buildings inside the city walls, including a forum, basilica, and other dwellings. The Romans were amazing engineers and builders, their ability to construct a city layout with infrastructure that is still partially intact today speaks to their skills. 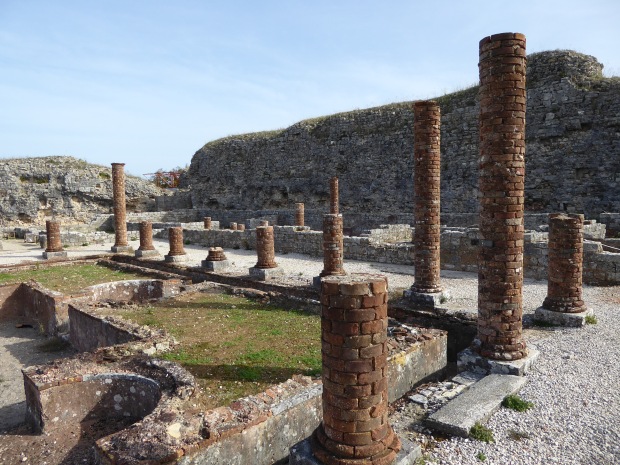 This structure is known as the House of Cantaber, constructed about 100 CE. The columns surround the peristyle (courtyard). The city walls are right behind the house. 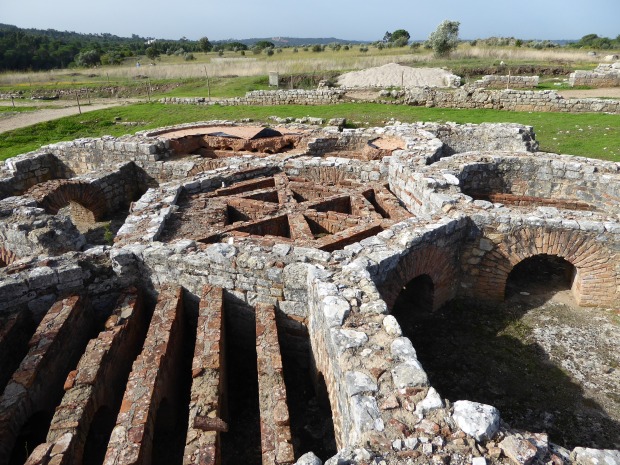 A view of private baths at Conimbriga, the foundations here date from the 3rd and 4th century. The hexagonal tanks were heated and held hot water. 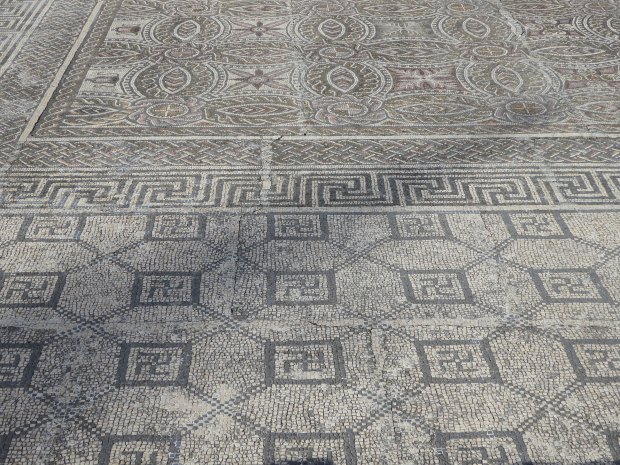 Detail of the mosaic floor of the aptly named “House of the Swastika”, excavated in 1940. (The infamous Nazi adaptation was reversed from this much earlier version) 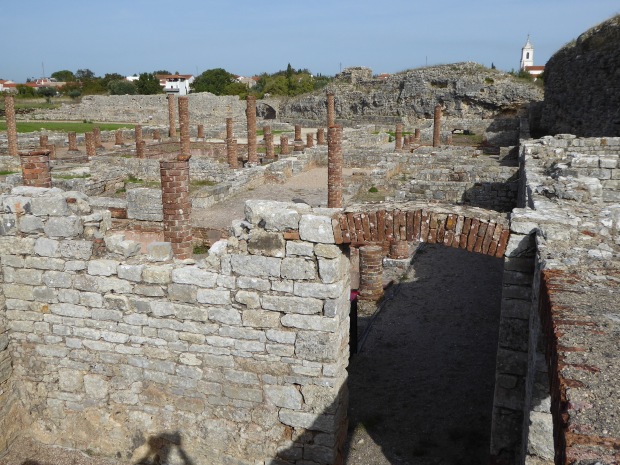 Another view of the ruins of Conimbriga.

In addition to the ruins at Conimbriga, there is a small museum on the site, and there are a few other small Roman ruins north and south (Alcabideque, Rabaçal and Santiago Da Guardia), indicating the expanse of Roman civilization in this part of Portugal.