I’ve had the privilege of visiting the islands that make up the state of Hawai’i a few times: twice to Oahu, once each to Maui and Kauai and most recently the Big Island of Hawai’i. All of the islands have their charms, but the Big Island is the most unique island in many ways. It felt more laid back, quiet and rural with fewer tourists and big resorts.

The island of Hawai’i is not only big (bigger than the rest of the Hawaiian Islands combined), but has some amazing diversity in its climate zones – from a dry and very (volcanic) rocky western shore, to the more tropical eastern side, with active volcanoes in the middle and southern central parts of the island and farm and ranch lands in the north central part of the island. The Big Island is also far less touristy than Oahu and Maui and receives about the same number of tourists as Kauai.

Below are a few sights around the island starting on the western side and working our way north and south along the west coast and then east over to Hilo and further south to Hawai’i Volcanoes National Park.

This trip was sponsored in part by Hilton Grand Vacations. On a snowy day in Colorado after booking a business trip, I was susceptible to one of those calls telling me that I could experience a vacation package on the Big Island for almost nothing, with the caveat that we listen to a presentation on the wonders of purchasing a share of an available property. To Hilton’s credit, the actual sales pitch was very low key and within an hour or we were on our way again (resort living is just not our type of vacation thing–it took us a while to convince them of this).

You could easily land at the Kona airport, head north 20 minutes to Waikoloa Village resort, and have a full, relaxing (and expensive) vacation never leaving the Village–eating, golfing and swimming all day every day. While all of this was tempting (and fun), we wanted to see more of the island, since we knew it was unlikely we would be back.

We stayed at the Waikoloa Village Resort, a Hilton property on the northwest coast of Hawaii. The resort has hotel rooms and condo properties. It’s about 20 minutes north of the Kona Airport.

The Waikoloa Village is of course beautiful, set right along the rugged volcanic coast with many amenities. 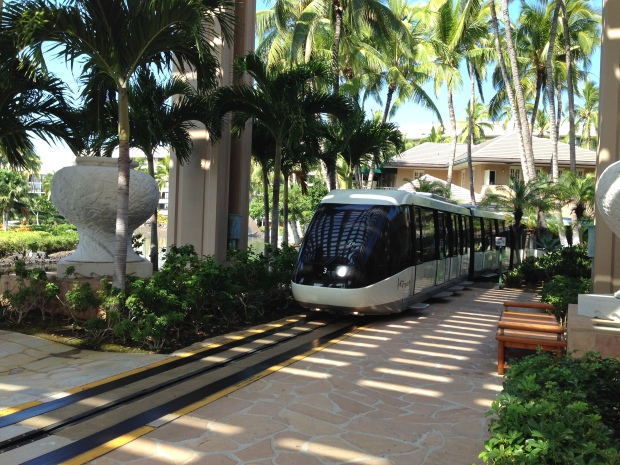 The Waikoloa Resort is so big that you take a tram or water taxi to your room from the main entrance.

This photo was taken just south of the Waikoloa Resort, along the Kohala Coast. Much of the island is volcanic rock meaning white sand beaches are few and far between. Since the coast is not heavily developed, many spots can be found for a quiet picnic.

Near the Waikoloa Village is the ancient King’s Trail. This trail was used by Hawaiians from about 1400 – 1800 CE as a transportation route along the coast. You can walk along parts of the trail, with signs to guide your way and explain the historical features. 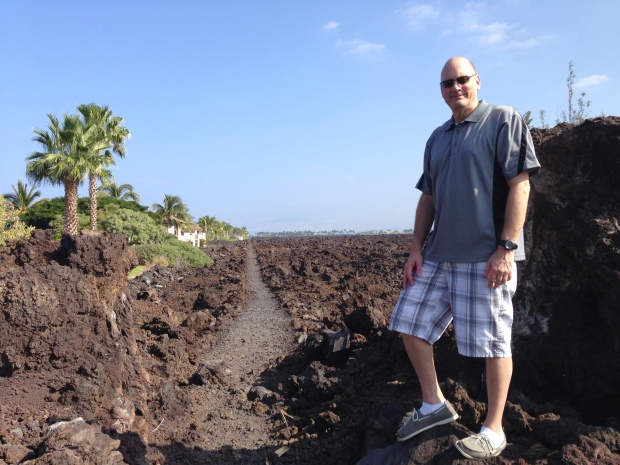 The Waikoloa Kings Trail winds its way through the pretty barren volcanic landscape. 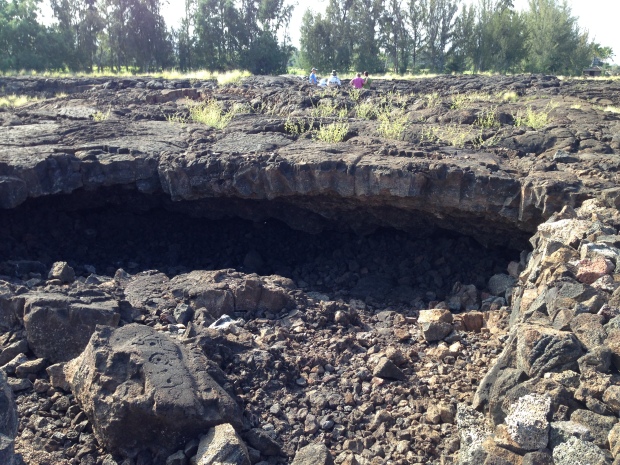 Along the King’s Trail. Overhanging cliffs like those shown here provided protected overnight camping spots for the ancient Hawaiians. In the near lower left foreground petroglyphs can be seen on the rock.

Examples of other petroglyphs along the King’s Trail.

From Waikoloa Village, we explored north and then south along the west coast.

Like much of the Big Island, this part of Hawai’i is quiet and felt pretty remote, with just a few tiny towns and lots of open hilly countryside. It was apparent that the northern tip of the island receives more moisture than most of the western side.

This is the original statue of King Kamehameha, commissioned and cast in 1878. The King’s birthplace is near here. He united the Hawaiian Islands in the 18th century. This statue is found in the little village of Kapa’au, at the northern end of the Big Island. 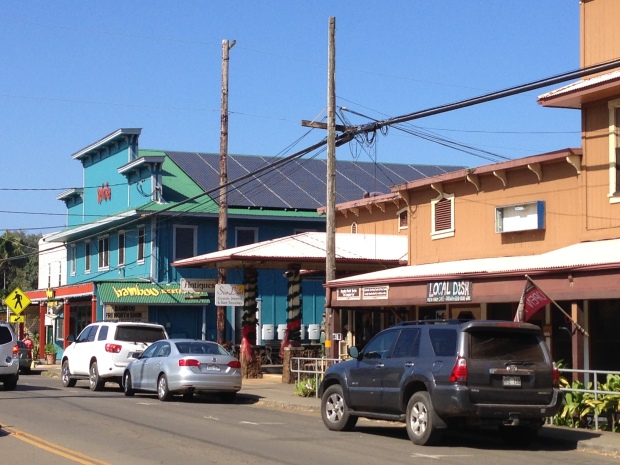 The little village of Kapa’au in North Kohala, a town that doesn’t feel like it’s changed much over the years.

Continuing a little further along the northern coast of the Big Island from Kapa’au, is Pololu Valley Lookout. Given the rugged terrain, you have to back track through Kapa’au to continue going south and east around the island. 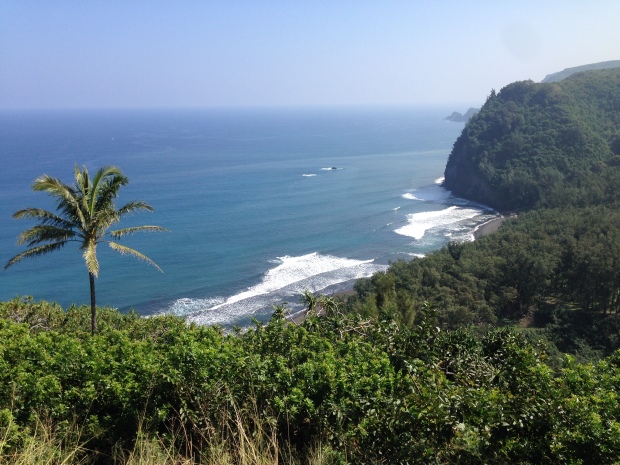 This is a view of Pololu Valley Lookout, just east of the town of Kapa’au. There is a steep hike down to the black sand beach, it took us about 30 minutes to reach the shore.

Going a little further east along the northern end of the Big Island from Kapa’au, is the village of Honoka’a and Waipi’o Lookout. 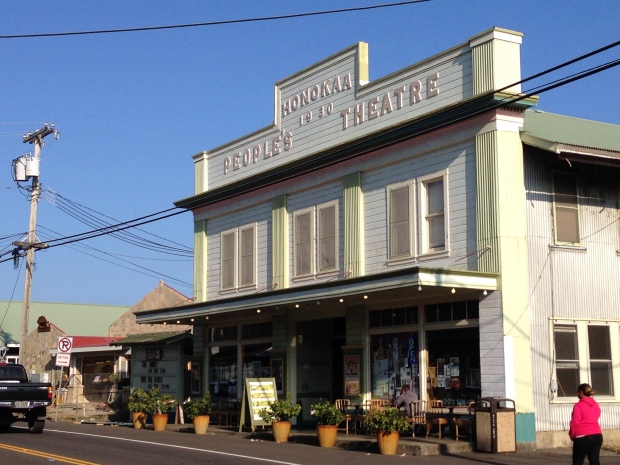 Downtown Honoka’a, the People’s Theater from 1930, a place that feels like old town Americana. With 525 seats, this theater presents films, concerts, dance recitals and classes. 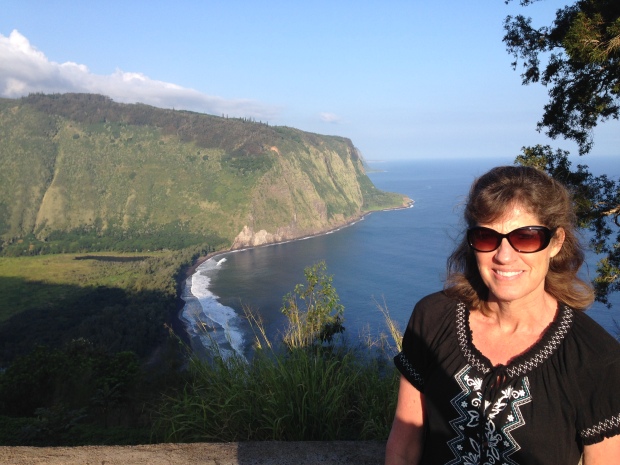 This is the Waipi’o Valley Lookout, near Honoka’a. The island has lots of deserted beaches, due to their limited accessibility.

This section of the island is drier and is the “urban” center of the island, with most of the shopping and restaurants along this part of the coast, south of Kona airport.

A view of Kailua-Kona area, the main center for services and shopping on the Big Island’s west coast. There isn’t much of a “downtown”, just a series of small shopping centers and neighborhoods stretching for miles along the coast.

As you continue south for Kailua-Kona area, you come across some other interesting sights.

We visited this little church in the town of Honaunau, south of Kailua-Kona, known as Saint Benedict’s Painted Church.

The interior of Saint Benedict’s was painted right around the end of the 19th century. A Belgian priest used the biblical scenes to teach the natives who could not read. The interior reminded me a bit of the Scandinavian painted churches we have seen during our other travels.

Don’t ask me to pronounce the name of this Park, but this is an interesting sight right on the coast and a very sacred spot to Hawaiian natives. It was where Hawaiian royalty lived and it now serves as a historical educational park. This park is just due west from the Painted Church above.

The setting of Pu’uhonua O Honaunau National Historic Site is quite beautiful–the royals knew how to pick a good location!

You get a map with your entrance fee, and walk from point to point to learn more about ancient Hawaiian customs, skilled craftsmanship and way of life.

In the shadows at dusk are examples of native carvings near the entrance to Pu’uhonua o Honaunau National Historic Site. 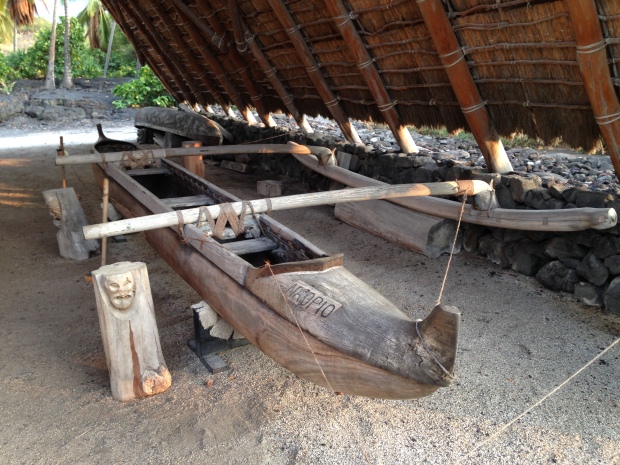 Example of an outrigger canoe, showing construction from traditional materials.

After exploring north and south along the west coast, we crossed over to the east coast of the Big Island through Waimea, a ranching area that reminded me a bit of Colorado.

The countryside of Waimea, this scene looks like it could be in Colorado or Wyoming or New Mexico!

There are not many driving routes across the island, and this route is the main one. As you reach the east coast, the climate zone shifts to a more tropical feel, clearly this side of this island receives more moisture than the west coast. The northeast coast of the Big Island, known as Hamakua, is rugged and the surf is rougher than on the western side. It has a wild beauty, with the dark volcanic rock contrasting with the dark green vegetation. While there are numerous state parks on this side of the island, you won’t find a lot of soft sandy beaches.

Here are a few State Parks heading south along the east coast towards Hilo:

Onomea Bay, a protected cove on a rugged shoreline.

Akaka Falls is just inland from Onomea Bay, and a short hike takes you to a view of the falls.

A view of Akaka Falls.

Just few miles south of the locations above brings you to Hilo. I had expected Hilo to have  a bigger city feel and tourist vibe, but it felt very “local” and is relatively small town. It became apparent to me that most tourists hang out on the west coast, rather than Hilo. Hilo also has an airport, which makes sense given the size of the island and the fact that two 13,000 ft volcanoes (Mauna Kea and Mauna Loa) separate the east and west coasts, making travel across the island slow.

While I don’t have a photo, be sure to stop at Ken’s House of Pancakes in Hilo any time of day for delicious pancakes and about everything else! We enjoyed our meal there.

Downtown Hilo maintains its early 20th century look, I felt like I had stepped back in time to what this town must have looked like during World War II, during my Dad’s time in the islands.

Our last stop on the Big Island was Hawaii Volcanoes National Park, south and west of Hilo in the southeastern part of the island. This is a big park, one could easily spend several days exploring the various features, hiking trails and sights. Volcanic activity on the Big Island is seemingly constant, so parts of the Park may be closed at any given time. Due to the dangerous gases, you are not allowed close to any active craters. 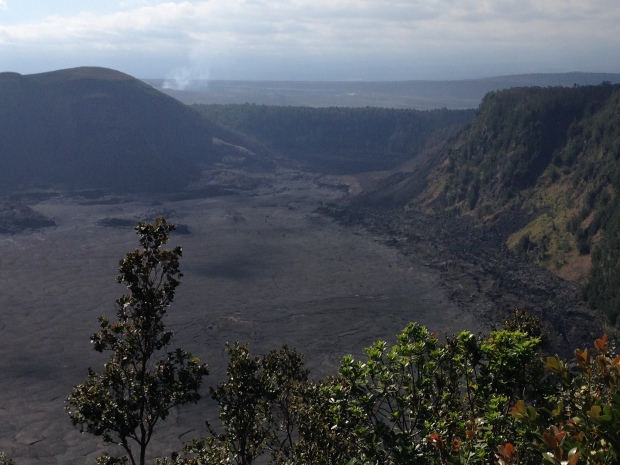 The Kilauea Iki Crater, the lava flows here are from 1959.

The entrance to Thurston Lava Tube, close to the Kilauea Iki Crater. 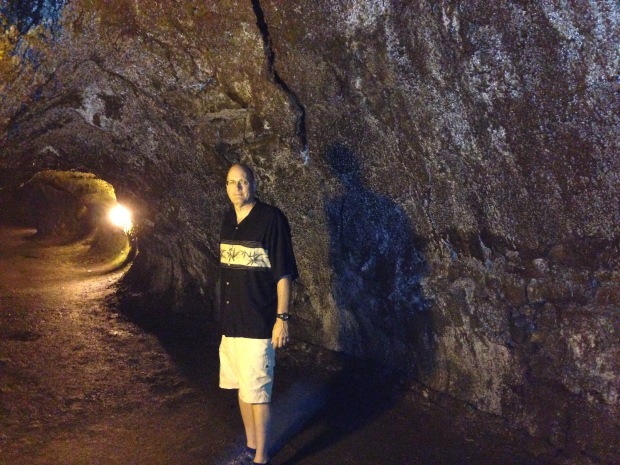 Inside the Thurston Lava Tube.

Steam vents in the National Park, everywhere you go there are reminders that you’re standing on active volcanic soil.

The sulphur banks near Kilauea Caldera, wow, you could smell the sulphur! 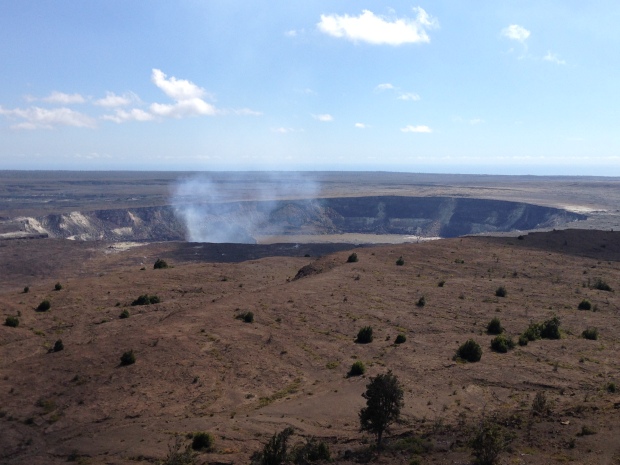 The huge Kilauea Caldera, this is about as close as you can get right now. There are trails in the Caldera, but they were closed due to volcanic activity during our stay.

If you enjoy exploring, try the Big Island of Hawai’i and remember there’s more to do than just hit the beach, pool or golf course!