If you’re up for a very full day trip from Porto, Portugal then consider adding a visit to the town of Lamego after Guimarães. After our visit to Guimarães Castle and the Ducal Palace, we continued on to Lamego, which is 119 km (74 miles) east from Guimarães. This drive is quite pretty, winding through the hills and valleys of the Douro Valley, the great wine producing region of Portugal.

Our primary reason to visit Lamego was to see the Santuário de Nossa Senhora dos Remédios (Our Lady of the Remedies), an 18th century Baroque church which sits on St. Stephen’s Hill (a pilgrimage site), with a fine view of Lamego. This church is on one of the routes pilgrims have taken when traveling to Santiago de Compostela in northwestern Spain. It is known for its beautiful stairways and decorative landings leading up to the church itself. 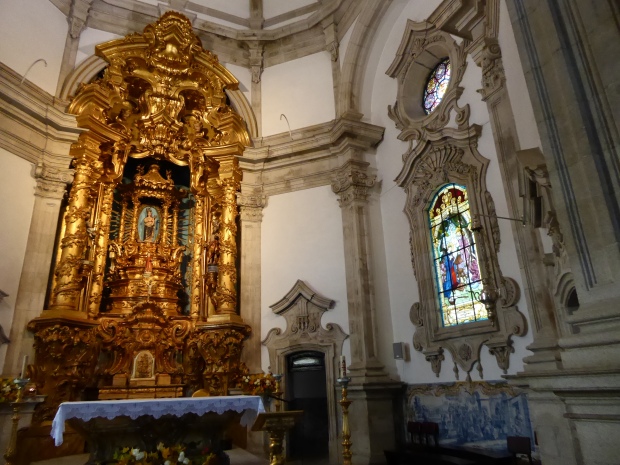 One of the nine landings and some of the 686 steps which climb St. Stephen’s Hill to the Santuário de Nossa Senhora dos Remédios. Many of the landings have beautiful tile artwork.

In addition to the Santuário de Nossa Senhora dos Remédios, Lamego has an interesting and very historic Cathedral, which dates from the mid 12th century. It is located in the heart of the town, a short distance from the bottom of St. Stephen’s Hill. Its construction was commissioned by the 1st king of Portugal (Afonso Henriques).

A view of the Lamego Cathedral. The bell tower on the right dates from the early 1100’s. 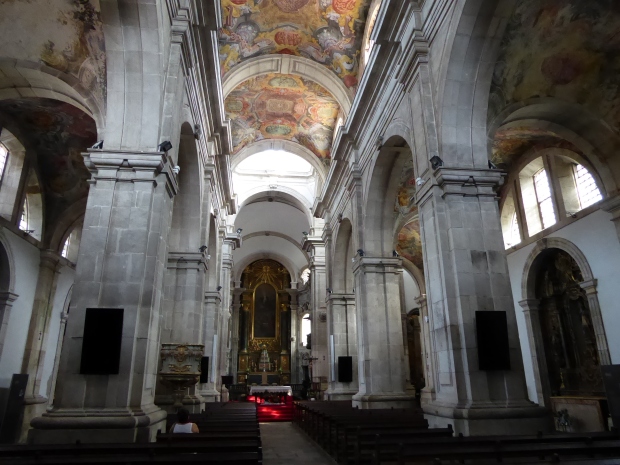 Interior of the Lamego Cathedral.

The decorative door portals on the Lamego Cathedral were completed in 1514. 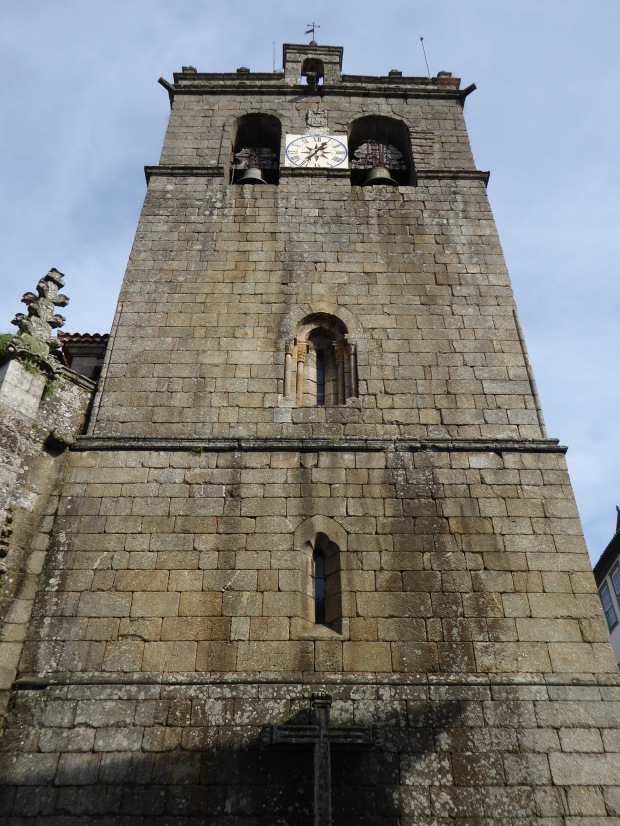 A closer look at the 12th century bell tower of the Lamego Cathedral, which also served as a prison starting in the 1400’s.

Another gem in Lamego is the Chapel of São Pedro de Balsemão (Chapel of St. Peter). This ancient chapel (which dates to 600 CE) is a bit hard to find–it sits below the main town in a little narrow valley, but we managed to find it.

Exterior view of the Chapel of São Pedro de Balsemão, which belies its 1500 year-old interior.

Interior of the Chapel of São Pedro de Balsemão. Stones from a nearby Roman Villa were used in its construction (the tomb is from the 14th century, a Bishop of Porto).

This statue of Mary, found in the Chapel of São Pedro de Balsemão, was sculpted from white limestone in the 14th century.

On the fastest car route from Guimarães to Lamego lies the town of Vila Real. This town is home to the scenic 18th century Mateus Palace. This palace is privately managed and is quite pricey to visit, so we stopped only for a quick walk in the gardens and to view the exterior of the palace. It was a worthwhile stop. 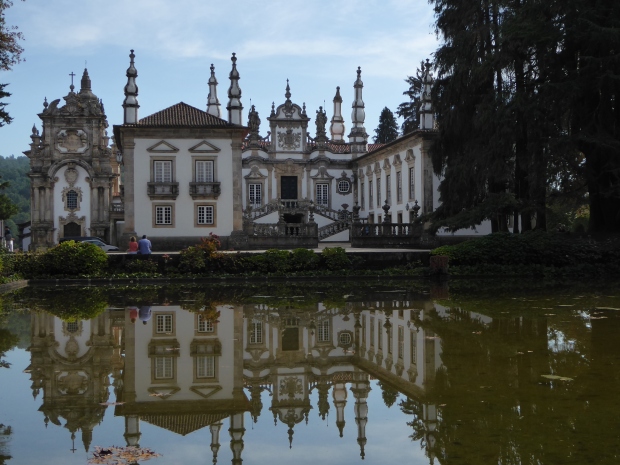 A postcard view of Mateus Palace.

Exterior view of the chapel of Mateus Palace.

View of the neatly manicured gardens of the Mateus Palace (the palace chapel is in the background). 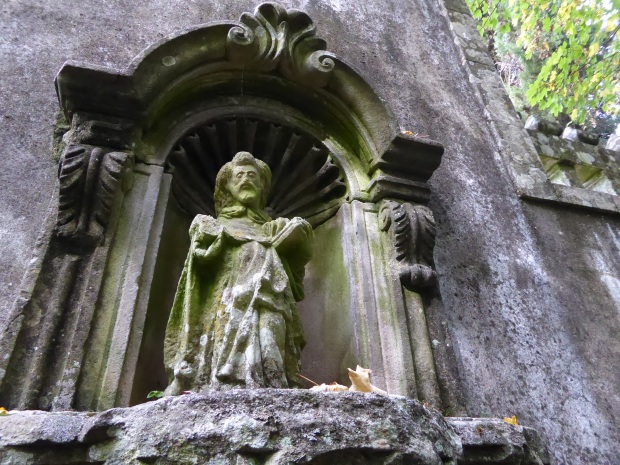 A little fountain and statue in the gardens of Mateus Palace. 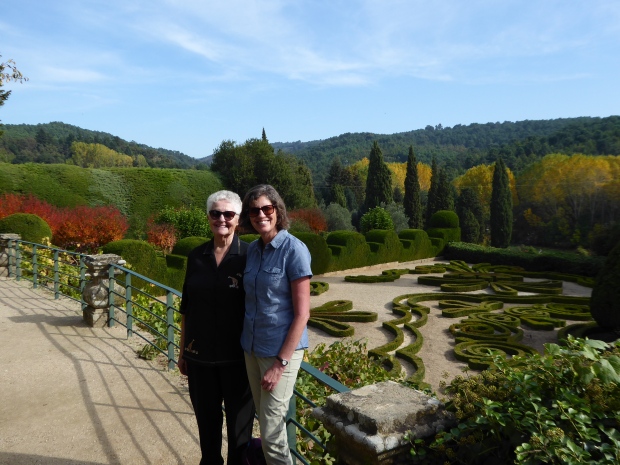 Another view of the gardens and surrounding countryside of Mateus Palace with my wife and mother-in-law.

This little town and castle is in a completely different direction from Porto than the sights mentioned above. Santa Maria da Feira is directly south of Porto about 32 km (20 miles). The reason to visit this town is for its historic castle, which although small, is  pretty classic-looking and worth a visit. There has been a fortress on this spot since the 10th century, it was a strategic stronghold for the reconquest of the Iberian peninsula from the Moors. The current castle dates from the 1400’s. 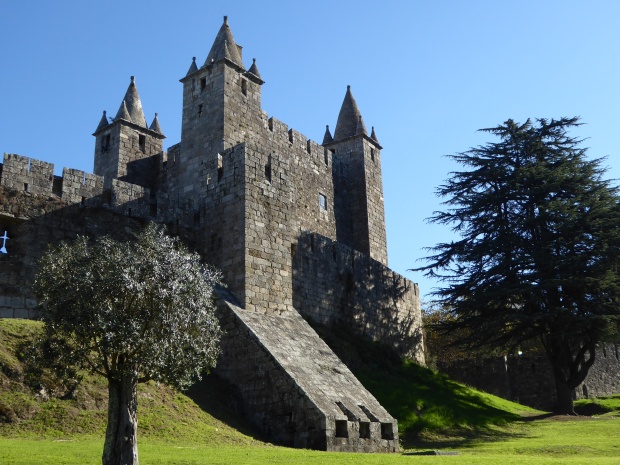 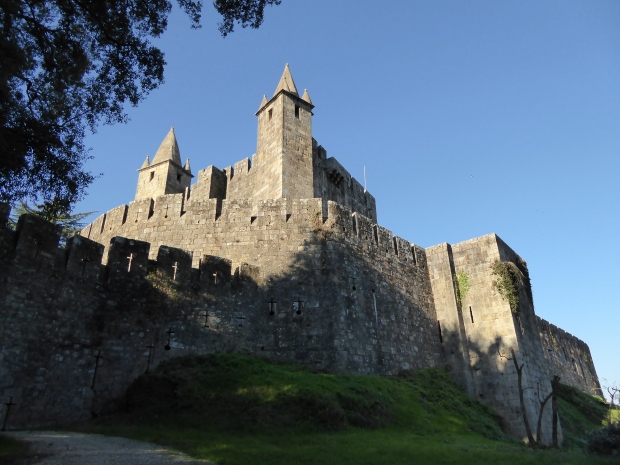 Another view of the castle from the side opposite the first photo.

Courtyard of the castle. 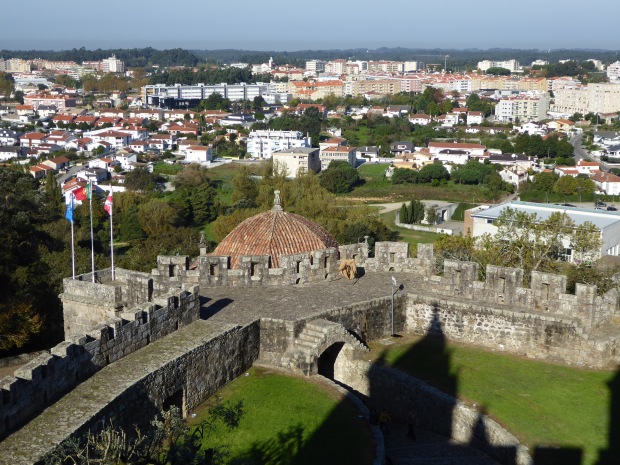 View of the town of Santa Maria da Feira from the castle roof.

During our visit to the castle, they were setting up for a Halloween party, what better place than an actual medieval castle!