We flew to the island of Rhodes from Athens, about a 50 minute flight on Aegean Airlines. The Rhodes airport is on the west coast, about 20 km from Rhodes town, which is located at the northern tip of the island. The old medieval city is surrounded by the newer city. Several of the island’s west coast bus routes stop at the airport; it’s an easy way to get into town, and only costs €2.30. The bus station is just a couple blocks outside the old walled city, and near the Rhodes harbor.

I have enjoyed reading about the history of the medieval Christian Crusades, and therefore Rhodes has been on my priority list of places to visit. I was excited to have the chance as part of our trip through Greece. Although Rhodes history goes back to ancient times (408 B.C.), the old walled city dates to 1309, with the arrival of the Knights of St. John (from Cyprus, and prior to that the Holy Land), whose charter was to defend the Holy Land and care for pilgrims enroute. The Ottoman Empire finally conquered Rhodes in 1522, and consequently there are several old mosques in Rhodes (we did not find any of them open).

Although Rhodes has much to offer, in this post I will focus on the Old City. In other posts I will cover our tour of both coasts. 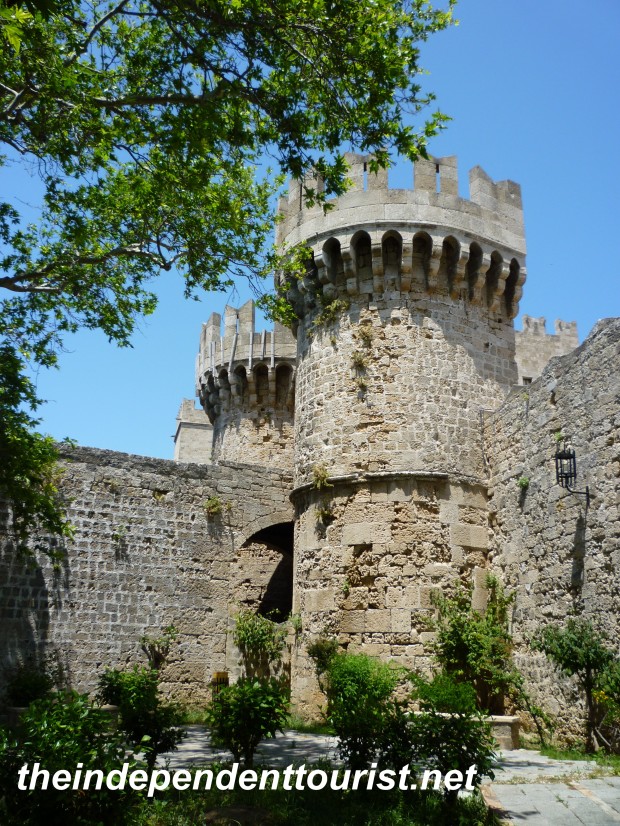 Built by the Knights of St. John to defend against the Barbary Pirates and the Ottoman Empire, the walls of Rhodes Old Town are extensive and massive-2.5 miles in length. One can walk in the large moat between the outermost wall and the inner wall that surrounds the city to get a perspective on the height and circumference of the fortifications. One entry point to the moat area is near the Grand Masters Palace. Huge round granite projectiles are found in the moat area-which date to 305 B.C.

Street of the Knights and the Grand Masters Palace 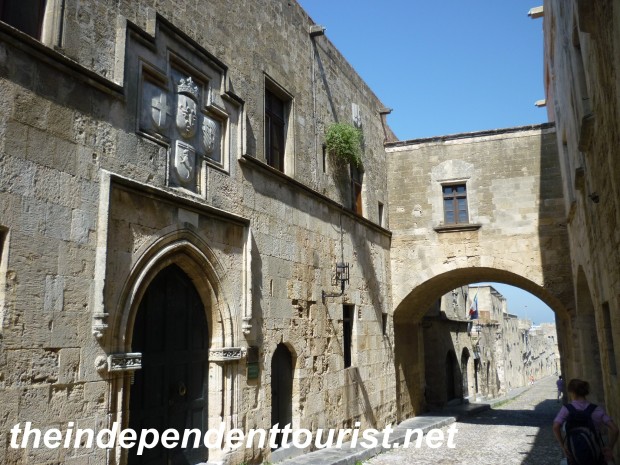 The Street of the Knights contains the “Inns of the Tongues” –where the Knights from the different regions of Europe met, and were organized by language (7 groups) along this cobblestone street. The façade of both sides of the street is well preserved. 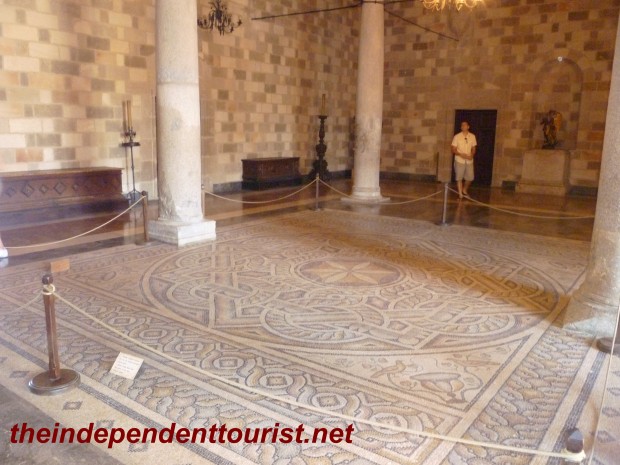 At the high end of the Street is the Grand Master’s Palace, home of 19 Grand Masters of the Knights of Rhodes. Built in the 14th century with many beautiful Greek and Roman floor mosaics, and statues largely taken from the nearby island of Kos. The palace is constructed around a large atrium. The Palace was restored early in the 20th century. It is a massive structure and definitely worth visiting. 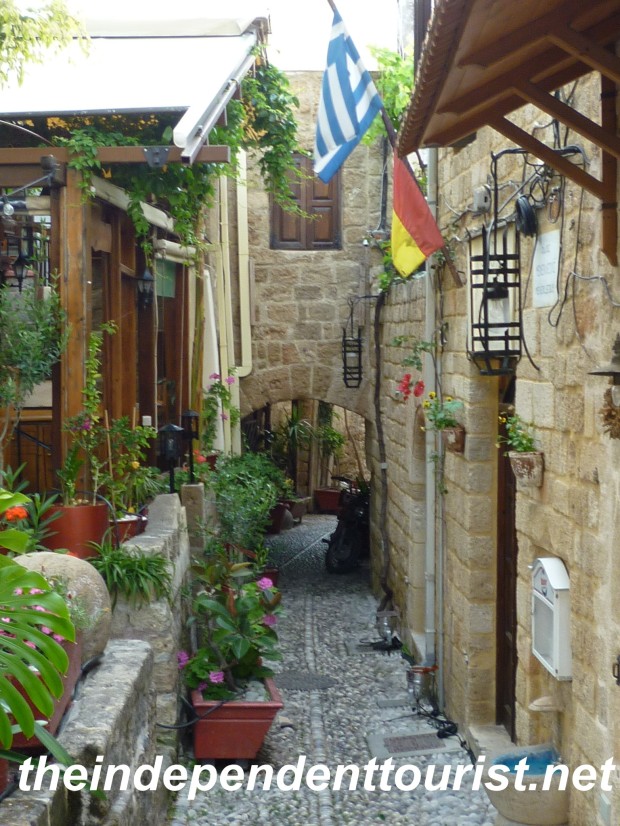 Streets of the Old City

We enjoyed wandering the streets of the old city. The main route is crowded with tourist shops catering to the cruise ship crowds, but if you get off the main street you will find quiet back alleys that are fun to explore and have great restaurants at lower prices.

Choosing our dinner at Mpoukia…Mpoukia!

One of the restaurants (Mpoukia…Mpoukia!) we ate at was a traditional Greek kitchen where we went back into the kitchen and ordered from the dishes prepared for the day-just like home! Many alleyways have arches supporting the buildings on either side of the narrow streets.

Sitting on a hill (Monte Smith) to the southwest of the town of Rhodes is the ancient acropolis (which is free). We drove up to the acropolis with our rental car. The guidebooks barely mention (if at all) this sight, and we were surprised that there was more to it than what we thought. There are the ruins of the Temple of Apollo Pythios, a theater where you can find the “sweet spot” of perfect voice projection, and a very well-preserved (and restored) 2nd century B.C. stadium (where you can actually do a foot race!). In the general area, signs point to other small ruins.

We stayed at Hotel Attiki, a 500 year-old building in the heart of the old town, just one block off the historic Street of the Knights. The location of this hotel is fantastic and the operators are extremely friendly. The hotel has a nice elevated outdoor courtyard and free wireless internet.

Other Things to Do

We spent three days on Rhodes, which gave us time to sufficiently see sights on both coasts, and the Old Town without feeling rushed. 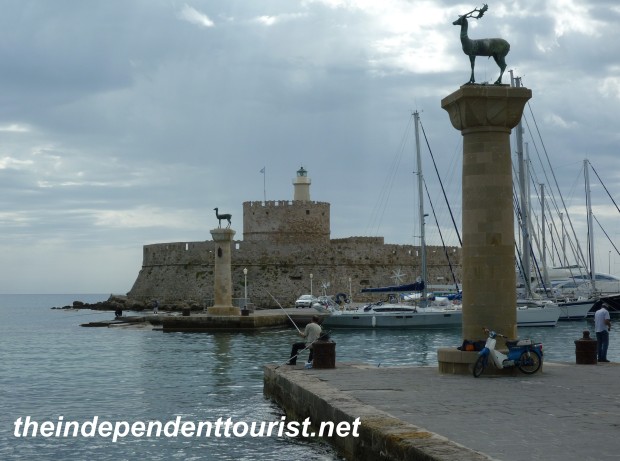 From the harbor, there are many local boat tours that will take you on day trips to Marmaris, Turkey, as well as other Greek isles (Symi, Kos) and tours around Rhodes Island. A week on Rhodes would provide plenty of time to do some of the tours to nearby locations.

Reference: Rhodes: The island of the Sun, A Tourist’s Guide to the City and the Country Side, Marmatakis Brothers, Crete (no publication date given).