We spent one of our days on Rhodes driving down the East coast to Lindos. We rented a 5 passenger car at Margaritis rent-a-car in the new town of Rhodes for €30 per day (inclusive of all fees). The car rental is within walking distance of the Old City. As mentioned in my Greece Overview post, gasoline is expensive in Greece, about $8 per gallon. However, renting a car is an economical way to transport 5 people and to have the freedom to stop wherever you want.  Gas stations are plentiful throughout Rhodes.

View from the Acropolis, Lindos, Rhodes.

Our first (and farthest) stop was Lindos. Unfortunately, it is a very popular cruise ship day tour from Rhodes, so we had to contend with a lot of people in the little town as well as making their way up to the Acropolis. I was wondering if we would run into the same issue on the rest of the island, but outside of Rhodes old town and Lindos, the rest of the island is pretty quiet, especially the west coast.

Hiking up to the fortress on the Acropolis, Lindos, Rhodes.

Lindos is about an hour’s drive south from Rhodes.  On the way, just outside of Rhodes, there are a fair amount of beach resorts and hotels (especially around Faliraki Beach).  The further south you go, the quieter the island becomes. Lindos is a great sight, with the glistening white town nestled below its Acropolis, set on the rugged coast line, with beautiful bays both to the north and to the south of the Acropolis hill. A few parking spots are available on the road leading in to town, at the turnoff from the main road.  It is just a minute walk down to the village square. 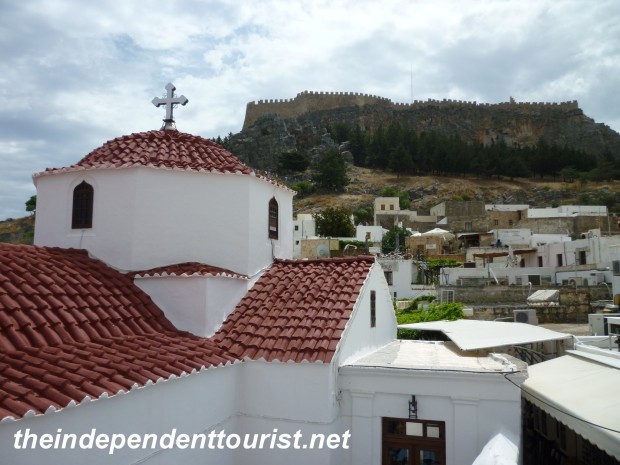 The town of Lindos is full of whitewashed buildings along pedestrian walkways filled with souvenir shops, restaurants, and even pedicure establishments—have your feet brushed up by the little fish in the tank!  Be sure to stop in the Byzantine church of the Panagia, (rebuilt in the 15th century) and admire the view from the stairs of the bell tower, and the 18th century frescoes inside the chapel.

The settlement of Lindos goes back to Neolithic times (3rd millennium B.C.), but the Greek history starts around 1,200 B.C. The Acropolis has a combination of historical sights, ranging from 4th century B.C. Temple of Lindian Athena to the fortifications and churches of Knights of Rhodes in the 13th and 14th century.  There is an entry fee of €6 to the Acropolis.  The views of Lindos town, and the bays north and south of the acropolis are excellent, and one can easily see why it was such a strategic settlement given the commanding views and natural harbors. 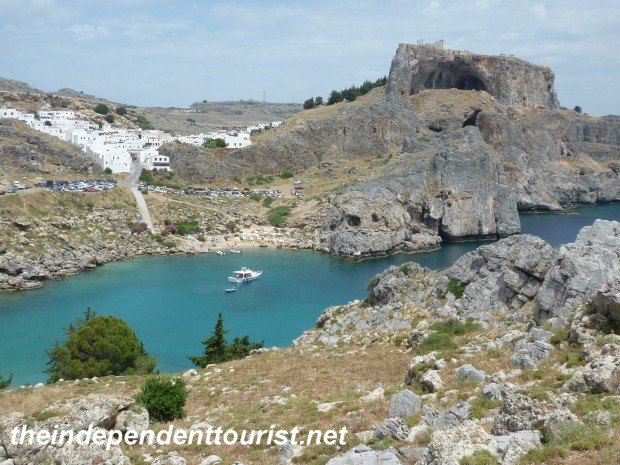 From the Acropolis, looking to the south, is St. Paul’s bay, where the apostle Paul set shore. To reach the bay, just continue south on the main road a few hundred yards.  From the dirt parking lot, one can hike down to the beach or hike up the rocks for an excellent view of the bay with the Acropolis in the background.

Our Hotel Attiki host, Mara, told us about ‘Anthony Quinn Beach,’ which is north of Lindos, about halfway back to Rhodes.  There are little hand-painted signs on the main road and on the side road that guide you to this bay, just a kilometer or so off the highway.  There are other beautiful bays close by too.  I guess that Anthony Quinn holds a special place in the Greeks’ hearts due to his movie “Zorba the Greek” (1964).

This bay is beautiful and calm, but rocky.  I personally don’t mind rocky beaches—less sand to get into everything! There are restrooms here for changing clothes, and lounge chairs that can be rented for €3 per day.  The water is very clear, and we enjoyed swimming here.  If you have a pair of water shoes, bring them!  Even though it was still in May, the water is cool but warm enough to swim in.  I would guess the water was in the low 70’s F.

After our swim, we decided to drive back to Rhodes via the “Butterfly Valley” route which winds up through the hills of Rhodes, and the vegetation changes from dry scrub brush to evergreen trees.  Butterfly Valley is famous for the colorful moths that come out June through September due to an attraction to the storax trees.  We were there right prior to the peak season and saw just a few moths.  The walk up the valley along the beautiful stream reminded me of being in the mountains in Colorado.  We hiked all the way up to the Kalopetras monastery (a tiny church complex) built in 1782, supposedly 800 meters from the starting point, but it seemed more than a kilometer total.