Our next stop in China after Beijing was the city of Xi’an, which was put on the tourist map after the discovery of the Terra-Cotta Warriors. A farmer in the mid 1970’s was digging a well, and discovered what is now called Pit 1, the largest of three Pits with lengthy columns of carefully placed warriors, horses and chariots. The warriors are part of the funerary art created to protect the first emperor of China (Qin Shihuang) in the afterlife and date from about 210 BCE. The emperor’s tomb is about 1 mile away. The massive effort required to create such a display reminds one of the Great Pyramids of Egypt. Although it seems a shame to have buried such amazing art, thank goodness it was, because we now are able to appreciate it 2,000 years later.

The Terra-Cotta Warriors museum is about 45 minutes by bus outside Xian. What impressed me most about the museum is its immense scale, I had no idea the museum was as large as it is, with 4 buildings, covering Pits 1, 2 and 3 and a separate building that houses the bronze chariots and other figures also discovered here (don’t miss this building during your visit).

The entrance to the Museum. This was a moderately busy day!

They are called “pits” because they are literally earthen pit shelters where the terra-cotta warriors were buried.

Given the size of the museum complex, our tour guide did the right thing by giving a quick overview and then letting us wander the site on our own for a couple hours. We visited right before the start of the Chinese National Holidays, and I was glad we did. The museum was still busy, but less so than it would be just a few days later, when our guide said the line of traffic to get to the Museum was 10 km long! The Terra Cotta Warriors Museum is probably the #1 attraction in China for locals as well as tourists.

Pit 1 is the largest exhibit, but because of its scale, it’s a little more difficult to get a close observation of the warriors. It contains about 2,000 warriors and horses.

Entrance to Pit 1, the largest of the three Pits.

Most people stop (and clog) at the view by front entrance, but make your way around to the sides (visit both sides) to get other interesting views of the warriors. Be prepared for lots of shoving and pushing as you deal with the mobs. Hang on to your belongings carefully!

View of Pit 1 near the entrance. Quite a sight to behold. 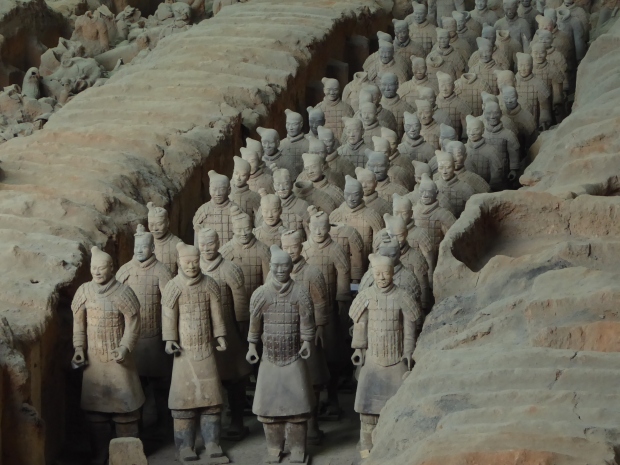 Another view of the warriors in Pit 1.

A side view of Pit 1. The original discovery was made from the digging of a well near the lower right of this photo.

A little closer view of the warriors. Their headgear denotes their rank. You can also see a bit of their color here. 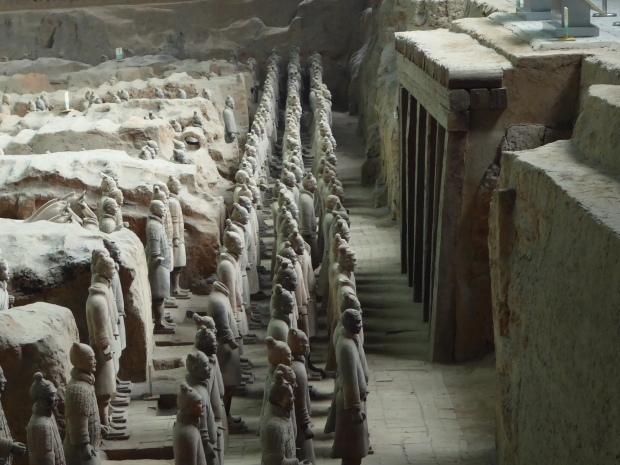 A closer side view near the front entrance of Pit 1. 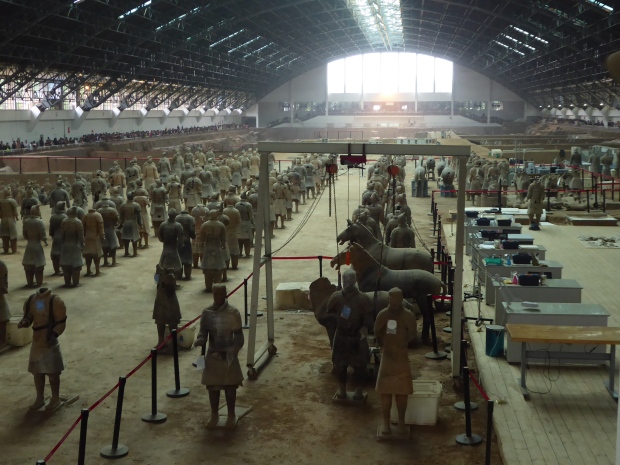 At the rear of Pit 1, the painstaking restoration work on the terra-cotta figures continues.

Pit 2 is the smallest of the three pits, and excavation work continues here. It was discovered in April 1976, about two years after the discovery of Pit 1. 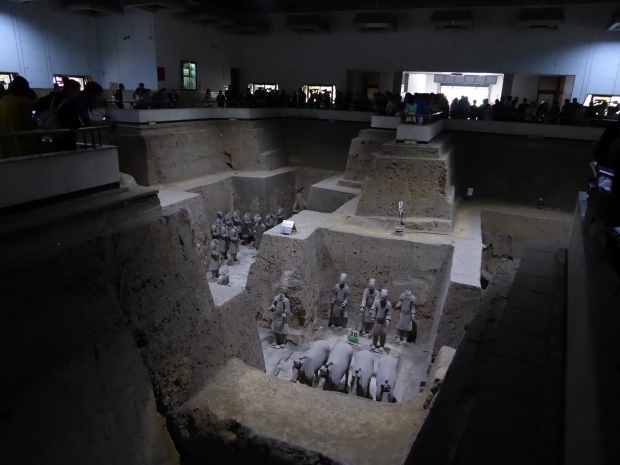 This is a view of Pit 2, the smallest of the three. It consists of more variety of figures than Pit 1, with archers, chariots, calvary and infantry. 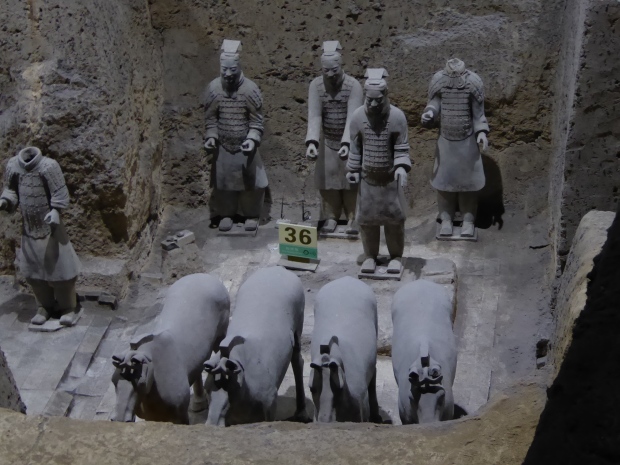 Pit 3 was the last to be discovered, in June 1976. Extensive damage to the figures in this pit occurred anciently. It was the “command center” for the warriors in the other Pits.

A view of the original sloped entrance into Pit 3.

View of Pit 3, showing the original earthen coverings and entrances into the Pit.

Another detailed view of Pit 3, showing how all destroyed pieces have been labeled.

In a separate building you will find perhaps the most amazing pieces of art at the museum, including two bronze chariot displays from the same era as the terra-cotta warriors.

The building where the bronze chariots are located (on the basement level).

These chariots were discovered in 1978, near the emperor’s tomb, and brought to this museum for display. They are amazing in their detailed craftsmanship and have survived well over the centuries. They are made of bronze and painted, with some use of gold and silver too. They are on a 50% scale to full size. 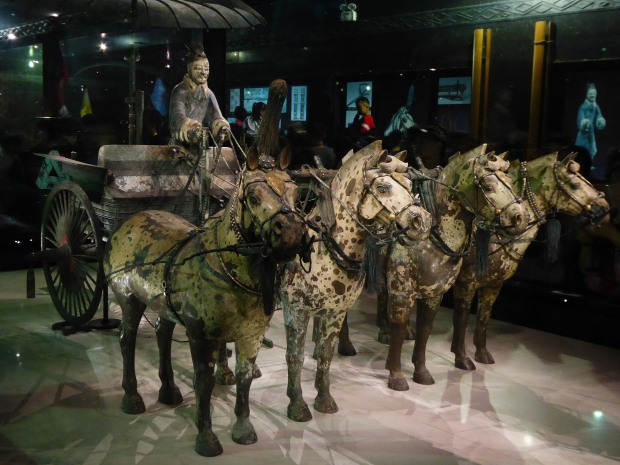 One of the bronze chariots.

The second bronze chariot. The horses look so lifelike! Note the figure in the cart behind the horses.

This figure, along with a number of other figures and artifacts are located in the same building as the bronze chariots. This guy is one of seven generals found in the Pits. His armor, headgear and neck bows all point to being a high-ranking officer.

I’m not sure of the story behind this boat carved from jade, located in a hallway in the building with the bronze chariots. It has nothing to do (as far as I know) with the Terra Cotta Warriors, but it is an incredible piece of art!

Please note that you enter the huge museum complex in one direction, and on your exit  you go a separate direction through a myriad of food vendors and shops. The displays were quite colorful and entertaining! 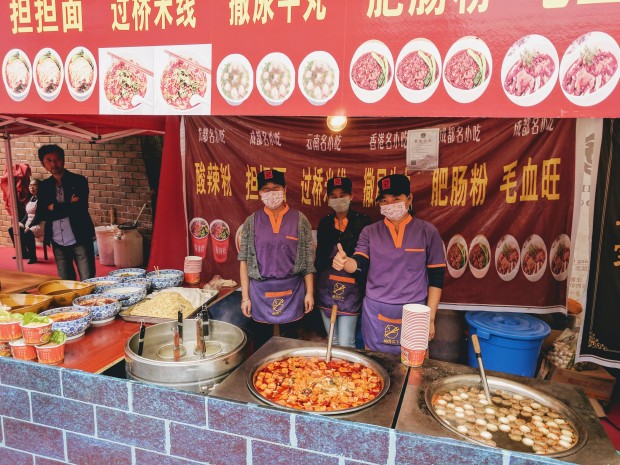 Old central Xi’an itself is quite a stunning city, and in my next post I’ll share a few pictures of central part of the city.